King of the big bores: The 500Exc has a long and awesome history as a bike that can win titles or conquer local hill climbs

The 500EXC needs no introduction. As KTM’s best-selling bike in 2013 and the enduro category’s third highest-selling bike, the big unit is no stranger in the bush and on the race tracks.

Just allow me to bitch a little here: the DR-Z400E is second on the FCAI’s list, which is ridiculous. It’s a magnificent trail bike — not an enduro bike — and should be categorised as such. For the sake of clarity, the WR450F is numero uno.

Toby Price throws the 500 around like it’s a toy; there aren’t many better sights than Toby in full flight on the thing. And when you see him doing it you have to remind yourself that this is a true big bore and not a quarter-litre screamer.

In the bush, for the not-so-Toby (like the rest of us mere mortals), it’s a go-everywhere and do-anything machine that offers the ability to take on snotty trails and absolutely destroy open sections. 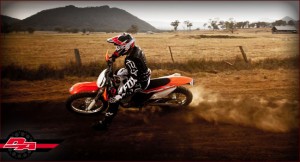 I reckon the formula is pretty simple: the 500 appeals because you can ride it however you want and it will comply. You can try to lug the 350 but you won’t get anywhere because it needs to be fed revs. The 300EXC can be toyed with but, the millisecond that throttle passes a certain point, it will leave the building in a hurry and you’d better be ready for that.

The 500EXC has the ability to bolt with a furious outburst of torque and epic trail of roost, but it will only do it if you ask it to. It never really sneaks up on you and yells “Boo!”

The EFI is so smooth these days that in stock trim the 500, and the 450 for that matter, are kind of losing that X-factor and becoming more the bike for the everyman than the bike for the man-enough. A lot of you would remember the angry turn that the old 520 and 525 could throw down. Of course. an exhaust change can bring out the horns — but when you’ve got a bike with that much power that affords you so much control, why mess with the formula?

If anyone has ever attempted a shitty hill on the 500, they’ll know the joyous feeling of motoring past everyone at next to no revs and keeping traction till you crest, remove your helmet and watch the carnage from up top. It’s an awesome bike to climb on.

The suspension is perhaps the weakest link — even though there is no link. (That was awkward …)

For fast guys, the fork and shock need attention. The rest of us can leave it stock and be happy, but you’ll find that some work will make the bike more compliant over a greater variety of terrain — big hits in particular.

The inescapable fact of the big bore is that it’s heavier on the trails. You’ll notice this on the 500 when it comes to hard braking and, again, on quick and repeated changes of direction in particular.

It’s also the sort of bike that needs a good set of rubber underneath. You can get away with a flogged-out set of tyres on something like the 350 but the 500 will slide and push if you don’t keep at least reasonably fresh boots running.