The Kawasaki KX85 has been completely refreshed. There’s life left in the Japanese two-stroke

An all-new Japanese two-stroke? Tell him he’s dreaming. One of three Japanese manufacturers still making 85cc two-strokes has completely restructured and launched a new two-stroke motorcycle. Surely not, we thought as rumours circulated — a new two-smoke, let alone an 85cc machine. It seemed a long shot, despite the hefty cluster of young Aussies punching laps around motocross tracks on pocket rockets, all itching for a fresh mini-machine.

The market is screaming for some new mini-motocross weapons. The junior racing scene is a sea of orange. Yamaha has pimped its 85 with GYTR accessories to keep it competitive straight out of the crate, but for the most part the YZ hasn’t changed since 2003. Honda ceased production on its CR85 some time ago and Suzuki and Kawasaki have kept their little weapons mostly unchanged for 10 years, too. Well, until now, that is, as we introduce the all-new KX85.

Very. The most important parts of the Kawasaki KX85 have been completely redesigned for 2014. My last year on an 85 was in 2003. Then the KX was the widest of the bunch and I was on board the Yamaha YZ85, which had just been handed a full overhaul.

As I mentioned above, all 85s have had only slight refinements since then. I remember the KX85 having an extremely soft seat and fairly tame power and it was quite heavy. It was a very sit-in-feeling bike. Pretty much all of its shortcomings have been adjusted, redesigned or developed for this all-new Kawasaki mini-racer.

From The Outside Looking In

At first glance, the most basic of motorcycle riders will notice the extreme changes in the KX’s aesthetic appeal. The new look is designed around the biggest of the Kawasaki’s brothers, the Kawasaki KX85. It’s well advanced in looks over the previous model with a more modern appearance.

Part and parcel of the model’s slimmer look is a slimmer rider interface. The new KX85 features a new flat seat with a seamless gripper cover, a new fuel tank with a flatter top and repositioned tank cap, plus slimmer radiator shrouds and side panels — all pieces of the slimmer feel puzzle.

The seat height has been dropped from 2013, while the triple clamps offer a three-position riser and a two-stage position for a total of six positions for your handlebars. Unfortunately, Kawasaki have stuck with steel handlebars, which will no doubt be removed by almost every junior who races this machine.

The engine has been given a complete overhaul. With an increase of almost 20 per cent in horsepower across the rev range, the engine has a list as long as your arm of changes to the powerhouse. 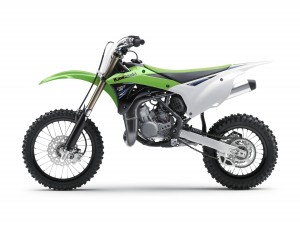 Power to the Ground

With an increase in horsepower, Kawasaki also turned its attention to the KX85’s suspension package. The 36mm inverted cartridge fork features a new shim-type valving and firmer damping rates for increased damping control and bottom resistance. The compression is 20-way adjustable and, at the base of the fork, the axle clamps have been revised for better clearance, especially in deep ruts.

At the rear of the motorcycle, the KX85 has been treated to a new KYB reservoir, which is black anodised aluminium to save weight, and a new compression adjuster allows for improved adjustability. The shock is 24-position compression and 21-position rebound adjustable.

There’s a whole bunch of finishing touches on the KX85 to complete the package: new disc brakes; a 220mm front petal rotor and 184mm rear petal rotor to improve performance and help keep mud out of the pads. The front brake hose is re-routed for 2014 and has a direct upward line for ease of bleeding and maintenance. The rear brake has also been treated to a new and stronger lever.

The swingarm surface is now easier to clean and the new front and rear fenders are reshaped to align with the big bikes, as is the front plate. The bike has new wrap-around fork guards for increased protection, while the coating on the clutch and ignition cover is grey to keep the bike looking fresh for longer. The black rims sure do look cool and complete the match with its bigger brothers.

We were lucky enough to have this machine in the DIRT ACTION Mercedes Vito the very day the embargo was lifted on the little rocket, so we enlisted the help of two groms to be the two first kids in the world to test the bike for a magazine.

I called upon long-term bike tester Brendon Walther, a super-quick young rider with a keen eye for testing a bike and a bright future in front of him. To back up Brendon’s point of view, Jake Cobbin also made the trip out to test the Kawasaki KX85. Jake also knows what side the throttle is on and together, the boys were out to give the KX a good and proper test.

The looks of the Kawasaki were enough to get the boys pumped to throw a leg over the all-new two-smoker. “It looks sexy,” exclaimed an obviously excited Walther. “It looks so good; it looks like a factory ride as its standard.”

“This thing looks sick,” echoed Jake. “It looks like a small version of the 250 or 450. It looks mad. I like what Kawasaki have done this year.”

With a couple of kicks we were off and running with Australia’s first test on the Kawasaki KX85. Brendon was first to throw some laps on the bike and despite being on the taller and heavier side of an 85 rider he was impressed straight up with the bike. After a quick switch, Jake was off and cutting laps. Although he didn’t look as confident as quickly as Walther, it didn’t take long for him to be jumping all obstacles and punching lap after lap on the Kawasaki.

With both boys comfortable, Jake punched out some sweet berm shots for the camera and Brendon threw the thing sideways like a true professional. Then the boys put the showmanship aside and began truly putting the bike through its paces.

“The Kawasaki has really good bottom-end power,” said Jake. “It’s probably as fast as my practice YZ85, which has a pipe and a little bit of work done to it.

“I’m 45kg and the shock felt a little stiff for me. That’s easily fixed with some tuning, but the forks were perfect for me. As soon as I sat on the bike I noticed the flat seat. It was so comfortable to sit on, I became comfortable straightaway.”

“You could really lean the bike over without a problem,” said an impressed Cobbin, “and the tyres have a lot of grip, especially for stock tyres. I wouldn’t do much to this to race it. I’d put a pipe on it, replace the steel handlebars and soften the suspension.

“I just loved this bike; it’s really good to ride.”

I was starting to glance at my watch as the boys began to run the second tank of fuel dry. It was difficult to get them off this thing but I had a bunch of photos to process from the day as magazine deadline loomed. With another moto in the bag, Brendon pulled up and gave his thoughts on the bike, happy he had well and truly enough information to fill me in on it.

“Initially, I felt this thing was comfy. I love the flat seat. Myself, I love a flat seat — you can sit nice and forward when you’re cornering. Everything works well with the ergonomics of the bike.

“For a standard bike, the power is so smooth. Off the bottom there’s a perfect amount of power delivery. I weigh 56kg and the engine still hauled me around pretty well; the suspension wasn’t too bad at my weight, either. The rear suspension was a bit busy and kicked around a bit, so I’d sort that out. However, the forks were really good.

“I would raise the handlebars with the standard raisers, or use higher handlebars. Fit a pipe and a few tweaks to the engine to get a little more power, have some suspension work done and it will really be a good bike for someone of my size. If I was only 50kg, you’d probably only need to do the suspension.”

Kawasaki has filled in the missing link in its arsenal for 2014. Some of the best riders in the world have ridden KX80s and KX85s over the years. Now, with an even more competitive machine, you can expect to see a lot more green among junior motocross ranks.