Balancing Act: Suzuki juggles the art of making more power while trying to keep the noise down 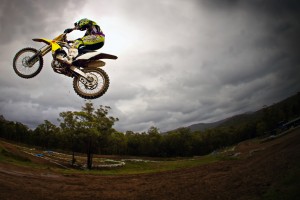 Since Suzuki went it alone in the 250cc class after the split with Kawasaki following their 2004–2006 alliance, the RMZ250 has been an impressive bike, always near the top in tests and comparisons around the world. Suzuki has a knack of making its motocross bikes fun and exciting to ride with a light, whip-it-off-every-jump feel and a quick-revving, ever-competitive powerband.

The company was at the forefront of introducing EFI into motocross and has managed to keep making strides forward with the 250Z. The 2011­–2012 models were all but the same when the GFC hit the Japanese companies and slowed development. But the wheels are spinning again for 2013 and the new model comes with plenty of updates and changes that should keep the yellow brethren excited.

Recent major race track success in Australia and the US has eluded the RMZ250, but that isn’t a reflection on the production bike as it remains one of the most popular in the class and highly regarded in racing circles. The list of changes appears to have the new model bounding forward, so we were eager to get on board and spend another day getting a little loose on the yellow screamer. 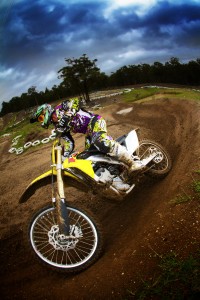 The motor gets some massaging for 2013 with a new piston, new cams, new exhaust and new transmission as well as a new ignition and the addition of EFI couplers to plug in the exact style of power you’re after. These changes are what most serious racers did to their RMZs over the past two seasons, so the production performance level should be increased for 2013.

The suspension doesn’t miss out with Suzuki introducing the Showa Separate Function Fork (SFF), similar to what’s on the KX250F. The shock also gets a revised setting to match the fork, the frame gets a tweak here and there and the graphics are updated.

On paper, all the updates are common sense changes that should increase performance across the board and keep the RMZ near the top of the pile in the ultra-competitive MX2 class. 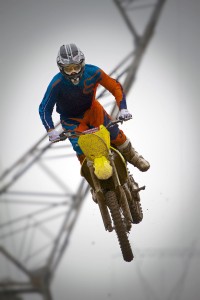 For all the changes, you’d expect the motor to be an improvement over 2012. The reality is that it doesn’t really come across on the track. It’s still eager and responsive off the bottom, has a good surge through the mid and revs out adequately at the top, but at no stage does it feel like there’s a major boost in power over the ’12 model.

My suspicion is the gains made by the lighter piston and updated cams have been offset by the new ultra-quiet FIM-approved exhaust. The RMZ doesn’t really get a chance to flex its new muscle as it feels and sounds as if it’s choked up by the new exhaust.

In the current era, riders and teams will need to find extra power in other areas as the simple solution of bolting up a bigger, louder exhaust is now out of date. While we welcome a quiet bike, the sound of the standard RMZ is hardly music to the ears of many riders.

Something that rates a mention is the new radiators. For 2013, Suzuki has upsized its radiators to reduce overheating; the RMZ had a tendency to boil and steam in mud or sand races. While we didn’t drag the bike through a mud bog for hours on end to test the new cooling system, we did keep it running for long periods of time with stop-start riding while doing photos and the usual white cloud under the bike didn’t appear.

Do he new EFI couplers work?

The system Suzuki has used is very similar to that of the KXF range where the bike comes with the stock coupler as well as a leaner and a richer one. The leaner one is for more aggressive power that pumps up the response and bottom end, while the richer one broadens the power out to make it more manageable on hard-pack or muddy tracks. It’s a simple feature that is noticeable. 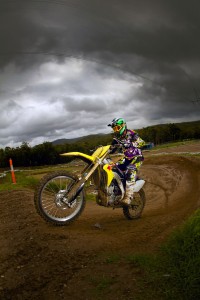 What would we do to the motor?

OK, to unleash the real potential of the stock motor, simply use the leaner coupler and match it to the exhaust of your choice. For 2013, the US will be using the 115dB limit on a two-metre max test and, unless you’re racing the MX Nats in Australia, that exhaust will pass any noise testing done here. As Europe runs an 112dB limit, all Euro-built exhausts will pass noise testing in Australia.

Those two simple changes bring the RMZ 250 to life and put fun and excitement back in the power.

For those new to the SFF units, here’s a quick breakdown of how they work. In one leg you have the compression side of the fork while the other leg controls the rebound and they work together as a bolted unit. They also offer an external preload adjuster, which is a handy tool.

Right out of the box, the fork uses up a lot of travel under heavy brakes and on downhills, which leads to some mild headshake when hauling it down from speed. It’s more of a busy feel in the front end than a full tank-slapping, bar-to-bar headshake, but with a couple of clicks firmer on the pre-load adjuster the majority of the looseness was gone. It kept the bike sitting taller in the front end, stopped the dive under brakes and gave the bike a more controlled feel entering turns.

Once the fork’s been dialled in, the bike offers one of the best rides in the class. The Suzuki traits of quick-steering, lightweight feel and precise turning are immediately evident and the RMZ is still the owner of the inside line.

Combining responsive power and a sharp chassis, the RMZ feels like a powered BMX in the handling department. It’s easy to turn, sticks a little and jumps like a Russian gymnast. We’ve long been fans of Suzuki’s take on motocross handling and the 2013 RMZ is no exception.

Despite a heap of changes on paper, the on-track difference between the 2012 and 2013 models isn’t much. But with the two easy-to-make FOC changes — the lean coupler and the fork preload — the gap starts to widen. Toss in an exhaust that enhances the power and doesn’t annihilate it and we start to see the true potential of the 2013 RMZ. It’s not the most powerful on the track but it does have strong performance across the board with a solid motor, good suspension and excellent handling.

The only thing we couldn’t test is the durability of the new transmission. But if it’s a stronger, more durable cog box than on previous RMZs, that just adds to the appeal of the new bike. And it’s still the four-stroke that’s most fun to ride.