The 350SX-F: We take the middle child who feels misunderstood but wants to be loved for a test ride 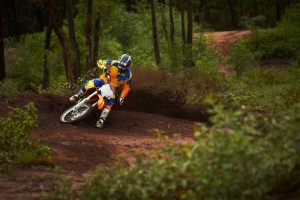 In theory, this is the bike the whole world wanted: a strong mid-sized motor in a nimble chassis that perfectly bridges the gap between a gutless little 250 and the fire-breathing 450. But has it been the success KTM expected? Sales figures in Australia have been solid but not sensational; it placed 10th on the list of motocross models sold in 2011 with 334, a nice gain over the 279 models sold in 2010.

Sales in the US have been better than that. Like Australia, it was KTM’s highest-selling motocross bike, well in advance of the company’s 250 and smashed the current 450. From a pure sales point of view, the bike worked. Maintaining those sales figures is the next challenge for KTM.

Racing has been a different story. At the highest level, the 100cc differential is huge. Riders struggled to get a start on the bike against the factory 450s and even though their lap times in testing might have been a fraction faster, doing it in race situations and passing more powerful bikes was hard work.

In the US, no factory rider is on a 350 and it looks like it will be the same story here. However, no one is 100 per cent sure what Cairoli’s bike capacity is, although it must be said that it definitely isn’t as fast as the factory Japanese bikes when looking at starts from the GPs.

And while the big race-team bikes have no real bearing out at your local track, the one thing KTM didn’t take into account was the ego of the buying public. Let’s be honest, most riders would be faster on a smaller-capacity bike, so when a guy walks into a shop and throws down money on a fire-breathing 450, that’s his ego talking. Same goes for road bikes: who needs a 160-horsepowered road bike to get to work on? No one, but that’s the male ego. And in the real world, not many red-blooded males want to turn up at their local war grounds (track) with 100cc less than their mate. Again, ego!

What does the 350 need to get back on track?

After testing the 2011 bike I felt that it needed to do either one or both of two things to get it to where it needs to be: reduce weight or produce more power — both would be sensational. The 2011 bike is only a few kilos lighter than most 450cc bikes and the Honda 450 is lighter than the 350SXF. Losing three or four kilos would be a huge gain. At a peak figure of around 46 to 48 horsepower, it isn’t grossly over-powered by a 450 that comes in at just over 50. It has a high-revving 250F style of power and that’s a difficult way to race a heavyish bike for a long period of time. Give it some low-end power and some torque in the middle of the rpm.

I’m sure KTM would have received this feedback from its race teams around the world, so when they introduced the 2012 model I was hoping for a lightweight, torque, 48hp Kato 350 that would knock my socks off. 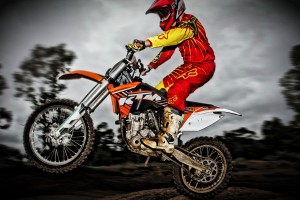 The two major areas KTM focused on were the mapping and the airboot. KTM sharpened the mapping and made the bike leaner across the board. The new airboot forces air directly into the motor and is designed to speed up response and low-end power. On paper, both of those seemed like good ideas, but with changes to exhaust, cams or other major components listed in the info pack, we were questioning if they were going to be enough.

Other updates include changes to suspension, better protection of the throttle position sensor against water, and tyres.

No doubt the power is stronger off the bottom, with quicker rpm and more oomph down low. The faster rpm gives the bike some life, so it feels more exciting to ride and makes life a little easier on the slower sections of track.

It still has that 250F-style power as the majority of the real work is done high in the rpm. You still have to rev it and rev it hard to get the most from it, but because the bottom-end is now filled in with usable, quicker revving power, the bike is easier to ride and getting to the top-end doesn’t require a locked right wrist and 100 hits of the clutch.

Is its motor better than the 2011 model?

Yes. That extra spark in the bottom-end allows power to build. The 2011 motor was flat on the bottom and would only start to motor when you got the bike high enough in the rpm.

No, KTM didn’t address any weight issues with the 350. The more responsive motor does give the rider a more lightweight feel in motion, but it still weighs the same when you have to steer or stop it.

How does it handle?

I liked the way this bike handled. It actually seemed better balanced than the 250, with both spring rates right on the money. Again, I felt the forks used up a bit much travel, especially under heavy front braking, but that’s an easy fix and certainly no deal breaker. The shock worked sweetly across both tracks we tested it on and gave a predictable ride.

I also like the feel of the chassis. It runs a good combination of stability and agility and is happy to take whatever line is put in front of it. After riding bikes with an alloy frame, you soon notice the different feel of a steel frame and less vibration.

What we would do to improve the bike?

KTM has livened up the motor, so an exhaust would pretty much get that sorted. Most of my time would be looking at ways to reduce weight, although that is usually expensive. Aftermarket starter batteries are said to be lighter than the production KTM one.

I look at this bike two ways. From a pure dirtbike perspective, the 2012 KTM 350SX is a great bike and improved significantly over the 2011 model. There’s better spread of power, a solid chassis and good suspension, which are all the ingredients needed. But my next question is: who in Australia would buy the 350 SX-F?

Well, I would. But how many of me are there out there? Most young gung-ho racers will opt for a 450 because the last thing they want is to be outmuscled by 100cc. In motocross terms that really only leaves Vet racers or play riders and, here in Australia, we just don’t have a lot of them on the ground at the moment. It’s a great bike but just without a natural home at the moment.

I have the same feelings about the 350 in regards to the ergos, brakes and even suspension. I loved the throttle response and the extra 100cc made it strong everywhere in the power curve. I didn’t notice the extra weight at all while riding the bike back to back with the 250SX-F, so the extra 100cc was quite noticeable. Although the suspension wasn’t set up for my weight, the bike felt light and easy to throw around like the 250.