We take Sherco’s new 3.0f and 2.5f to the trails for a tree dodging ride 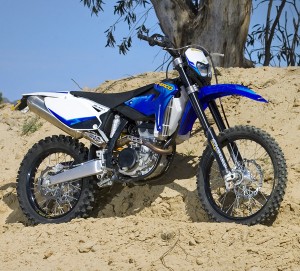 As another range of new and improved models land on the floors of dealers around the country, comes the excitement of ground up revised models, revamped parts and in some cases a new bike released into the market. For 2010, Sherco has taken another step towards mimicking their trials success in the off-road market, releasing a new model to their range. Thus growing the companies off-road motorcycle cluster to six displacements in their ever growing effort.

Last year we tested both the 2.5 and 4.5 machine in our 250cc and 450cc enduro shootouts and the bikes received quite a positive rating. The 2.5 was an easy bike to ride with an almost electric feeling motor, but suffered from a soft suspension set-up, limiting how hard the top guys could push the then black machine. So with a host of updates to the 2.5 and the introduction of the 3.0 we headed to Braidwood in NSW for some tree dodging fun in search of how the Sherco’s stand up to a fun trail ride at the hands of two pro’s and a clubman.

With mainly sandy terrain with the odd rocky section thrown in amongst the whooped out rough trails, the Sherco’s would be well and truly put to the test. After spending some time aboard these bikes, we sat down to nut out the ins and outs of these two Sherco weapons. 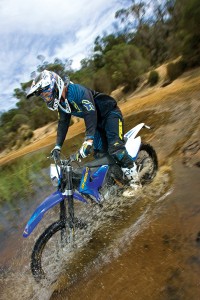 What are they like to ride ergonomics wise? Do they have a quirky trial’s style feel to them?

Ben Grabham – Pro: The ergonomics on the Shercos are definitely getting better. You still know you are hopping on something that is from Europe and that is a little bit different. It isn’t way out or there or anything wired but you can still tell they have their own brand of brakes and clutch and all that sort of thing. Also one thing that I have noticed is that you can tell that they do have a strong trials background. There are a few features when you ride the bike that reminds you of that trials feel.

Shane Booth – Pro: I wouldn’t say they are too quirky. They’ve got quite a light nimble feel to them, but nothing like the feel of riding an actual trials bike that’s for sure. The bars are a fairly high bend and you can notice it when you are seated on the bike, which is sort of a familiarity, but as soon as you are up on the pegs they help you into a comfortable trail riding position. They have a very flat profile along the top of the seat which is pretty common these days and makes it easy to move around on the bike.

Matt Bernard – Clubman: When I first hopped aboard the Sherco, I felt relatively comfortable. Although it is fair to say they do have a more Euro feel to them than some of the bikes out there. To me, the handlebars felt like a fair reach when in the seating position, but ergonomic preferences such as handlebar positioning do come down to personal preference, but to me it did stand out. The seat on the thing is very flat, making it nice and easy to move around on and the gripper seat is a good addition. 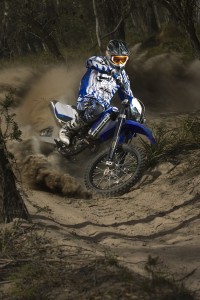 How do they handle?

Ben: Last years bike it had a good strong engine but it was pretty much a let down in the suspension department. That really was the only main thing that let down the last Sherco 2.5, it was a good bike, it just lacked in the handling due to the suspension. This year, it is a big improvement; I feel I can ride it at a decent pace and not feel like I am too close to the edge.

Shane: They worked well on the trails at a trail riding speed, I felt as soon as I pushed any harder than that I started to bottom the suspension fairly easily. This is pretty much to be expected on a trail bike and to the Sherco’s credit even when it did bottom out it didn’t spike or do anything too unsettling. The fork set up allowed the bike to turn well without needing any extra effort and I didn’t find myself chasing the front end at all. The crew at Sherco have done a good job of setting up a bike that would work well for most trailriders out there.

Matt: With the updated suspension on these bikes, I feel it has given the bike a more race orientated feel. Riding the Sherco at the 250 enduro shootout last year, I enjoyed the motor, and felt it to be an easy bike to ride, but when the going got rough, I struggled to keep it on the boil. It actually bucked me off when I tried to push into a rut. No such feelings this time, the bike feels like it stands firmer in its stroke and around the single trail, it handles between the trees without a problem at all for a rider of my ability. 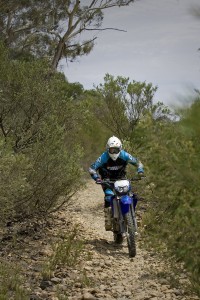 Ben: The 300 is defiantly for someone that is maybe a little bit too heavy on a 250 but doesn’t want too much power. As you can expect, the bike is a little stronger off the bottom and in the mid-range, but they both feel similar on top. Riding in the sand today, the 300 was certainly easier to ride when coming out of corners just to pull a taller gear; you don’t have to work as hard on it. As in handling, you can’t tell the difference, they both feel the same.

Shane: There isn’t massive amounts of difference here, but I liken it to the new 2-stroke 150’s. The 300 just allows a rider to be a little lazier with the clutch because it has that extra torque. The 300 doesn’t feel any heavier than the 250, so for most trail riders they couldn’t go wrong with it. The only reason you’d take the 250 over it would be to qualify for the 250 class in competition. If you aren’t a racer, just riding on the weekends, then the 300 is the pick.

Matt: I guess it’s pretty obvious, but the 3.0 is just a bit more power to make it that bit easier to get through the trail. There isn’t enough to rip your arms out, nor is it unnoticeable, for trailriding, I’d find the 3.0 simply easier to ride. A 450 would wear me out too soon, and I’d be working hard to ride a 250 fast, while the 3.0 is just enough to give you that easy to ride feel. My old man is a 40 something trailrider who loves to have a good go, but really doesn’t ride enough to be riding on the edge aboard a small-bore. For someone like him, I think the 3.0 would be good. 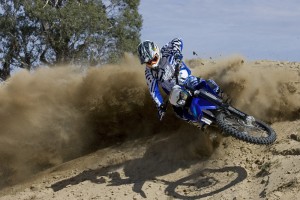 Ben: If you are an over 35 or vets I’d say go the 3.0. But for National Off-road, as you say, you would be up in the E2 against 450s and I don’t think I’d go that way. You’d struggle a little on a fast test. But the 2.5 would be pretty competitive in its class after you strip the excess weight off it and fine-tuned the suspension to suit the rider and the conditions.

Shane: I think it would be a bit of an up hill battle in the pro class. I think the 3.0 would struggle to hang in there especially on a fast test or loop. However, at a clubman level it may just work, it would be easier to hang on to for longer periods than a 450 and you wouldn’t have to be as precise with the throttle.

Matt: At my level, I think I could ride the 3.0 faster for longer. It’s not nearly as much to hang onto as a 450. If it was purely based on the speed of the bike, say a really open Amcross style track, I’d probably steer away from it a little bit and think about a 450 if I would be lining up next to a heard of fire-breathing big-bores.

Do these bikes suit both trailriders and racers alike?

Ben: These bikes still aren’t quite to the level of the Japanese or well know European bikes, but they are getting very close. I thought they were more so for a trail rider last year. But I think this year a club level or intermediate racer could jump on it and race it without wanting to change to much at all and be a pretty comfortable bike to race.

Shane: I have no doubt in my mind they are both great trailriding bikes. Like I mentioned the 300 is a perfect size powerplant for probably 80 per cent of weekend trailriders. When it comes to racing, the 250 is probably a little tame out of the box, but with a little work and some beefed up suspension could be right there. The 300 is a great bike that just doesn’t really have a home as far as racing goes at the moment, but it may just work for a clubman in the E2 class.

Matt: I think so, the new bikes are more race orientated than the previous model. In saying that, a trail rider wouldn’t feel like a fish out of water aboard the bikes. They are both easy bikes to ride, the suspension is firm without being unforgiving and the ergos are set-up to be ridden aggressively, without being so race-orientated that a trailrider couldn’t spend the day in the saddle aboard one.