Yamaha’s XSR 700 claims to be ‘super retro’ but two guys at Yamaha Motor Australia thought it wasn’t retro enough so they, er, fixed it.

The ‘Tenere Retro 655’ you see here is actually a hybrid derived from two other Yamaha models, the XSR 700, for ride and feel, says Yamaha, and the MT-07, for engine and chassis.

The XSR 700 is designed to be easily modified – straight sub-frame, simple guard shape and so on – while components such as the seat, lights and flashers can be swapped without spoiling the symmetry of the parts next to them. That’s the whole idea. Think of it as changing your shirt without making your tie look nerdy. And you get a look that no-one else has.

The XSR and MT-07 are road bikes, the XSR recalling historic Yamahas like the XS650, and of course the naked MT-07 comes in three variants, one of them learner approved. If you’re new to bikes and an MT-07 doesn’t blow your skirt up, nothing will. 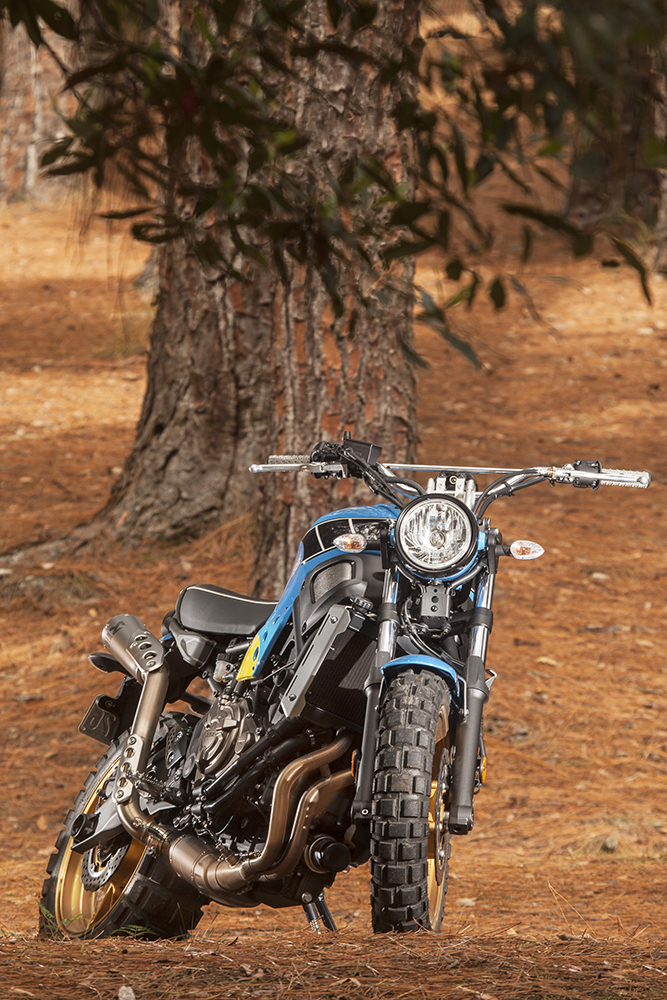 ONE OF A KIND
So, what the boys at Yamaha Motor Australia have done is add a few bits the garden variety XSR700 doesn’t have. But why bother? Well, for starters, the retro thing is popular right now and anything so labelled will get the riding public’s attention. Next up, Yamaha will soon introduce a retro Tenere T7, so swapping bits and ending up with a funky result helps stir interest in the new Tenere. On top of all that, showing what can be done with a new paint job and fat knobbies gets all the Yamahaphobes excited in the idea that a bike doesn’t have to stay the way it looked when they bought it.

What we have here is an XSR700 with humungous Continental TK80 knobbies, along with a bunch of genuine Yamaha accessories like the high-mount Akrapovic exhaust system, the straight seat and a WR450 clutch lever and perch. The bars are vintage MX. The luscious gold paint job on the rims was handled by Ken Gregory at Brazac in South Penrith (Sydney), and graphics supplied by Mark Daniels at Excite Graphics (02 4722 6222). 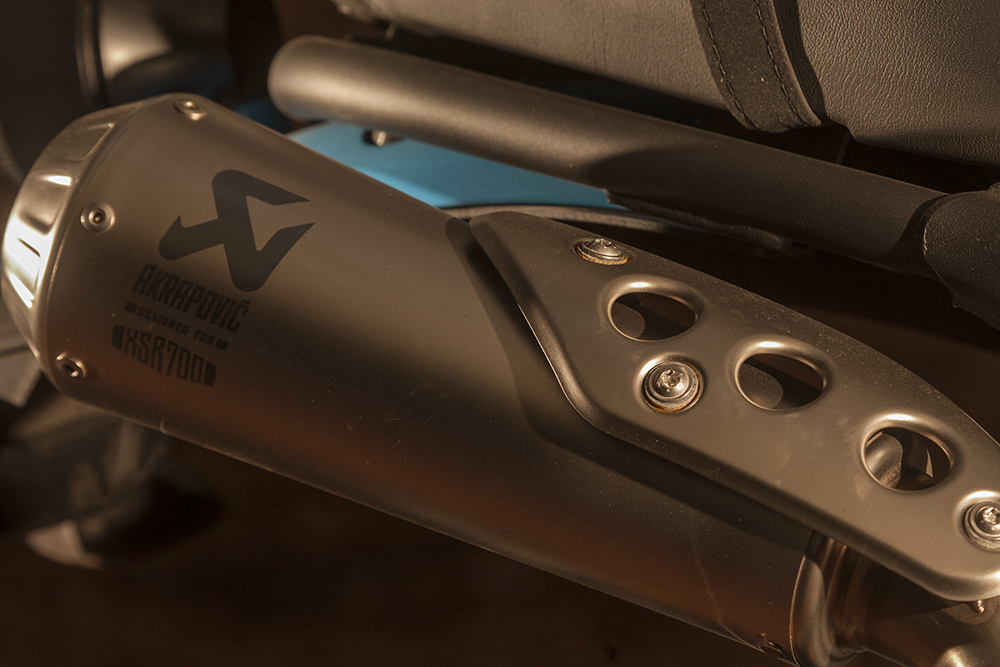 CAN YOU FEEL IT?
I’d like to tell you that one day you’ll be able to buy this as a Yamaha model, but you won’t. Some lucky bastard will get it when Yamaha decides to get rid of it. If Yamaha was selling this jigger for 10 grand and I had 10 grand, I’d buy it.

Still, there is a next-best-thing, and that’s that we rode this beast in the Watagan Mountains and around Newcastle for a week before reluctantly handing it back. The Akrapovic exhaust note makes you want to ride through tunnels all day and, despite the hybrid tag, the bike feels stable and steady on dirt, to a point you might not reach on a gargantuan war machine like Ducati’s 1200cc Multistrada Sherman tank.

The suspension is a little hard for dirt, I’ll admit, and I wouldn’t want to ride Cape York corrugations all day on it, but retro means you’re not expected to. I liked that I could put both feet flat on the ground, that I could slide the Yamaha just enough on pine needles to make me believe I had the talent I’ll never have, and that I gave it back without putting a ding in the Duck Egg Blue.

SCRAMBLED EGG
The scrambler is the granddaddy of the dirtbike. This is where it all began and we love some of the brilliant design concepts coming out of sheds and garages around the world these days. This one just happened to come out of a garage at Yamaha Australia and kudos to them for having the imagination and a bit of fun with it. The bike looks unique and rides well and with some of the best modern scramblers it’s a perfect mix of new and old school.