Whether you’re lining up for a desert race or just a ride with some wide-open sections of terrain, going fast on a dirtbike is fun. It comes with its own challenges, though, so here are some things to consider next time you’re wide open 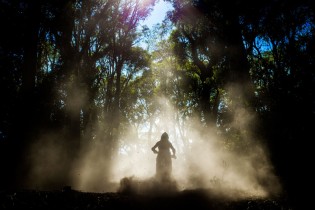 High speeds on a dirtbike are fun but not all that common. Unless you ride desert races, there aren’t too many occasions when you’re flat out on a dirtbike in top gear for long periods. If or when you are, though, there are things you need to think about to stay on the track and safe from a high-speed crash.

This is the first thing you need to adjust when you get up to high speeds. If you’ve never gone 120km/h or more on a dirtbike and you have an opportunity to do it, it takes some getting used to. You need to scan forward and look as far ahead as the track allows to give yourself the maximum time to deal with upcoming terrain. You’ll be surprised at how much longer it takes to slow the bike for something, so the earlier you can see it, the better your chances. Look for anything that may cause you problems and ride on the side of caution when dealing with them. A bump or hole that might not seem like much at 80km/h will be a different animal if you hit it at 140km/h — so look ahead and stay focused on the terrain.

It depends on the surface a little but most of the time you’ll be further back on the bike than usual. Whether you’re standing or sitting, keeping your weight back slightly will lower the impact of obstacles on the front wheel. It’s also important to stay strong on the bike and grip it with your legs. Don’t get complacent at high speed and relax too much; things happen much faster, so you need to stay ready for anything.

Always be aware of the surface you’re riding at high speed. It can make a big difference to what the bike does and, more importantly, how quickly you can slow it down if you need to. If you’re riding at 145km/h, you’re travelling more than 40m every second — two and bit seconds and you’ve gone the length of a football field. The terrain can change a lot in that distance, so make sure you’re keeping an eye on what’s under your wheels.

This is usually where you realise how fast you were actually going. When you need to slow for something, you’ll start to realise quickly that your braking distances are much longer than usual. I know that sounds obvious but it really takes some time to get your head around braking distances from high speeds. It’s different every time you start braking, too — the traction you have can change your braking distance by tens of metres. So practise slowing the bike and get your head around the time and distance it takes before you start pushing the limits. Get your braking point wrong by a metre or two and that can equate to an extra 10 or 20 metres of braking distance. If there’s no runoff where you’re headed, that extra distance can be a big problem. Make sure you’re standing and hold your weight back on the bike to brake. Roll off the throttle progressively so the bike remains more stable. If you just chop the throttle, you’ll send a lot of weight forward and it could end up in a tank slapper. Keep it all smooth.

Sticking on your fresh decals can be a scary task if you’ve never done it before, but never fear — here are some tricks and tips to help you get the job done without going grey. […]

Keep your bike looking good ride after ride with these quick and easy steps. […]

In a perfect world we’d all be able to ride a motocross track using lines the way Mark Webber does in his Red Bull RB7. […]