They can stop you dead in your tracks but if there’s no other option then you gotta dive in and get muddy. 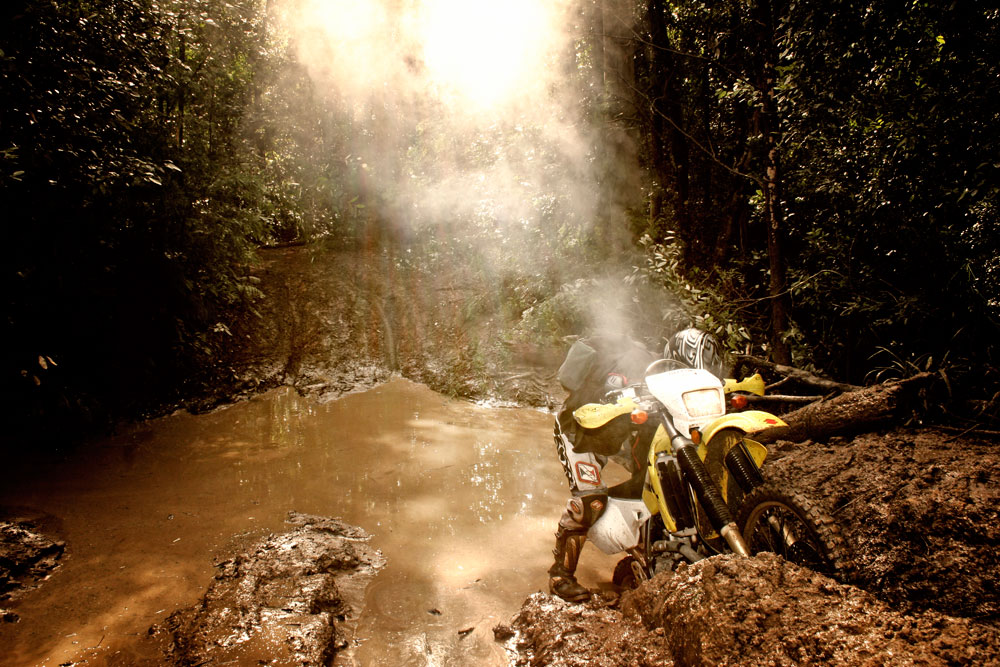 OK, you’ve come up to a mammoth waterhole and it looks deep. The entry and exit look steep and there’s no way around it. So what do you do?

There are three approaches to consider. Banzai your way in pinned to the stop and make a lot of noise and mess. Or creep you way in and putt across like you’re taking Nan for a ride through the botanic gardens. Neither of these methods is ideal; the best approach is somewhere in between.

Rule number one: once you’ve committed to dropping in, do not throttle off at any point. Once you lose momentum, even just a tiny amount, things will get tough.

Remember, what’s underneath the water will look like what you’re sitting on top of at entry, only chopped up and maybe with some nasty debris in there to spice things up. So you’ll know you’re going to ride through clay or sand or straight mud before you drop in. That’ll give you an idea of the amount of traction available. If it’s clay, there’ll be stuff-all traction.

Take a minute to pick your entry and exit lines. Watch other riders go through if you can and take cues from how they end up.

Enter with some care because you can only see the initial drop and not what’s under the water. Once your front wheel hits the solid bottom, feed the throttle on. Don’t be shy, either, because the momentum you build up here may determine how far you get up the next bank. Weight the back so you get as much traction as possible.

In extreme cases, the ruts formed by other riders are so deep they become the only line you can take. As a rule, this isn’t a bad thing but, again, if you don’t have momentum and hit the bank with the power on you’ll never get far.

At this point, it should be said that sometimes you have to get off the bike and manhandle it. Some ruts are so deep it’s impossible to fit your feet on the pegs, so you’ll be forced to push. Again, constant throttle is the key.

Don’t worry about how you look. This ain’t a stylish area. It’s make it however you can and legs out is perfectly acceptable.

If you’re in a position to, help someone else get up as well, because in this sport it’s a matter of if, not when, you’ll need help too.

Your brand-new ride is released from the crate, but is it ready to ride now? No? It needs to be “Wet Up”? […]