In a cluttered market of potential dirt bike haulers, Matt chose the Renault Trafic to put his hard-earned cash down on.

When I chose to step back from DIRT ACTION and have a little break from riding bikes a few years back, I traded in my dual cab ute for the ultimate boys toy – a SS-V Holden ute. It had some fancy bits in the engine, an exhaust loud enough to piss off the neighbours, attract the police and drag on anything larger than a crack in the pavement. Was it great fun? Yes, practical? Like tits on a bull. Back in the DA office and with the bug for bikes, I suddenly needed something more useful. Too many times I was forced to park and ride into tracks and there was no way to hide bikes from the scumbags of the earth – bike thieves. I dealt with it though, until my wife fell pregnant and the For Sale sign went straight onto the ute. 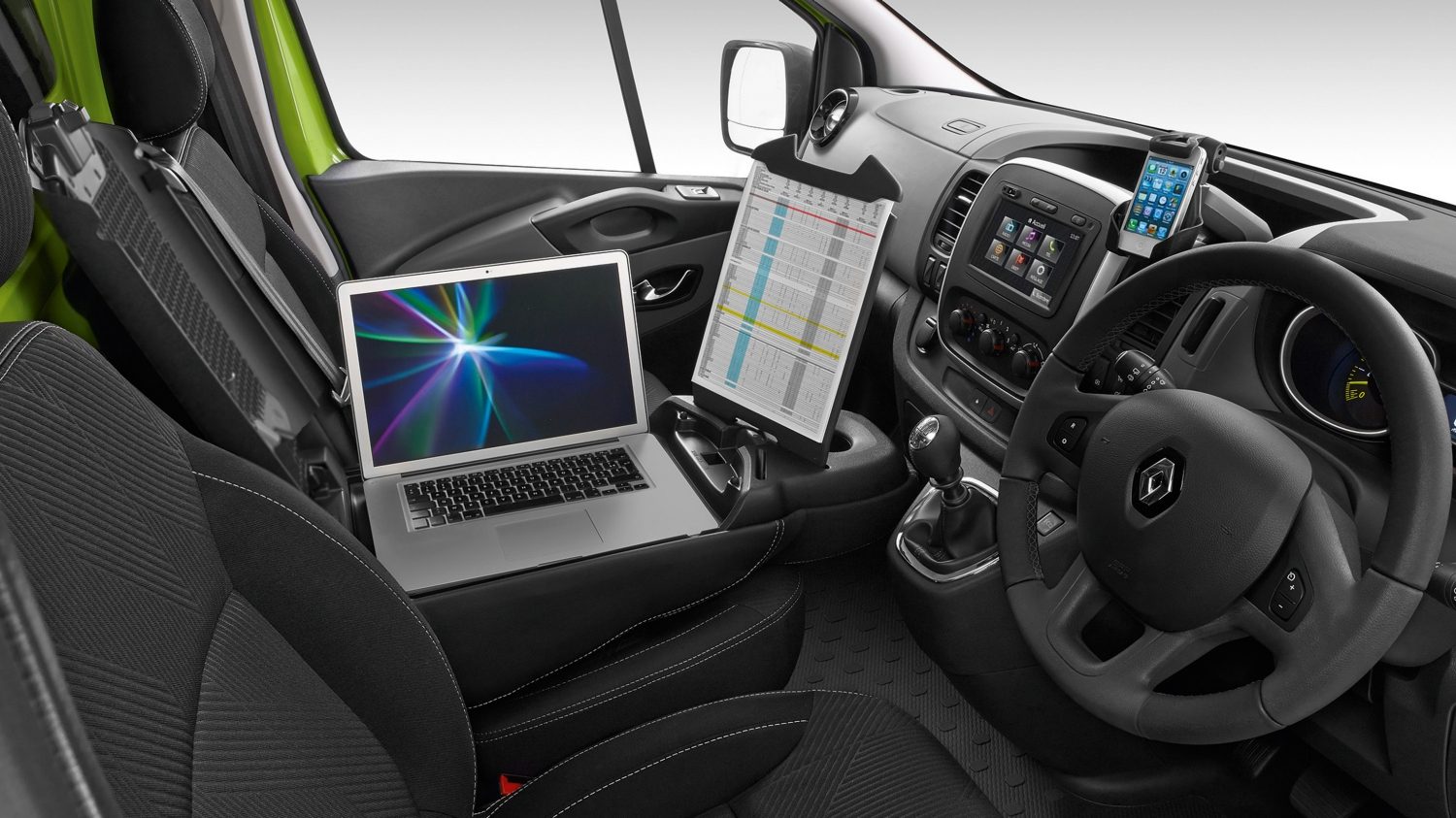 SPOILED FOR CHOICE
I bought my first van 10 years ago, then, there was very little choice and the Toyota HiAce was the choice of most motocross riders around Australia. Nowadays, you are absolutely spoiled for choice. The cost of some vans is astounding though, up to $70,000 for a van… a freakin tin on wheels. I couldn’t justify it. I drove just about every van and on the recommendation of Active 8 Yamaha rider Josh Green I purchased a Renault Trafic from Brian Hilton Renault in Gosford. I went for the long wheel base twin turbo model.
Driving the Trafic you are presented with a spacious cockpit and comfortable drivers position. Firing the van into life and the engine is nice and torquey, when the turbo whistles the van gets moving. There is plenty of power to carry bikes or tow a van. In the front, you’ll find a comfortable steering wheel, a comfortable drivers seat, a two-speaker stereo, two USB points, a great phone holder and a 12V charger.
There were plenty of reasons I went for the Renault Trafic, but the main reason was value for money. I opted for the long wheel base which has the twin turbo engine. It has cruise control, speed limiter (which is awesome for freeways or school zones), Bluetooth audio, hill assist, reverse sensors and camera, 12 month or 30,000km service intervals, four years roadside assist and a three year warranty. I am yet to test the off-road traction control mode, but I have been assured it’s the ducks nuts, which is good to know for those muddy races. The story was that a 4WD ute got bogged, but the Trafic got out, hard to believe and I cant way I want to find out! 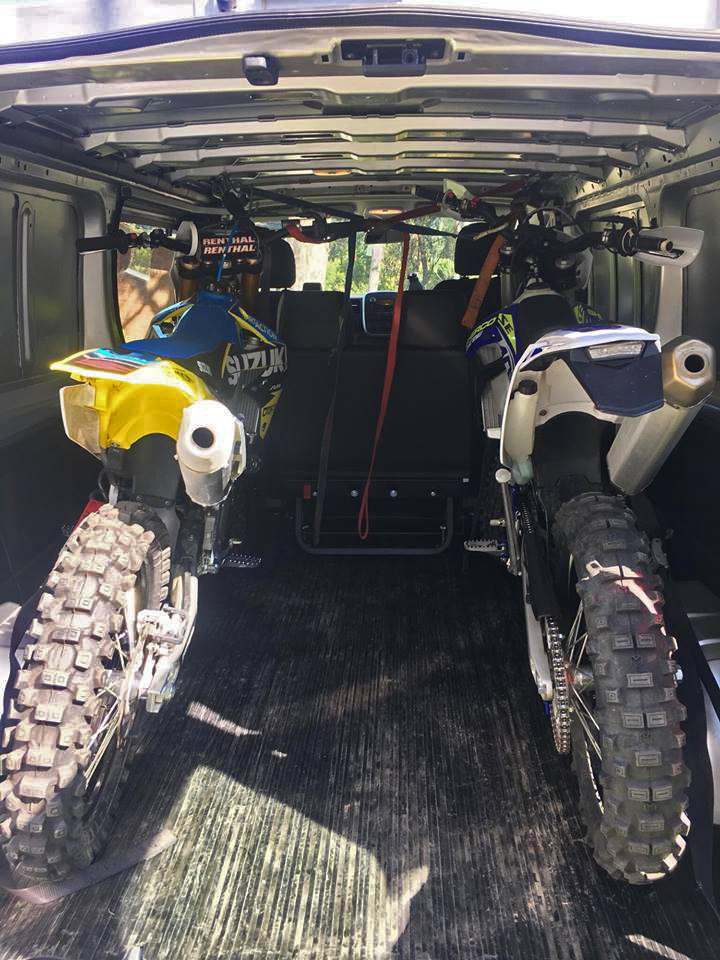 BIKE READY
The Trafic is a great option for carrying motocross bikes. It’s super wide and nice and high – no smashed knuckles on the roof in a Renault! The tailgate needs to be special ordered in a Renault as they come standard with barn doors – I opted for the barn doors. Inside the van, there are a range of tie down locations, 18 tie-down points to be exact! They are threaded into the van and removable, I moved some of them onto the roof of the van to tie my bikes down the way I wanted. Standard, they come with a barrier behind the front row of seating, perfect for keeping the cool aircon in and anything from the rear making its way into the cabin, including the fuel vapors – more on that later. The under seat storage is brilliant and for the tradies amongst us, you can open the door at the rear of the under seat storage and use the extra length for long storage.

SET UP FOR ME
For me, the days of a lowered HiAce with a Zebra print roof and huge sound system are over. I’m travelling to the races with a bike, some fuel, tools, a pram, portacot, child, clothes, toys – the list goes on! So I needed to have a rear seat installed into my van. I was worried about effecting the way that I would be able to use the van with the seat in the rear and still include a bike or hopefully too. I called the team at TechSafe Seating to get their feedback on some potential options for seating in my van. Techsafe offer a huge range of seating options for a range of vehicles, from the budget conscious to the luxurious in single, double and triple. The guys were super knowledgeable and we decided on a double economy seat to suit my budget and needs. Next, the seat needed to be professionally installed, that is where Van Vision came in. Peter and his team worked with me to get the seat located where we thought one bike would work, turned out that with a double seat and some creativity with the tie-down points, we got two bikes and the seat in!
I went away racing to Amcross with all the needed junk, the project Sherco and my daughter safely strapped in her baby seat. Keeping everything strapped down well is paramount having my daughter in the back, and I am going to use a couple of safety chains on the bike, just incase a strap let go. That said, the TechSafe seat has allowed the van to be used as a family weekender, a work van and combining the two as a weekend racer – I love it! I also got VanVision to install a window in the left hand side of the van, great for extra vision and somewhere to look out for my daughter when we are on the long trips. 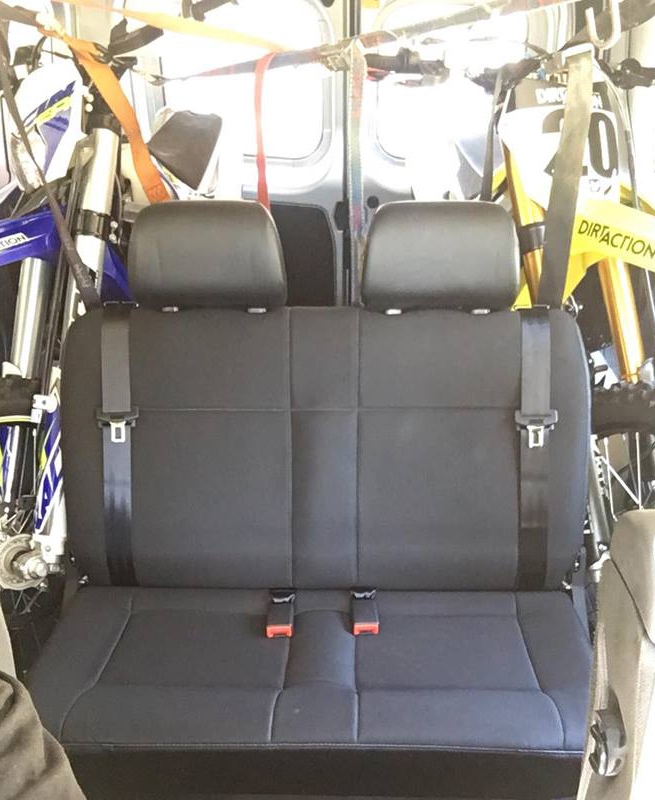 AM I HAPPY?
I have put a few thousand kilometres on the Renault Trafic so far and at this point, I couldn’t be happier. It drives well, is spacious and thanks to the rear seat, super practical for my needs. Overtaking fancy cars in a fully loaded van, uphill never gets old. I got 1250km out of the last 80L tank of diesel, which is bloody impressive and easy on the wallet. I haven’t got a bad thing to say about the van, when it’s empty, it feels like is rocks and rolls a bit, but once it’s loaded it drives much more like a car, nice and planted on the road. If you are in the market for a new van, I highly recommend the Renault Trafic.