WHAT’S ALL THE FUSS ABOUT?

Matt Bernard takes on one of Damien’s favourite bikes to find out why it’s one of his most loved.

I have worked alongside Damo for about six years. In that time, there hasn’t been too much we have disagreed on – with bikes that is, I won’t comment on aliens or music. There are many bikes I have ridden with Damo or on totally different days and both loved, or hated the bike. There’s been one model that always perplexed me.
As we wandered back from a café one morning at DA HQ, me with a coffee, Damo with a Red Bull (again no comment), he dropped a bombshell. “I’m buying a V-strom.”

WHY, WHAT, HOW?
I almost spat my coffee all over him. A V-Strom? As the editor of Dirt Action and sister mag Trailrider, Damo could choose any bike at any time, just about anywhere. Why would he purchase a 650cc adventure bike, which is at first glance is aimed mainly at the road. A BMW, a Ducati, a Triumph? Nope, his heart was set on a Suzuki V-Strom. Now I have nothing against the yellow machines, I’m a huge fan of the RM-Z, RM-X even the DR-Z’s, but to me I couldn’t see the excitement over the V-Strom 650 – come on, at least get the 1000.

I’ve just taken my sweaty gear off and wheeled a Suzuki V-Strom into the garage. I had to find out for myself, why would this particular model float Damo’s boat so much that he would actually purchase one as his personal bike.

They say don’t judge a book by its cover right? 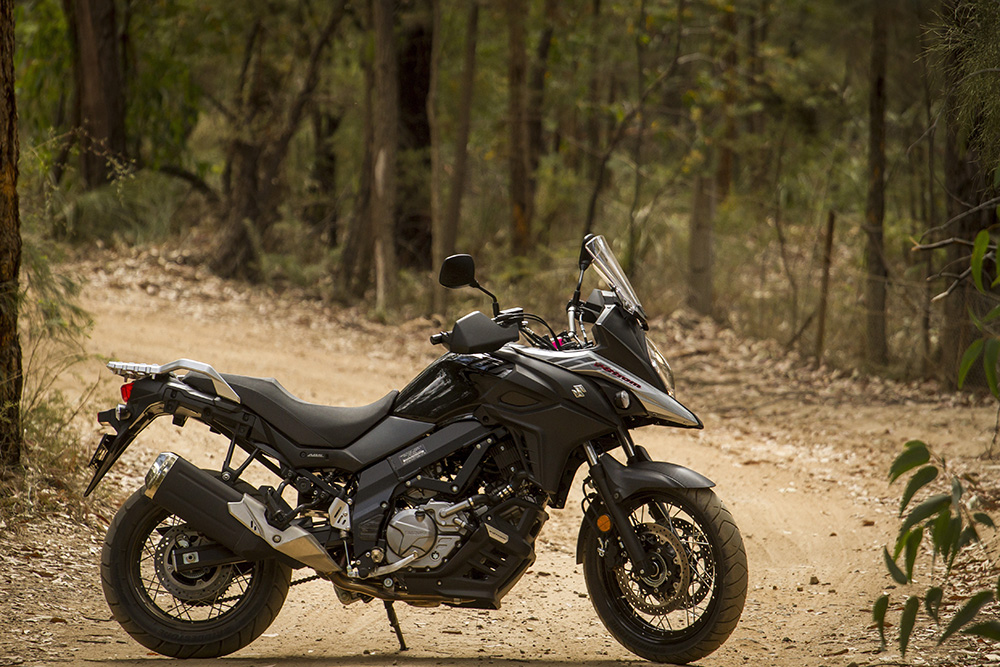 GET UP AND BOOGIE
I picked up the V-Strom and headed up the winding roads towards my house in the Blue Mountains. I have some spectacular roads near my place, but the plan was to rip straight home and get back into some work.  Over an hour later, I had taken the long way home through the winding roads and got off the bike slightly speechless – which doesn’t happen often. This thing is bloody good on the tar… bloody good!
The gear ratio is a nice balance when on the road, it sits on the open road quietly humming along, but shift it back a gear and it’s ready to honk along. It’s a smooth, quiet, yet lively engine. I was impressed, but I’m not one of those martini-sipping road journo’s – I needed to get this thing dirty.
Gearing up to head into the fire trails, I cast my eye over the 650. I was still not convinced this was a dirt-suited vehicle. However, with wraparound hand guards, an engine guard and spoked rims I was starting to feel more optimistic. So off I went, through some winding roads into the bush. As the gumtree-lined path morphed from tar to dirt, I stood up and entered the unknown. Standing up on the V-Strom I instantly could have handled some bar rises and I should have removed the rubber footpeg inserts to give my feet some more grip, but so far so good. Along open fire trails this bike is bloody brilliant! The engine has enough grunt, you can give to it a squirt and crack a slide, then back it off shift up a gear and use the torque to chug through the trees. The suspension handles most of what 90% of adventure riders will put it through with ease – I was blown away. 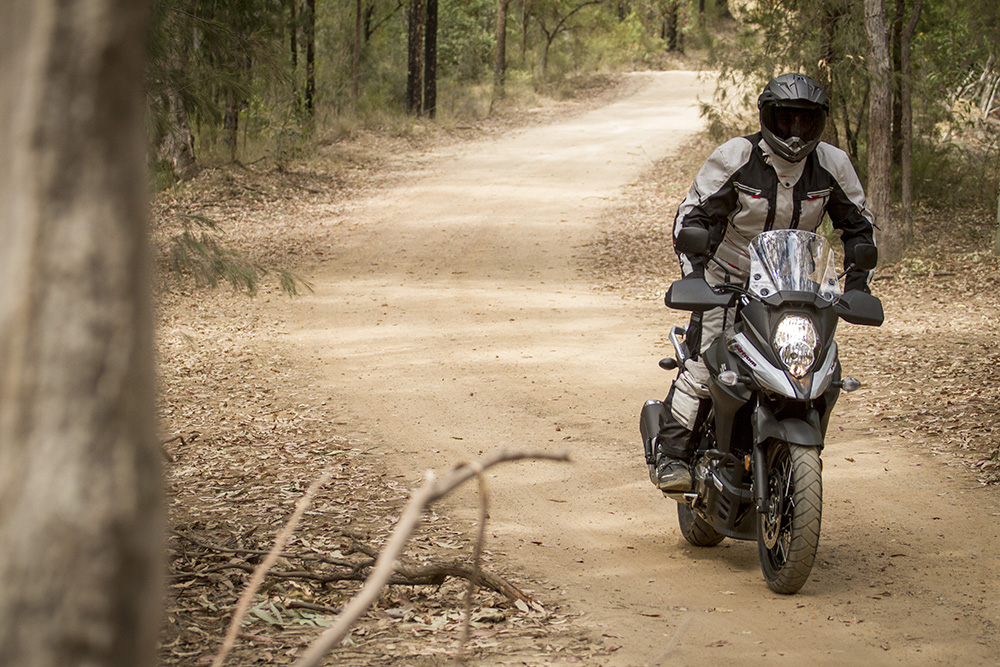 TIGHTEN IT UP
If anyone has seen Damo’s video online, he has taken the Suzuki V-Strom 1000 into some serious terrain. Mud, single trail, hill climbs – hectic shit as far as I am concerned. I thought I would try some tamed down chaos and entered some single trail. I didn’t get all “Romaniacs” on the thing, but some tighter slower speed trails gave me a further appreciation for the V-Strom 650XT. The Suzuki Low RPM assist is quite handy in tighter terrain. The system automatically raises the idle speed when riding at low rpm or when releasing the clutch – also an asset in city traffic.

I played around with traction control being on or off, most of the time I left if off when the terrain was tight, but on the wide open trails I had it on just in case I got a little throttle happy. The ABS was great when stopping from a high speed, but riding the brakes down a few hills I found it difficult to control the bike without being able to lock the rear. It has it’s place on an adventure bike, I’d like to be able to switch it off however. 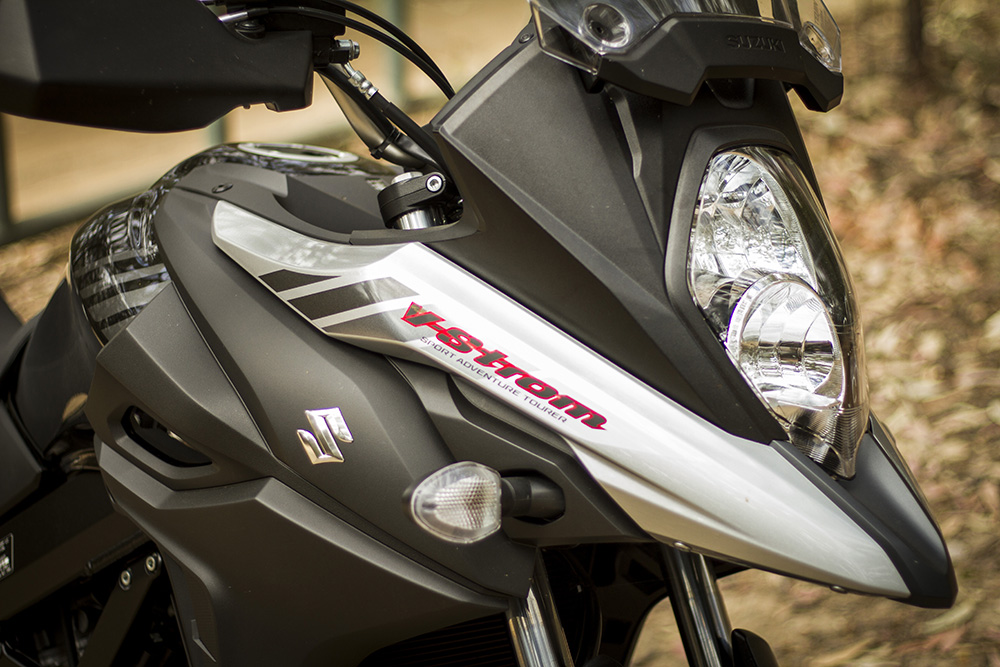 SO, WHAT’S THE DEAL?

Well, I’m sold on this bike. It’s incredible value for money, is great fun on the road and handles dirt well and with some more off-road tyres, extra luggage wracking and some bigger footpegs, you’d have a great off-road ready adventure bike. I understand why Damien bought one of these, and each year they get better and better. The V-Strom is a great bike, it has it’s market and meets the design brief well. You won’t want to go climbing crazy hills on it, nor dropping down rock faces, but for a variety of dirt roads, trails and tar you’ll find the Suzuki V-Strom 650XT an excellent adventure bike.