Sherco drops a 500 on a country that knows the big bore better than anywhere else.

Someone at Sherco has every right to be sitting with a smug smile on their face right now. The Australian’s asked for a 500, the French thought it was pretty weird given they make a perfectly good 450F, but they made one just for us anyway.

We spent two days at the amazing Krusics Ride Park near Sale in Victoria riding a selection of the 2019 Sherco range, but it was the 500 SEF we were most curious about and spent the majority of our time punting around dirtbike paradise on. It was hard to share it and finally peal ourselves of it and give it back in the end.

The 500 SEF we rode was a Factory model and thus comes with an Akrapovic pipe and Kayaba (KYB) suspension, a lithium battery and thermo fan as well as the brilliant Selle Dalla Valle seat cover, Domino grips, Neken bar pad and an impressive graphics scheme that pulls it away from the blue that some confuse for a Yamaha.

The 500 has a larger bore than the 450 (98mm as opposed to 95 which takes it to 478.22cc), and a more robust clutch, but also benefits from the updates bestowed upon the 450 for 2019 that include updated engine mapping, a revised chassis and a new internal balancer.

The sound the big unit makes is distinct from the 450 with a deeper more menacing growl but until the clutch is released the two feel and look identical. Then it all gets stupidly fun.

GO GET SOME
The 500 SER doesn’t bolt off the line in a dust cloud of fury like the 450 does. It manufactures its push via increased torque and it’s immediately clear as you shift up through the gears that Sherco have done a great job at understanding what makes a big bore so great and yet manageable. The delivery is ultra-smooth with no ridiculous spikes and certainly no drops, which makes the power easier to handle from the bottom to mid where most trail work is done, and as you stretch into the high revs it becomes a test of bravery as to how far you’ll keep it wedged in sixth. Thank the moto-Gods for Brembo brakes.

It’s so deeply satisfying to push it into the mid-range and let it rev, steering with the back wheel while the front remains firmly planted. And while it has the response and control to be ridden in with more finesse in single trail, that’s not really what it’s about and the faster steering 450 is a better option. The 500 SEF is a pure weapon of dominance over an open trail where stability at blistering paces is needed.

There can be absolutely no doubt that Sherco have nailed the combination of chassis and suspension on the Factory models which carry Kayaba fork and shock. The effect this has on the enjoyment of not just this bike but the entire model range can’t be undersold, but here with gobs of power on tap and mind-blowing open trails abound, the combination works so damn well. We didn’t touch a single clicker over two days though it is worth noting that the KYB kit is sensitive to tuning in a way the WP can’t touch at the moment so the range of adjustment is greater and the chances of you finding best feel is increased.

Sherco’s Racing models come with a much softer WP set-up and I can’t see that working as well in on the 500 – there’s just too much going on and that engine needs to be complimented by a handling package that won’t shy away from big hits and fast-paced trail work. While we didn’t have a Racing model on hand I’m pretty confident in saying that the Factory 500 will be the superior for anyone at an intermediate level and above.

Our first impressions of the 500 were, ‘holy shit that’s good,’ – our last impressions were exactly the same. We had to be told to stop riding or we wouldn’t make our flights. 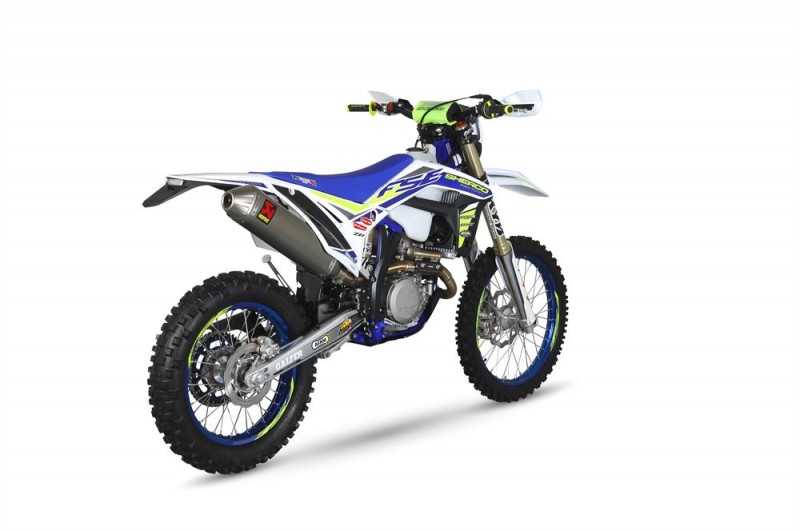 AUSSIE AUSSIE AUSSIE
It’s worth repeating here that the 500 is just for Australia. As with the rest of the Sherco range it will be available as a Racing or a Factory model (Racing $13,990 – Racing $15,990), but the French made this bike for us alone and damn it if that doesn’t make you want to neck a croissant right now then I don’t know what will.

Sherco are responding to the fact that we love 500s and a glance at the sales for 2018 at the time of writing shows the 500 EXC sitting in third on the enduro listing which it never realty strays too far from. Yeah we love our big bikes here in the wide brown land and there’s been one dominant model for a long, long time. Many have come and gone (rest in peace Gas Gas, Husaberg, proper Husqvarna), but few have managed a sustained attack on the supremacy of the great Kato. It may be time to call a heavyweight cage fight though…the Sherco is that good.

After racing a Sherco Racing 450 all year in Amcross, Matt got his hands on the bike that seems made for max speed.

After a year of racing on the 450, I was itching to ride the Sherco 500 SEF Factory, not only for the increase in power, but the inclusion of the Kayaba suspension had me excited. Firing it up it’s obvious the extra grunt that the 500 possesses. It’s got a deep and throaty exhaust note thanks to the Akropovic pulsing out the back. The bike doesn’t feel as heavy as the scales suggest. Riding a high gear and torqueing through the single trail we had on offer was great fun, but the real excitement happens as you open the beast up. Holy shit. This bike is epic. On the wide open ‘chicken run’ loop at Krusic’s Ride Park I was in heaven. After some light rain, the sandy gravel fire roads were built for top gear slides. Damo and I could have ridden this loop all day, clicking gears and losing our minds at how good the 500 is on open trails. For me, the most important part of riding the 500 was on the thumper track, something like what I raced all year at Amcross, but a little sandier. The 500 just ate it up. By carrying a higher gear and using the torque the bike smashes loam and punches it’s way around a track like this. As you click a gear, this fire-breather has a little exhaust crackle, it sounds epic and makes it that little easier to click gears under load. Being that there is so much power, it’s essential that the suspension handles the big hits with ease. If it goes wrong in fourth gear on a 500, it’s going very wrong. Happy to report the KYB suspension ate it up. It’s plush in the initial part of the stroke to handle the small bumps but has the bottoming resistance to withstand the large whoops as the track gets deep. For the extra money, I would definitely opt for the Factory model when it comes to racing. The KYB suspension is built to handle racing conditions and it does it with ease. I have basically nothing negative to say about this bike. It’s that good. It really is.