Jason Anderson and the Rockstar Energy Husqvarna Racing Team have created history in Las Vegas, capturing Husqvarna’s first 450 AMA Supercross Championship since the brands inception 115 years ago. The premier class title marked Jason Anderson’s first championship in his fourth season as a 450 rider. The 25-year-old grabbed the red plate at round two with a win and never looked back, outlasting the deeply stacked and talented field.

A successful collaboration between the Rockstar Energy Husqvarna Factory Racing team and the Husqvarna Motorcycles engineers, gave birth to the FC 450 Rockstar Edition. Inspired by their dedication to perform at the highest level, this successful collaboration is the foundation that achieved the brand’s first-ever premier Supercross title. In a sport of absolutes that requires exceptional courage, meticulous preparation and unwavering determination, Jason Anderson and the Rockstar Energy Husqvarna Factory Racing team paved the way to this historic milestone. 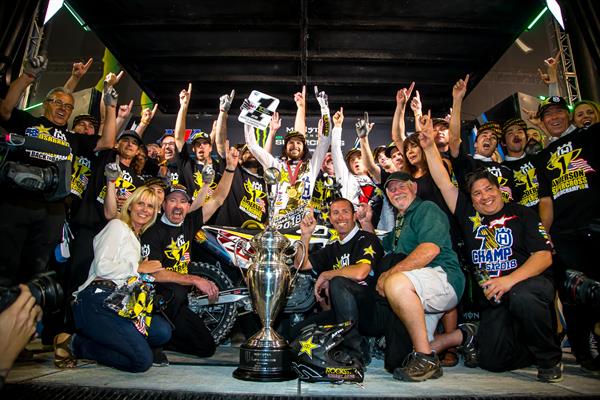 With a monumental championship on the line, Anderson took on a conservative approach to the final round. Qualifying third, the newly-crowned 450SX Champion got off to a top-three start in his heat, where he settled into second early on. He maintained his second-place transfer position for the remainder of the heat race, shifting his focus toward the Main Event. Anderson got a top-ten start in the Main Event but he quickly established himself in the fifth-place position early on. He maintained a solid pace for the remainder of the 21-lap Main Event to finish fifth overall on the way to claim his first-ever 450SX title.

“Today was really stressful, but I feel like I handled it really well and came out with the championship,” Anderson said. “I’m so excited. We put our whole lives into this, we’ve been riding dirtbikes for so long and to win this championship, me and my team, it’s the most surreal moment of my life up to this point.”

Teammate Zach Osborne also made history as he successfully defended his title and claimed his second-consecutive 250SX East Championship aboard his Husqvarna FC 250. 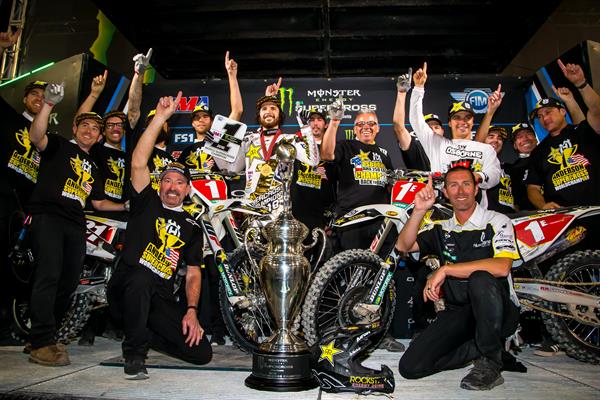 “This year has been tough for me. I’ve had to fight every inch for this championship,” Osborne said. “Jordon and the rest of the guys rode really awesome this whole season and gave me a heck of a challenge. This was the hardest one so far, I would say, but it’s amazing to be a three-time champion.”

This achievement also comes as a career-first for Team Manager, Bobby Hewitt, who since taking the team from a privateer effort to a full factory program has successfully managed to collect several historical accolades, and continues to lead the team on a pioneering journey forward. Hewitt’s belief in Anderson’s talent from a very young age ultimately led to his career with Husqvarna, which extends another four years.

“This is what we’ve worked for,” Hewitt said. “It’s definitely a milestone – for us, for Husqvarna, for Rockstar, for all the staff – everybody. No one realizes how much work goes into it and to be able to bring home two championships – one in each class; very few are able to do that. I’m proud of the staff, I’m proud of the riders, I’m proud of everybody. I couldn’t be happier right now.”