Travis Pastrana is a household name. TP had a successful racing career and hung up his boots in search of a career in Freestyle Motocross, this formed into the start of the Nitro Circus Movies. Those DVDs launched Travis into lounge rooms around the world. These very movies grew into the Nitro Circus Live Tour, the most impressive action sports show in the world. Travis’ tour again heads down under in 2018 and we caught up with the ringmaster himself.

How does the feeling of rolling out in front of tens of thousands of fans at a Nitro Circus show compare to the feeling of an AMA Supercross?
Similar but opposite at the same time. Supercross is like the movie “gladiator” in the beginning. Your only goal is survival. Pretend the crowd isn’t there and win the event. Now it’s like gladiator after he’s told “win the crowd and you’ll win your freedom” haha. Its about working with everyone to give the best possible show rather then your individual performance. For instance, me doing the biggest whip I’ve ever done and crashing then not being able to do a big trick at the end of the show.. even if I landed the biggest whip of my life it wouldn’t be nearly as good as some of the other guys so it’s important that they push themselves in that segment and I save myself to take chances somewhere else.

Do you miss racing motocross and supercross?
Racing will always be in my blood but I enjoy freestyle much more these days. 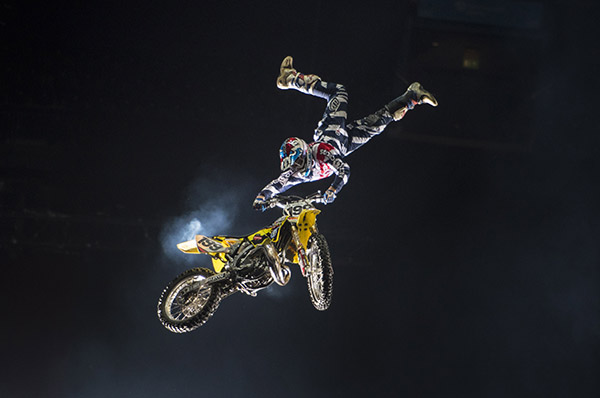 If you could pick one single moment in your extreme sports career, and define it as your greatest moment – what would it be?
I don’t think I could. Winning my first supercross at daytona or my first outdoor national championship at steel city were both amazing. Representing my country in the mxon and winning in France against the French team that was favored to win that year was amazing. Landing a double back flip on live tv when everyone thought it was impossible and they were about to watch me die was pretty cool.. so was beating my hero and rally legend Colin McRae at the x games rally and qualifying pole at talladega. But probably the thing I’m most proud of is that I still get to ride for a living at 34 years old and I can travel the world with my family and friends.

The Nitro World Games introduced some newly designed ramps which allowed some new and exciting freestyle motocross tricks – is this the next stage of evolution of freestyle motocross?
FMX used to evolve daily. The jumps were built by dirt and every year they got bigger and steeper and crazier.. then ramps took over the fmx landscape and everything became standardised.. it’s time to go back to being creative and to continue to push ourselves.

Have you ridden an electric bike yet? Alta motors are doing some pretty special things.
Never ridden one.. hell, I still ride a 2003 RM 250cc 2-stroke! 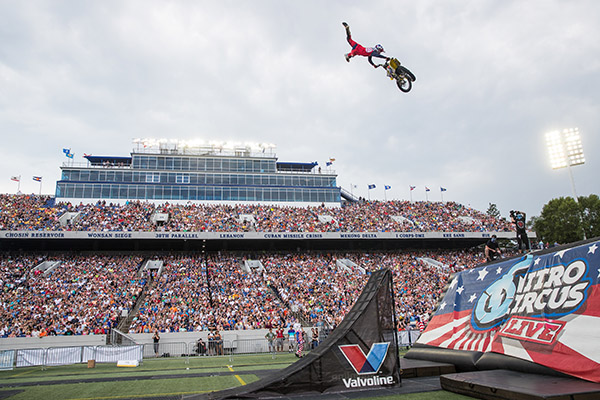 You are constantly asked by mainstream media about your injuries, but what advice can you offer to up and coming motocross racers who are returning from injury. How do you overcome the mental battles of injury?
I get asked that a lot, but I’ve never really had any mental battles. I love riding my bike more then I mind being hurt. I have respect for the dangers of the sport and all of the nitro circus crew are very calculated, but if you second guess yourself you are going to get hurt again. Hesitation makes your worst fears come true, my best advice for anyone is, that if you aren’t willing to accept the fact that you will crash and you will break bones if you continue riding, then it might not be your sport. I know I will break more bones in the future but I work hard every day to be in good shape and limit my risks.

Let’s talk Nitro Circus Next Level Tour – what new and exciting things can fans expect at their next show?
The second half will blow your mind. This is the first time we’ve brought out ramps so big that we can’t do any indoor shows or we would hit the roof.