I never need much encouragement to attend the AMTRA High Country Ride (HCR). What’s not to love? A great club with a long history that boasts a headquarters with facilities few can match. Then there’s the location; the Victorian alps. It’s no secret that most of Australia is flat as John Denver’s ECG, but the Victorian high country isn’t named as such because it’s a top source for the devil’s lettuce (pot). If it’s hills and mountains and valleys and epic scenery you want, this is where you find it and the High Country Ride, which this year was once again heartily supported by Suzuki Australia, rarely disappoints.

Touted as an adventure ride, the HCR is somewhat different to many other trailrides as it’s short on single trail but long on overall ride time. It’s not technically difficult but you won’t leave thinking you’ve been sold short. 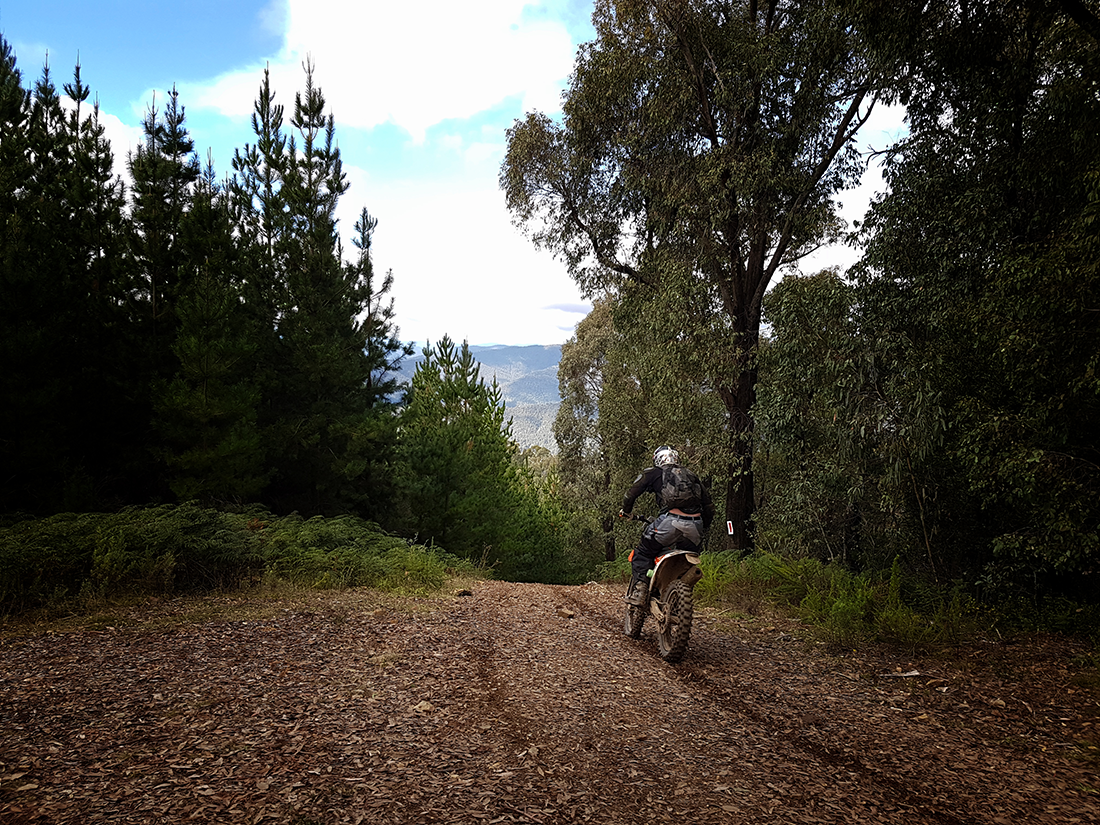 My weekend of riding wasn’t entirely what I had hoped, despite everything being laid out on front of me. I’d literally driven directly from the KTM Adventure R launch and hauled our project 500EXC-F down to Victoria to get stuck into my 11th HCR. The ride was celebrating its 20th year and there’s been an Ashenhurst, be that me or my dad, at nearly every one. My old man has had some pretty epic crashes that I get told about a lot. He did a shitload of riding so it’s unavoidable but in my 11 HCRs I’ve never crashed hard nor got a flat tyre which is a fair achievement. Having said that, now let me tell you how that all changed this time around.

I avoid the dreaded and otherwise frequent flats by running 15 to 16psi in my tyres. That’s a stupid pressure I know but again, 11 years and no flats on a ride that claims victims as regular as Kim Jong Un combs his hair. I hate changing flats but I also have to carry a load of camera gear so stocking up on tubes and tools ain’t easy.

So what we’ve established here is that I hit the trails pumped-up like Schwarzenegger’s biceps and also on a set of old FIM tyres that had less bite on the earth than a chocolate crackle. These factors will come back around shortly. 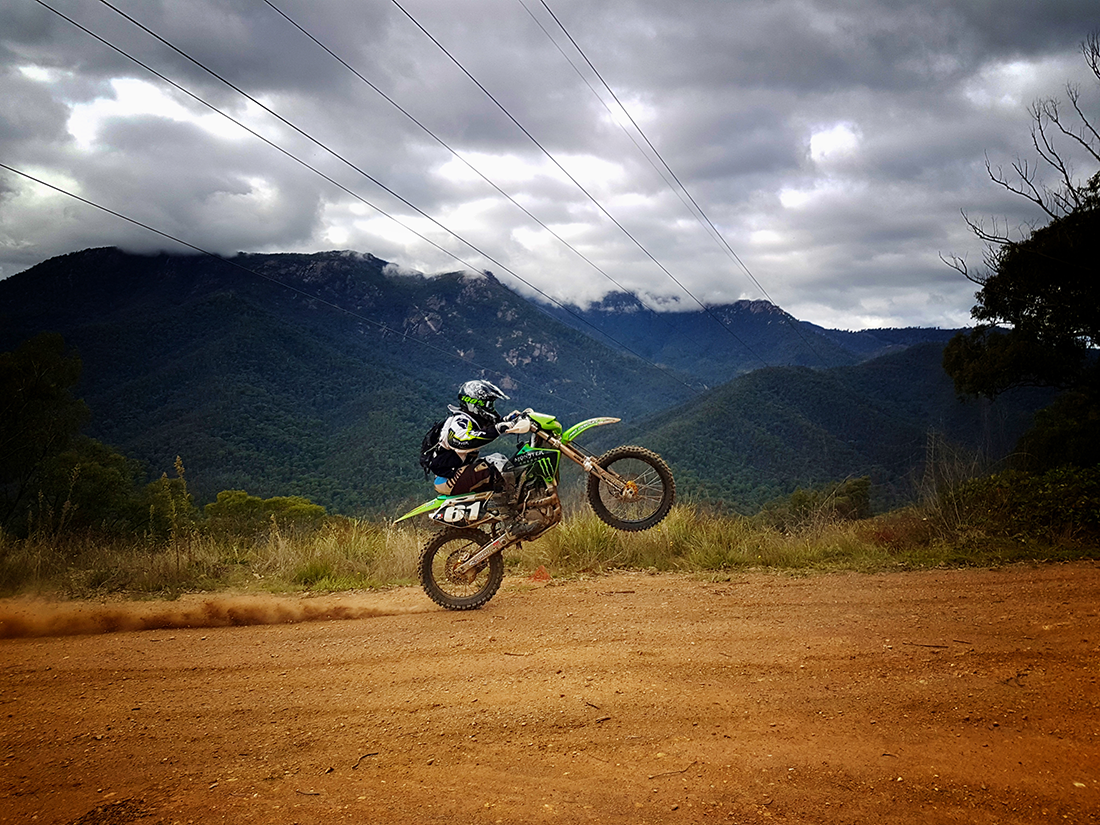 The two-day ride pulled about 250 riders on the Saturday and most camped the night on the AMTRA headquarters site, which includes a bar, toilets and hot showers. Food is included with the entry and everyone gets served up some top grub. The mix of bikes is one of the most eclectic you’ll see on any trailride due in part to the ability to run rec-rego in Victoria, so it’s not unusual to come across an RM250. There was a heap of YZ250s, I saw a new CRF540R and really, if you have the fuel capacity to get around the course (there is a fuel stop included), then you can ride whatever you like. When you go to a motocross event it’s almost impossible to find a bike older than say, two or three years. But here you were on the track with old ‘Bergs, Huskys and XRs. Beaten up Katos and flogged Yammies were everywhere and one RM250 in particular turned plenty of heads. It was also evident this year that Husqvarna has had a big few years as there were more of the new white knights than ever. So pull-up on a shiny new machine or an old shitter – it doesn’t matter, just get out and ride. I even saw one bloke wearing a life jacket from a boat as armour. The concept seemed fair enough.

Instead of pulling into a single trail straight away like we have the last few years, the ride kicked off with a fast and flowing section that set the tone for the rest of the day. I wasn’t a huge fan of last year’s route but this year the guys did a great job. Recent rain had the trails in prime condition with pretty much zero dust and the temperature was in the ideal zone for riding. 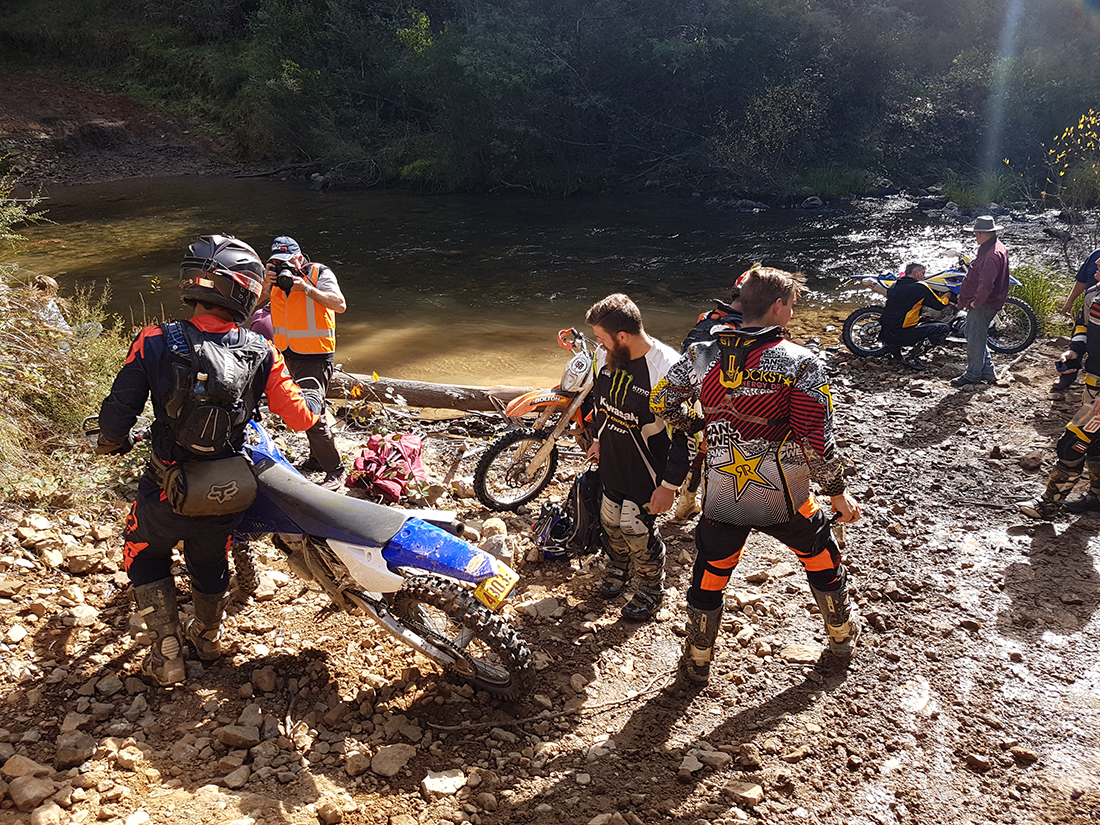 About 20 minutes before the lunch stop we hit a section that hadn’t seen the sun and it was slippery as snot if a can of WD40 could produce a load of snot. Knowing I was running high pressures and shit tyres I kind of backed it down a bit and with the 500 that’s not too hard to do. It can keep up the pace at low revs like no other bike so I was managing the situation till we cleared the section.

And then I was looking at some big ants. Really big ants. They seemed agitated. “Are you Ok mate,” came a voice that seemed to be attached to the hand in front of my face. I’d been riding down a slippery hill, not too steep but chockers with rocks, when in an instant and without warning the front-end bid farewell and I hit the ground with my head and continued down the trail without my bike with momentum and gravity doing their bit to make sure the whole thing lasted as long as possible. You know those crashes when you actually have time to think, “This is taking a long time, I wonder where I’ll end up?” So I did a lengthy run on my head and arms over the sharp rocks at speed, and when it was done I wasn’t sure if the sparkles in my eyes was because not so long ago I was thinking about Sofia Vergara (I often am), or that I had sustained some mild brain damage.

I was due a big one and I knew it. It had been too long and here it was to claim its pound of flesh. Fair enough – that’s the game we play. My bell was well rung though. I’m glad I had my M2R on because I hit rock and continued to bounce of it with my head, shoulders and arms till gravity gave up. The blokes that stopped to help me on my feet and the bike back on its wheels were legends and after a bit of a breather I was back on my way.

My camera gear was banged up which brings me to another point. My digital camera died early in the ride. Just stopped working after years of loyal service which is why most of the photos in this feature come from my phone. I guess when you’re having one of those days right? 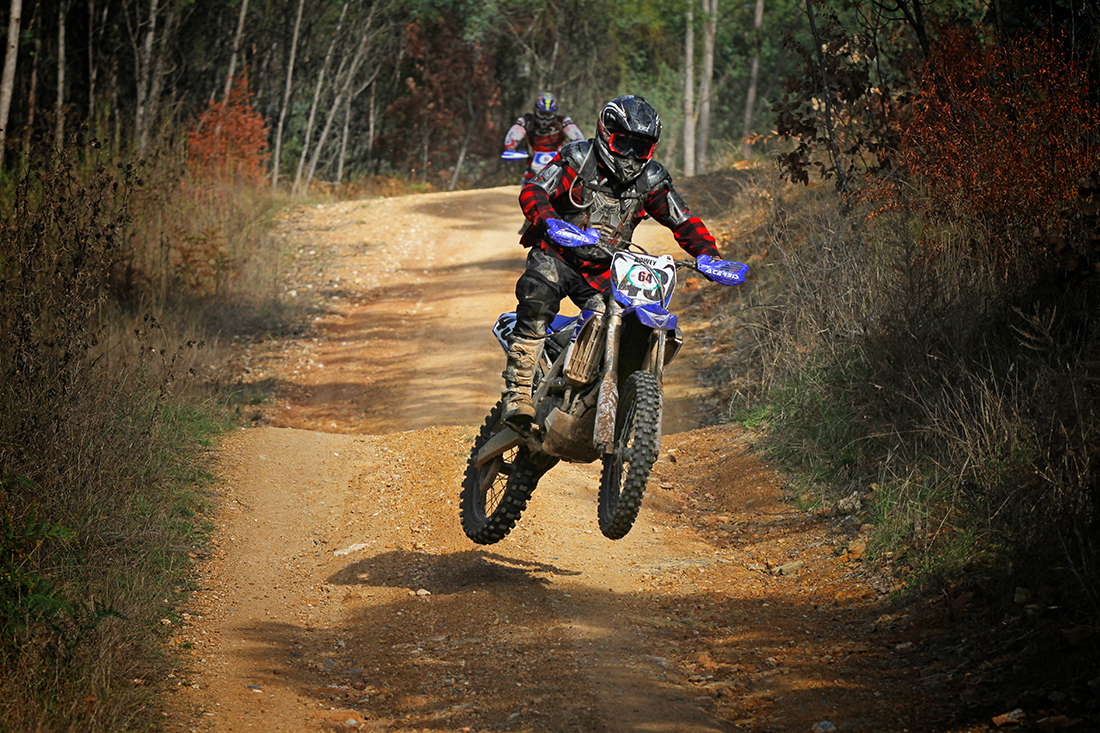 So I carry on at a sedate pace while I wait for my brain to reboot. It’s a nice landscape so I you need to stop or you can slow down enough to take it in the scenery is breathtaking. As I started a steep downhill run I felt a scurrying in my ear. Evidently a critter had got into my helmet and now it was exploring. I shook my head and tried to stick my finger in there but riding one-handed down this hill was tricky. Then another bug appeared in my goggles. It could have been the same one; I never asked its name so it’s hard to tell. This little shitter then jumped straight onto my eyeball at the very split second I blinked and I caught it under my eyelid. I expressed my feelings using lots and lots of loud Fs and Cs and tried to keep it together till I reached the bottom of the bloody hill. I’m scared of two things only – clowns and things coming towards my eyes. I can’t even watch someone take eye drops so this is one of my worst nightmares. I came upon a big drainage hump and managed to pull the bike up, rip my goggles off and proceed to rip into my eye looking for what was now a smattering of bug mush. I’m sure sound carries a long way in those majestic valleys and anyone within earshot would have learned just how effectively an Ashenhurst with a bit of Scottish blood mixed in can swear at length and at volume.

By the time I set off again my wrist and elbow had ballooned-up and started to seize and my left eye was watering like Don Burke but I was pissed off now and given I’d come back around to a section with better traction, set off on the 500 to somewhat redeem the day. As I said before the trails this year were brilliant. Fast, flowing, interesting and above all, fun.

You can stop time and time again to take in the amazing views and by the time you get to the welcome lunch stop there are already stories flying around of near misses, mates taking the piss and a few blokes looking a bit tired and happy for the rest.

After lunch we hit a couple of quality water crossings, the last of which was the deepest of the ride and took many scalps. In fact when I arrived there I couldn’t cross because the other side was jammed with bikes being dewatered. Of course once I crossed I hung around on the other side with a heap of blokes just there to watch the carnage.

From there it was just a few more kays to the end and while I was starting to hurt pretty good I was still pumped on how good the trails were. 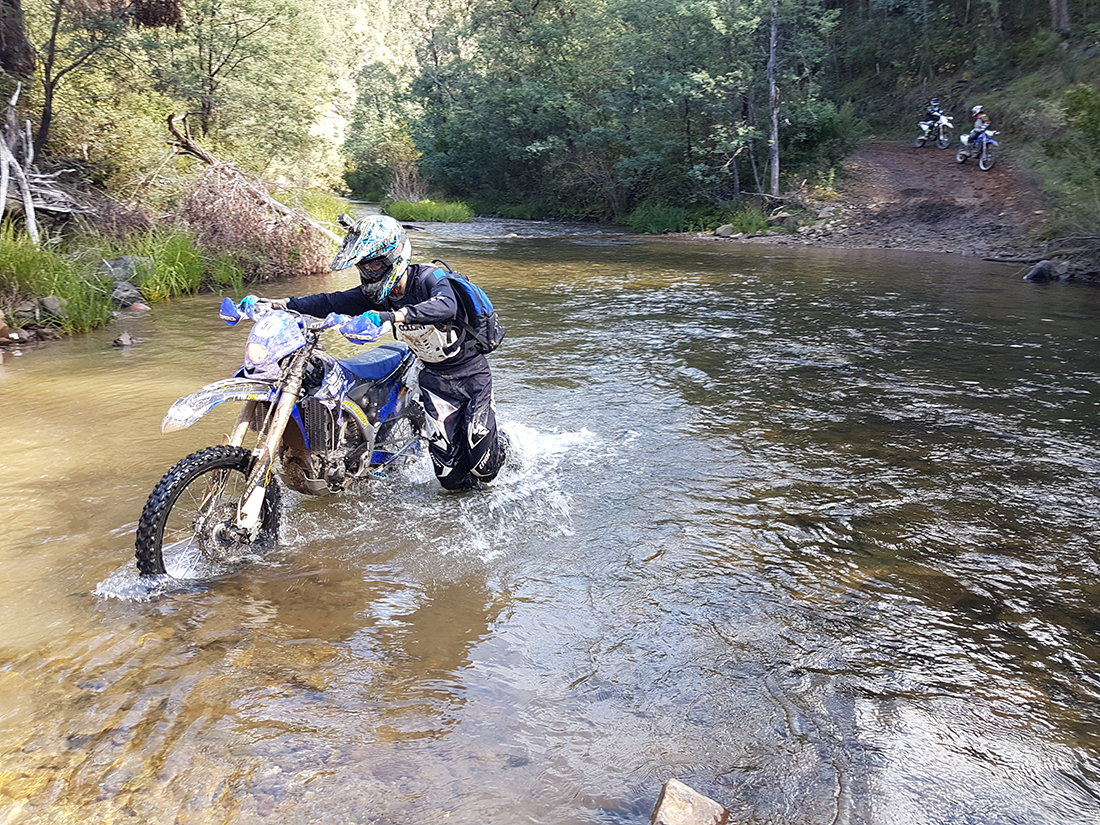 So that night I had a couple of JDs and decided to see how I felt in the morning before making a decision to ride the Sunday which was only about 85 kilometres. I woke up to a left arm that didn’t move, a crazy headache and overall I felt like I’d been pulled out of the wreckage of a shuttle disaster. I pulled the plug on the Sunday which hurts given I’d driven nine hours to get there and in 11 tears I’ve never missed a single section of AMTRA trails. But you gotta know when you’re beaten and when you’re ride by yourself especially after a big head-knock, things can go upside-down too easily.

Back at the AMTRA headquarters there was plenty going on with the major raffle prize of a Suzuki V-Strom 650 XT being handed out along with a heap more amazing prizes. The ride really does focus on the adventure and the enjoyment of the weekend. The guys do everything they can to make it the best and the most welcoming. It’s a hike for a lot of people to get to Abbeyards in the Buffalo Valley but after 20 years the club has it dialled and the only bummer now is that I have to wait another 12 months to get another crack at it.