The Motul MX2 Championship all came down to the final moto at Coolum on the Sunshine Coast today, with Davey Motorsport’s KTM rider Egan Mastin finally securing the 2017 championship at Round 10 of the Motul MX Nationals.

With only three points the difference in the Motul MX2 Championship heading into the grand finale at Coolum today, spectators were treated to the tightest racing of the season, with DPH Motorsport’s Wilson Todd and Mastin going head to head for the final time this year.

With the class heading straight into qualifying this morning, riders were treated to a freshly prepped and watered track for their 20-minute timed session. After each rider had set their fastest times it was Western Australia’s sand specialist Kyle Webster (Penrite CRF Honda Racing) who was quickest on track setting a 1:45.681 lap time that couldn’t be matched. Second fastest was DPH Motorsport’s Todd (1:45.912), and third was New Zealander Hamish Harwood (1:46.605).

Unfortunately for Davey Motorsport’s Egan Mastin, despite initially qualifying in third, the KTM rider was relegated 25 positions due to an on track incident during free practice on Saturday. As a result, Mastin took 28th gate pick when racing commenced later this morning. 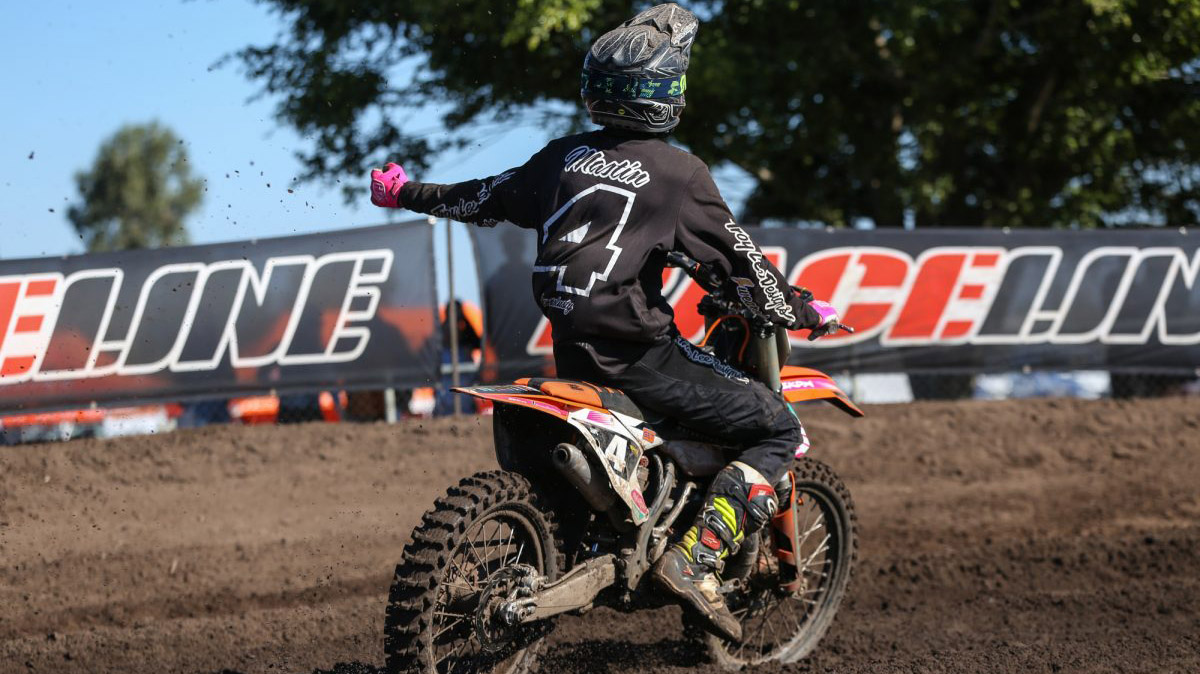 With the Motul MX2 championship well and truly up for the taking this weekend, when bikes headed to the line for moto one, there was tension in the air.

When gates dropped it was the Isaac Ferguson who took the Raceline holeshot, but after only a lap it was Hayden Mellross in the lead, and no surprise to see the number four KTM two-stroke rider Mastin firmly in second position.

Two riders who were well outside of the top three after one lap on track was red plate holder Todd and and Serco Yamaha’s Mitchell Evans were both well and truly in contention for the MX2 championship – the pair back in seventh and 11thposition.

By the time riders headed into lap three Mastin had made the move on Mellross, taking control of the race, while behind the KTM leader, Mellross and fastest qualifier Webster were locked into a battle for second.

After six laps, Todd closed in on teammate Mellross and after only a handful of turns the DPH Motorsport’s Yamaha rider moved into the final podium position behind Mastin and Webster, ensuring that the MX2 championship did not slip away from him without a fight.

By the halfway point in race one Mastin continued to lead from Webster and Todd, while behind the lead trio was Mellross, Serco Yamaha’s Evans and Raceline Pirelli KTM’s Jay Wilson.

With ten minutes remaining, Mastin looked untouchable out in front, continuing to lead by a comfortable margin with only a third of the moto left to run.

By lap 13, Serco Yamaha’s Evans who was sitting third in the standings began to make his way through the pack and up onto the rear wheel of Mellross in fourth, he too attempting to secure as many championship points as possible before this year’s champion is crowned. And it turned out luck was on Evans’ side – only a lap later Mellross was forced to DNF due to a mechanical issue.

By the time riders received the last lap board, it was clear the despite every effort from Webster and Todd that Mastin could not be caught, and when the chequered flag flew on race one it was Davey Motorsport’s Mastin who collected the first race win at Coolum.

After race one, Mastin became the new MX2 Championship points leader, however with Todd only two markers behind him, moto two was set to be the decider!

It all came down to the final race at Coolum this afternoon for this year’s Motul MX2 Champ to be crowned, and with thousands of spectators watching on, the 250cc category put on one final performance for 2017.

With only 20 minutes on the clock in race two, a start was more important than ever in the for the MX2 class, and when gates dropped for the last time it was DPH Motorsport’s Todd who claimed the final Raceline holeshot.

On only the first lap spectators were treated to the battle they had been waiting for. Mastin soon closed in on the Yamaha leader’s rear wheel, setting up the final moto as the most epic race of the season.

Behind the lead two was Todd’s teammate Mellross, followed by KSF Racing Team’s Wills and Raceline Pirelli KTM’s Wilson in fourth and fifth.

By lap two Mastin had closed in on Todd’s rear tyre, the pair switching lines and give 110% in their bid to secure the final championship points of the season. But despite Mastin doing everything in his power to close in on the DPH Motorsport’s pilot, the Davey Motorsport’s rider could not make a move stick.

By the halfway mark, Todd continued to lead from Mastin, Mellross and Webster who had found his way up to fourth. Evans remained comfortable in fifth place, followed by Wills and Wilson.

But it was the battle between Todd and Mastin the no one could take their eyes off, and by lap 11 the leaders were in to lapped traffic.

Unfortunately for Todd it was on lap six that everything changed – a small mistake which saw the Yamaha rider go down proved costly, and just like that, Todd relinquished the lead and handed the top spot to Mastin.

Behind the top two things were changing too. Webster soon made his presence known, passing Mellross and moving up into the final podium position.

Despite only seconds now separating Mastin from Todd, it was the DPH Motorsport’s rider who had his work cut out for him if he was to chase down the KTM leader and claim the 2017 championship in moto two.

With two and a half minutes remaining, Todd was doing everything in his power to close in on race leader Mastin, but with KTM rider holding more than a nine second lead it was looking more and more likely that the championship would be Mastin’s.

And when bikes crossed the finish line for the final time this afternoon, it was the number four Davey Motorsport’s machine which claimed the final race victory and the 2017 Motul MX2 Championship. Second in race two went to Todd, followed by Webster, Mellross, and Evans who completed the top five. Sixth in race two went to Jayden Rykers, followed by Wilson, Connor Tierney, Wills and Hugh McKay who completed the top ten.

With the results from both motos combined, Mastin’s 1,1 results saw him claim the round win at Coolum, from Todd and Honda mounted Webster.

But it was the championship that riders celebrated once racing wrapped up today – Davey Motorsport’s KTM rider Mastin finally crowned the 2017 Motul MX2 Champion. Second n the championship podium went to DPH Motorsport’s Todd, while Serco Yamaha’s Evans secured third in his rookie year in the 250cc class.

“My dad has been behind me 110% this year through the good and the bad. At one stage we didn’t know if we were going to have a ride this year but KTM stepped up and I can’t thank those guys enough for giving me the opportunity.

“We made our weaknesses our strong points this season, and I can’t thank the guys and my mentors enough who have been in my corner.

“Also the Davey Motorsport’s crew. Those guys work so hard, they’re an awesome group of people who put so much effort in, so to give them this back, it’s exactly what I wanted to do.

“The 250 two-stroke it’s an awesome bike and it’s the first time KTM have actually won a championship in this class, so it’s awesome to have done it today.”

For more information on the 2017 Motul MX Nationals, head to www.mxnationals.com.au