CRF250 Rally is clearly a bike inspired by the mighty CRF450 Rally we’ve seen taking on the like of the Dakar. Based on the dependable CRF250L, the Rally takes the fledgling 250 adventure bike concept further than anyone else has straight from the manufacturer. Yamaha Australia has been building its WR250R into an adventure bike for a few years now with great success, but only in small numbers and it’s not an official Yamaha build. So Honda is ahead of the curve here and it hasn’t gone unnoticed by us that the new CRF450RX (tested in this issue), has followed on from the Africa Twin and now this and all that represents the biggest moves in offroad for the company in far too many years. It’s good to have you back guys and let’s take a minute to give praise where its due; the Africa Twin is brilliant, the RX is damn good and the CRF250 Rally? Well let’s see how it rates.

From the CRF250L base, Honda clearly ran with the rally styling and the quality of the plastics is excellent. The graphics are stick-on and not sublimated but it’s not overly complicated although a solid fall will see parts of the bodywork cracked or broken.

The non-adjustable windscreen is a small unit that offers reasonable protection. We’ve been finding a lot of riders have been turning towards the smaller screens as also seen on KTM’s 1090 Adventure R and while I personally prefer a slightly taller unit I found this one to be pretty solid at deflecting the freezing winds of this crazy winter. Behind the screen you’ll find a good looking digital instrument panel that’s offers all the relevant information you need from revs, to speed, trip, time and the of course the high beam, blinkers and engine warning light. There is no gear indicator and I know some guys get pretty attached to those but on a smaller bike it’s really not necessary. Just under the speedo there’s a button for engaging/disengaging the ABS and that’s it. Not a lot to distract, not a lot to fiddle with and really not much else needed.

The bike arrives with decent handguards, good footpegs and a bashplate and all-up I reckon it’s an impressive package. But again, the whole idea of riding a 250 adventure bike is something I’ve avoided for a while now. I see no reason for them to exist. So you can farkle the bike up all you want and I’ll appreciate the look but I’m a big boy and I want my big bikes. 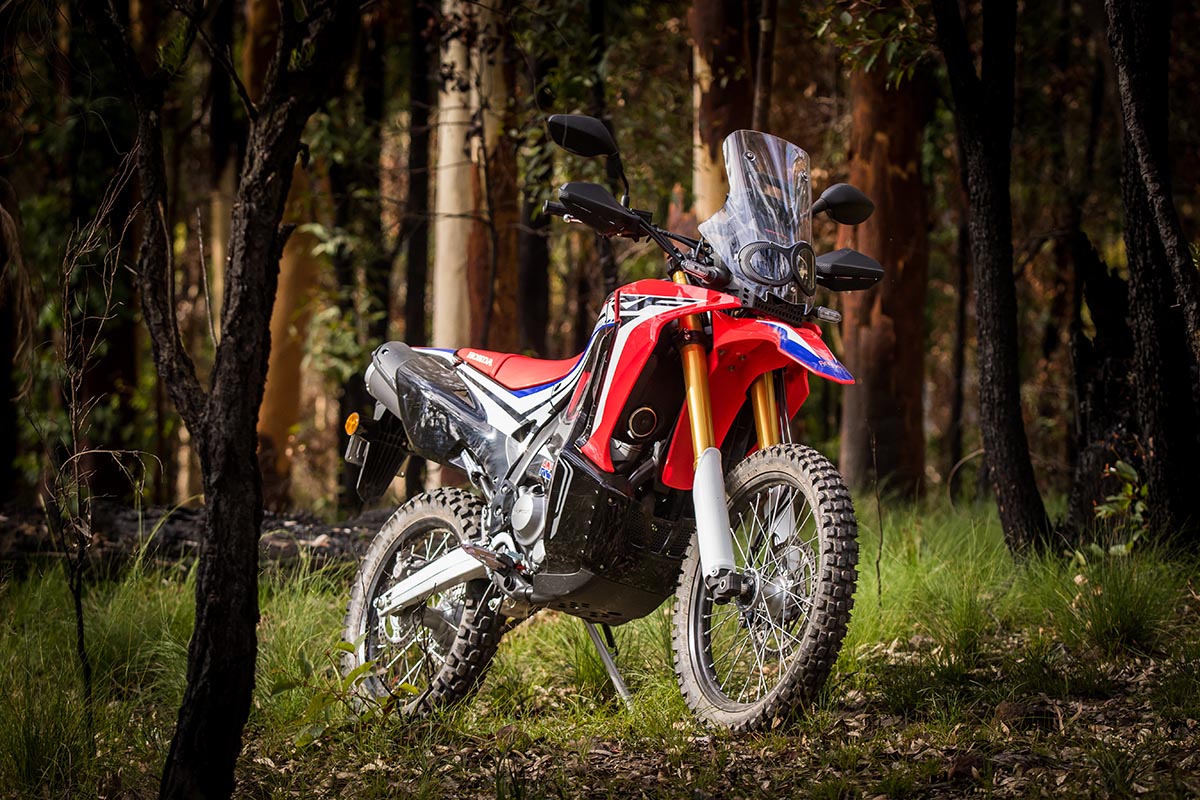 THE PARTS AND FARKLES
The Rally runs a reasonably soft seat which I’m a fan of that tapers nicely at the tank and is fairly wide and flat further back. Seats are a big deal on a bike that wants you to spend hours and days on it and this is one is a good thing. The seat height is a claimed 895mm which is 20mm more than the 250L, but the ground clearance is increased 15mm over the 250L to a decent 270mm.

The bodywork is for the most part unobtrusive but your knees do rest up against a large panel which I doubt would result in anything less than scuffed up plastics, but it didn’t impede or disrupt the feel of the bike for me. On a larger bike this is where you’d usually contact the tank and in comparison this is a better grip point but again, the plastics will suffer for it.

The switch blocks are all the standard fair with nothing there that controls or adjusts anything corresponding to the digital display so you don’t have to practice finger gymnastics to make changes mid-ride.

The Rally is e-start only and the fuel injected engine is fed by a 10.1 litre tank (the L runs a 7.9 litre tank), so the range should be pretty solid. The bike is quiet on start-up but not disappointingly pathetic. This shouldn’t even be an issue but until the electric bikes take over I still like an engine to sound decent but not too loud.

We did a stretch of road on our initial ride to get to the endless tracks and trails nearby and my initial impression of the Honda was that it was incredibly light and quick to react to any movement of the ‘bars. There was some adjustment to the power output which when I’m in ‘adventure mode’ usually means feeling something from around the 1000cc mark and I had to remind myself that while this looks bigger via the bodywork it is a 250F so it isn’t going to bolt. 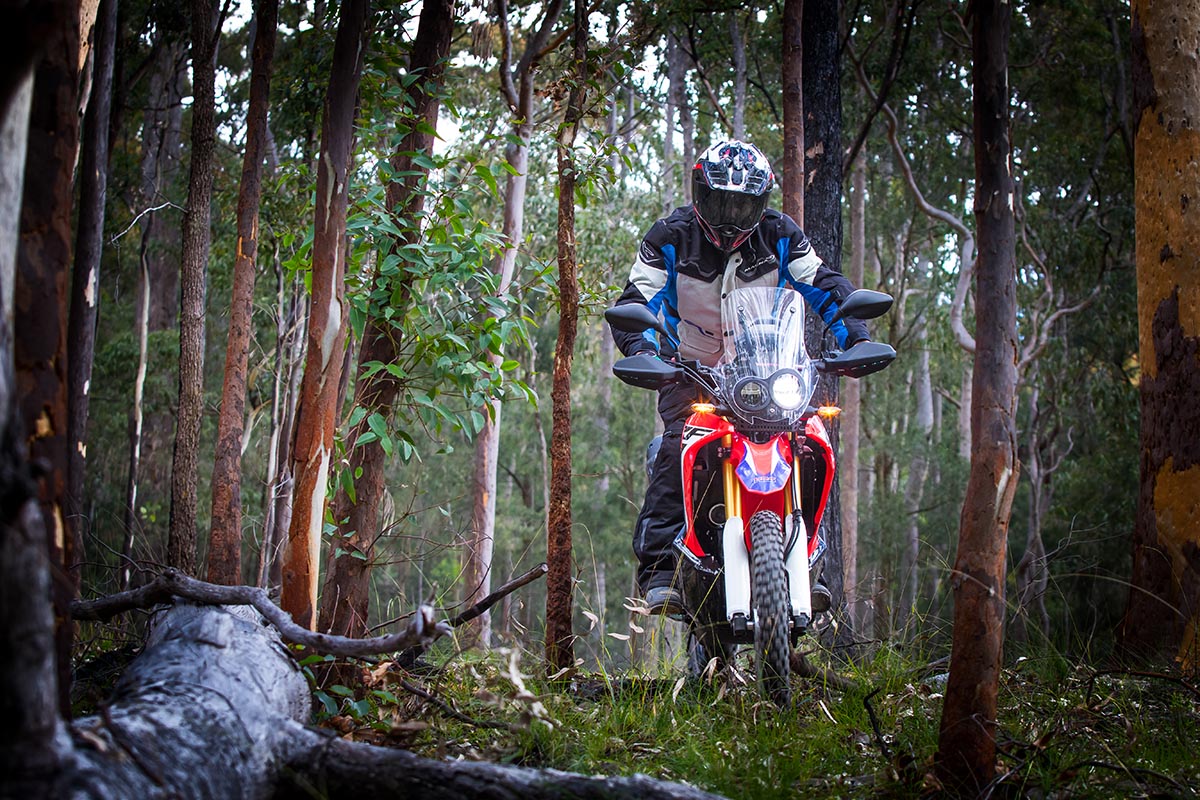 We reached the dirt soon enough and this is where I wanted the bike to prove itself. So far I have to admit I liked most everything about it but this is where I’d spend 80 per cent of my time if I owned one.

The first section of trail had a lot of drainage humps and I found quickly that the revised suspension, though more robust than the 250L, will bottom-out if you get airborne. My disappointment was allayed when I remembered that the same sections of track produced the same result on almost all the adventure bikes I’ve take through there. Almost all the big guys bottom-out too.

I think the most surprising aspect of the bike was the power and while it took me a little bit to get used to the milder output I found I wasn’t really screaming for more away from the road. The Rally can get up to and keep a good pace going with little effort. It’s also interesting that the overall pace on the rougher trails was faster than most bigger bikes but not all that different on the open tracks. The 0-100 was a lot different but not the average pace. Yes an Africa Twin will eat it alive but it’s not that easy to ride say an R 1200 GS much faster than I could the Rally.

In the tighter stuff the Rally obviously excelled and it showed itself to be a stable, comfortable and nimble bike. The shock pogo’d a bit at times and a little set-up is needed to get the best from both ends but it’s a good start point. I didn’t ride with a good load though as I would on a proper adventure ride and while that would settle the back but you’d no doubt pay for it when the engine has the extra effort to give but less to offer than its bigger counterparts.

The Nissen brakes are excellent with a 296mm disc fitted up front as opposed to the 256 on the 250L. I ran with the ABS switched off which disengages the rear but leaves the front active and found the Nissen’s to be strong with a decent if not a little vague feel through the levers. The clutch is refreshingly light and you do go to it a bit on climbs but it’s up to the task and I do like the stock long Honda levers. Honda have done the little things well with luggage mounts fitted as stock parts and really the only things we’d look at replacing with any urgency would be the pipe to find a little extra aggression and a good set of handguards as the stockers are pretty flimsy. 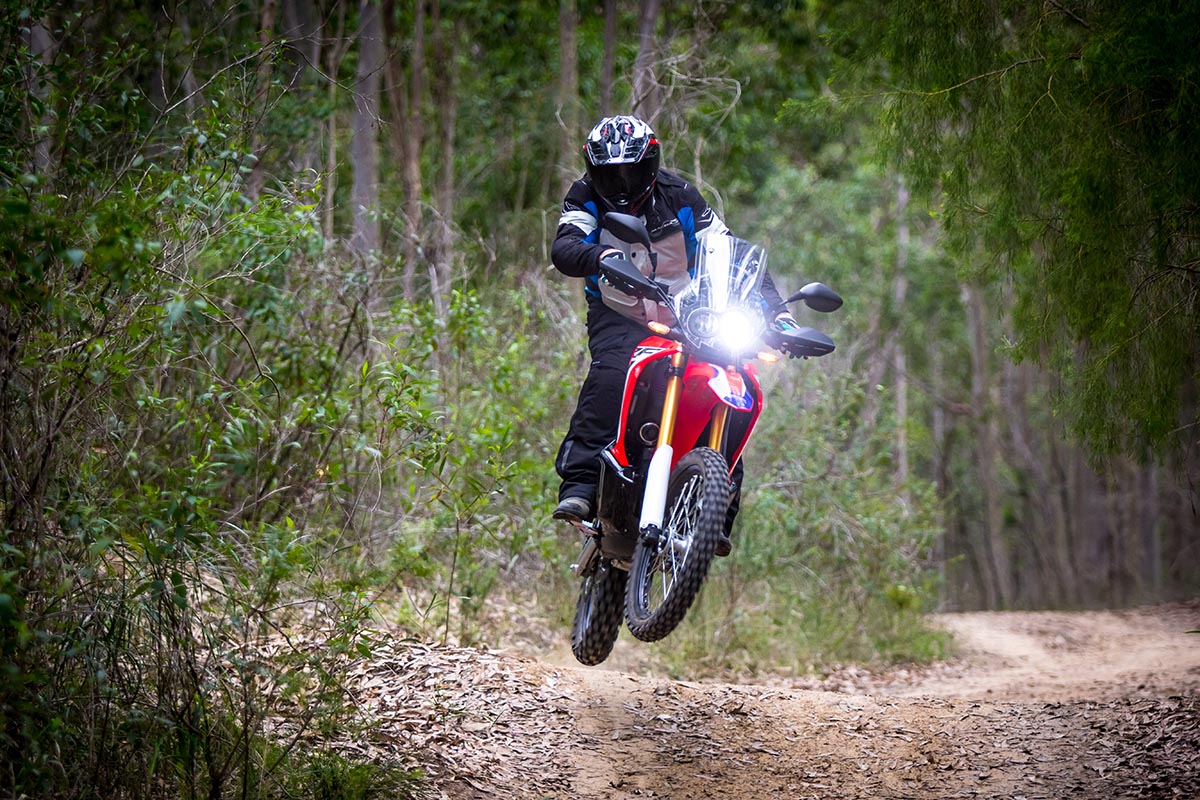 This bike was a surprise for me. Part of me didn’t even want to like it – my monkey brain that craves horsepower was screaming at first but had all but disappeared by the end of our time. The Rally proved itself to me and to my father who got off the bike and said, “Honda should sell a squillion of these things.”

On the face of it, it’s a well-made bike. It’s based of the dependable L model but has upgraded in many of the right places such as better front brake and 50mm more travel in the 43mm Showa fork and 25mm more in the Pro-Link shock. It’s a good looking bike that I imagine will be bought largely by riders in urban to inner-city environments, struck by the rally styling and enticed by the comfort and fuel economy. It’d be a great bike to zip through traffic on and it’ll carry a load to and from work with no fuss. And for most of those reasons it works as an adventure bike as well. It works where a 1000cc bike scares someone off. It works where you have less than $10,000 as the bike comes in at an RRP of $7,299. Yamaha’s WR250R is around the same price ride-away but with much less fuel capacity. In many other specs these two go toe-to-toe but if you’re an HRC fan you can’t go past the presentation of the Rally and by the time you’ve added a just the larger tank and windscreen and proper digital readout to a WR250R then you’ve blown well passed the price of a CRF250 Rally. As a side note, Kawasaki has a fuel injected version of the engine that’s in the KLX250 which I’m told is a ripper but at this point will only be found in a road bike.

Ultimately I’d love to see a factory 450 build. The full HRC Rally regalia but with 450cc. The old X engine isn’t a bad starting point for that project but for the purposes of building an adventure bike that’s lighter and cheaper than the big dogs but still offers plenty of mumbo the 450-500cc point is just about perfect. I’m also keen to ride the Kawasaki Versys 300 which might be more road than dirt on the face of it but it’d be interesting to see what that extra 50cc offers.