Baggett is the third different overall winner in the 450 Class this year.

It seems that every week of the Lucas Oil Pro Motocross Championship brings a new twist. 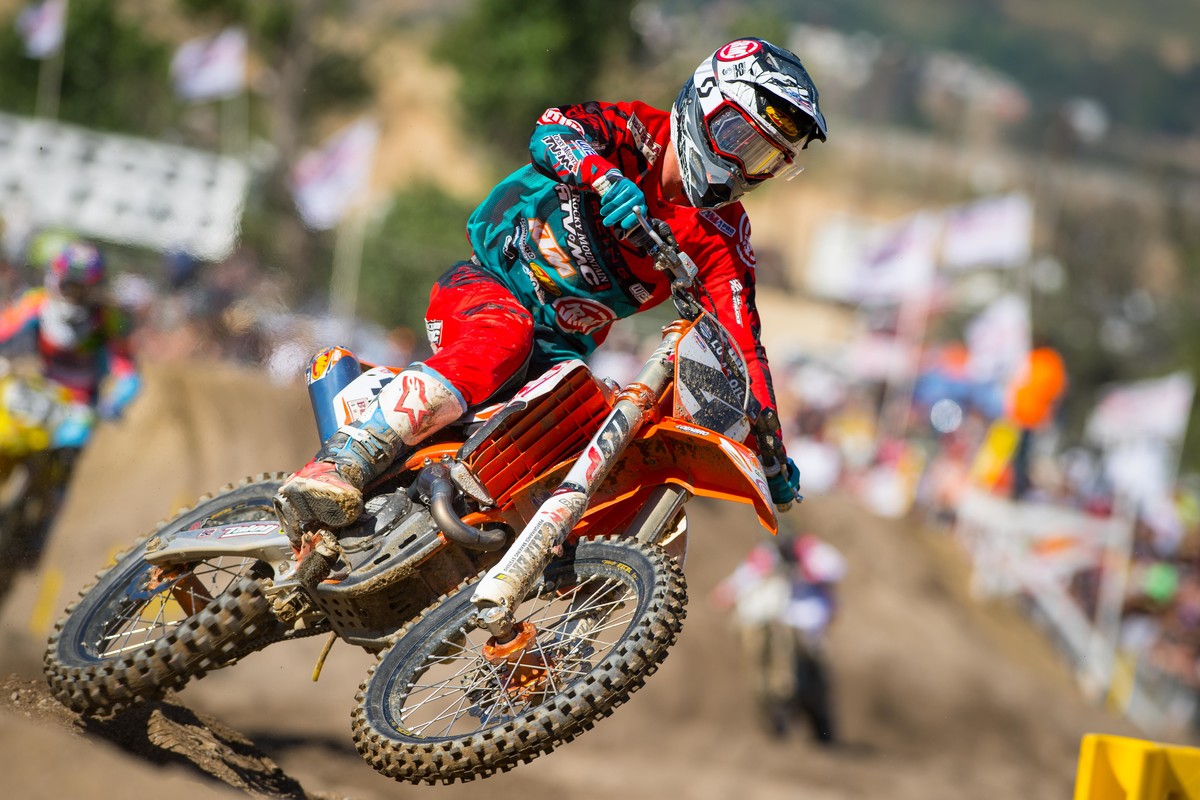 After Hangtown, it looked like Eli Tomac might run away with the title. But then at Glen Helen, a win by Marvin Musquin caused the points lead to change hands and proved that it would indeed be at least a two-horse race.

Thunder Valley showed that another name belongs in that title discussion: Blake Baggett.

The former 250MX champion went 3-1 on the day — even outdueling Tomac in Moto 2 — to earn the first overall victory of his 450MX career and insert himself into the middle of the championship fight.

And Baggett’s win wasn’t even the day’s biggest surprise. That honor goes to Justin Bogle, who won the first 450 moto of his career in Moto 1.

Read on for a moto-by-moto breakdown of the day’s action at Thunder Valley.

Moto 1
Earlier in the day, there was a small fire in the RCH/Yoshimura Suzuki pits. Fortunately, the incident was extinguished, and the team was able to race Thunder Valley. The result: Justin Bogle’s first-ever moto win (in either class) in Lucas Oil Pro Motocross.

Coming around the first turn, it was Martin Davalos — in his first season on a 450 — taking the holeshot. Justin Bogle was close behind him, and Jason Anderson emerged with third once things shuffled out a bit.

So far this year, Marvin Musquin has consistently been a better starter than Eli Tomac, but this time, Musquin went down during the start of the race while Tomac was just outside the top five.

Early in the race, Davalos went down while leading, which allowed Bogle to inherit the lead. About five minutes into the moto, the top five was as follows: Bogle, Jason Anderson, Justin Barcia, Tomac, Cole Seely.

The first two rounds had to be disappointing for Barcia, but this moto gave him a chance for a rebound. He held off Tomac for third as long as could but eventually ceded the position to the Kawasaki rider.

After what happened at the start of the race, it seemed unlikely that Musquin and Tomac would find each other on the track, yet that’s what happened. Shortly before the midway point, Musquin had worked his way up to seventh. Then Tomac went down and got back up in sixth place with Musquin right behind him.

Tomac’s crash had allowed Seely to move up to third, with Barcia in fourth and Broc Tickle in fifth.

While all this played out, Justin Bogle was pulling away. With about 11 minutes to go, he had opened up an eight-second lead on Anderson, who was 10 seconds ahead of Seely.

After they both passed Tickle to pick up a spot, Tomac and Musquin resumed their battle, with Musquin passing Tomac to take fifth. Musquin then passed Barcia for fourth, leaving Barcia, Tomac and Blake Baggett (who had crashed along with Musquin at the start of the race) to fight for fifth. With under seven minutes to go, Tomac and Baggett both got around Barcia to move into fifth and sixth. Baggett then continued his charge by passing Tomac soon after.

Baggett, who was one of the fastest riders on the track by this point, soon caught Musquin and the two engaged in a back-and-forth battle. Baggett eventually emerged with the position and cleared Musquin for good. A few minutes later, Baggett caught and passed Seely for third.

Bogle continued to ride away unchallenged and ended up winning the moto — his first first-ever moto victory in either class — about eight seconds ahead of Anderson. Baggett joined them on the podium in third.

As for the top two title contenders, Musquin picked up a spot on Seely to move into fourth, while Tomac dropped a spot to Barcia to end up seventh. Those shakeups resulted in Musquin adding an extra four points to his championship lead.

Cooper Webb, who dealt with bike problems early in the race, originally finished 14th but was docked eight positions for cutting the track. The penalty officially placed him to 22nd, which means he received zero points for this moto.

Moto 2
On the heels of his incredible ride earlier in the day, Blake Baggett nearly had a holeshot but was edged out by Broc Tickle. Baggett passed Tickle to move into the lead, while Eli Tomac used a good start to pass Justin Barcia and Tickle to take second.

Tomac continued his charge to the front by passing Baggett, much to the delight of his home state fans in attendance.

Moto 1 winner Justin Bogle was unable to repeat his magic from earlier in the day. The Suzuki rider made an early appearance in the top five but ended up dropping several spots in the opening minutes.

Seven minutes in the race, Jason Anderson passed Barcia for third. Musquin quickly followed Anderson into fourth, then went inside of his training partner to take third away from Anderson.

Up front, Tomac and Baggett (separated by 1.5 seconds) had pulled away from all the other riders by the 10-minute mark of the moto. Baggett continued to stick with Tomac and was all over him by the midpoint of the race. He eventually made a bold move around the outside of Tomac (off a jump and into a banking) to steal the top spot with about 13:30 left on the clock. From there, Baggett continued to fly around the track and quickly put some distance between himself and Tomac.

Baggett ended up winning the moto by 12 seconds over Tomac. Baggett’s 3-1 moto finishes also secured him the overall victory.

It was the first 450MX moto win and overall win of Baggett’s career. He has now finished top-three in three consecutive motos and suddenly finds himself in the thick of the title discussion.

In the first three rounds of the season, the 450 Class has seen five different moto winners and three different overall winners.

Musquin finished third in the moto, which (when paired with his fourth-place result in Moto 1) was enough to put him on the box in second overall.

Moto 2 featured a bounce-back ride for 450MX rookie Cooper Webb. His charge up to fourth place included a thrilling back-and-forth battle with series veteran Josh Grant in the closing laps. The fourth-place finish is a new career high for Webb in the 450 Class.

Anderson followed up his second-place finish in Moto 1 with a sixth-place result in Moto 2, good enough for third overall.

Unable to find the speed from the first moto, Bogle ended up ninth in Moto 2. His 1-9 results netted him fourth overall.

Tomac (7-2) took fifth overall and lost two points to Musquin in the championship standings. Musquin now holds a 17-point lead over Tomac in the 450MX standings.

But Musquin and Tomac have a new threat to worry about: Baggett. After today’s win, Baggett is just two points behind Tomac and 19 points back of Musquin.

The riders are off next week before the battle resumes at High Point on June 17.