A hearing overnight by the FIM International Disciplinary Court has overturned the decision to reinstate the eight disqualified riders in appeal. 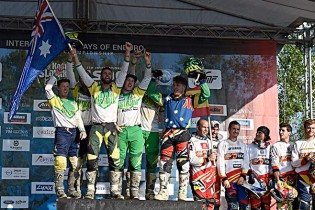 The decision means Australia has officially been declared World Trophy team winners with Italy in second and France coming in third.

The FIM statement is as follows;

Following a hearing held at the FIM headquarters in Mies on 2 November 2015, the CDI Sole Judge appointed to hear the case, Mr Jan Stovicek (Czech Republic) took a decision on the merits. The operative part of the decision was notified to the parties earlier today. The reasoned decision will be issued shortly.

The CDI rejected the Appeals lodged by the Fédération Française de Motocyclisme (FFM), the Real Federación de Motociclimo (RFME) and the Auto-Cycle Union (ACU) against the decision of the International jury disqualifying eight riders who missed a Route Check. The disqualification will therefore stand.

The amended rankings of the FIM World Trophy of the 2015 FIM International Six Days of Enduro are attached to the present document.

In its Appeal, the FFM petitioned for a stay of execution of the Decision in application of Article 4.8 of the FIM Disciplinary and Arbitration Code, which was granted by the CDI in view of the urgent nature of the matter and the exceptional circumstances of the case.

Kawasaki Juniors Set themselves for a monster 2016

The KX Junior Squad is back with more skill and determination than ever following a triumphant year of racing and development in 2015. […]