Australian Off-Road racer Andy Wilksch has signed on for a third year with Motul Pirelli Sherco for the 2019 season.

Wilksch looks set for a break-out year in 2019 after an exciting end to 2018 that saw the Sherco rider race to a gold medal at the 2018 International Six Day Enduro in Chile as part of the three-rider Australian Junior Trophy Team for riders under 23.

Despite no racing over the summer, Wilksch has been training and getting acquainted with the Sherco 500 SEF Factory edition. The Motul Pirelli Sherco Team predict a big effort when the Australian Off-Raod Championship kicks off in Toowoomba, Queensland on March 9 and 10. 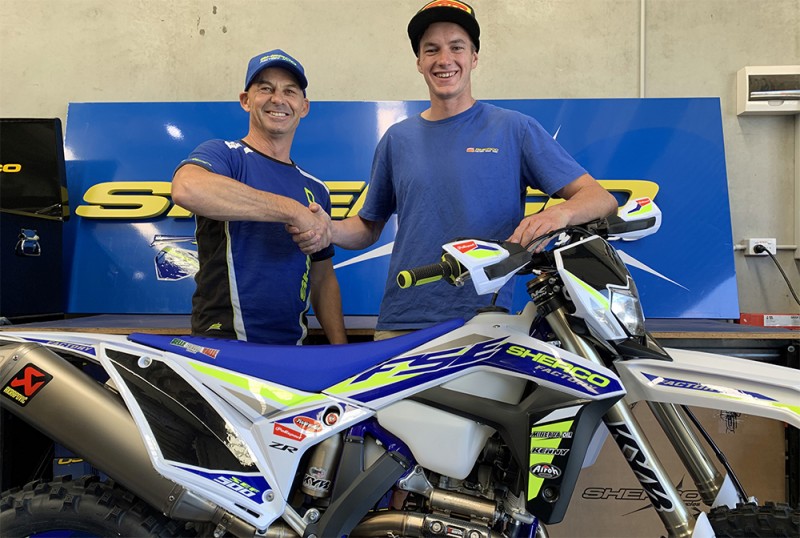 “It’s great to have Andy’s loyalty and commitment to the Motul Pirelli Sherco Team,” said Team manager Derek Grundy. “Andy is a rider with a lot of potential. He’s also a rider of good character which makes him a pleasure to work with. We’re working on some finer aspects of his racing which we believe will set him up for his best-ever season of racing in 2019.”

Whilst Wilksch remains in the E3 class for another year, he is stepping off the Sherco 300 SE-R two-stoke to the new 500 SEF Factory edition which Grundy regards as a positive move.

“Andy rides the four-stroke really well. He’s smooth and seems to gel really well with the ample power of the 500. The Factory model is so well equipped it’s just a matter of some personal setup detail that will have him ready to take on the best Australia can throw at him.”

Wilksch will remain quite busy during the off-road racing season when he fronts up to the 2019 Hattah Desert Race and selected regional events in between the AORC and SAORC.

“I’m really looking forward to racing the 500,” said Wilksch. “We’re really focused on the AORC and I want to be on the podium at every round. As for the South Australian Championship, I want to back up my title and go for as many round wins as I can, and I’ll be giving Hattah a fair shake too. The 500 is a pretty awesome bike that’s capable of winning. The Motul Pirelli Sherco Team is readier than ever, and the rest is up to me.”