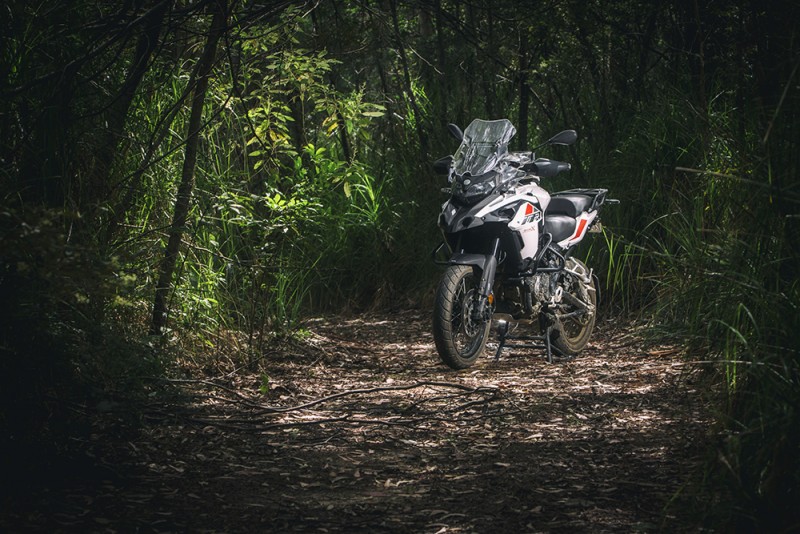 WORDS AND PICS BY DAMIEN ASHENHURST

The market for the $10,000 and under adventure motorcycle used to offer-up decent machines that stayed largely unchanged for years. I’m thinking of the KLR650 and DR650 specifically here, but recently there’s been a few new models thrown into the mix such as SWM’s Superdual X, BMW’s BMW G 310 GS Suzuki’s V-Strom 250 (bit of a stretch maybe) and the Benelli TRK 502X.

We tested the SWM in the previous issue of UAB and overall we were impressed and believe it was a good package for the price. Now we have the Benelli TRK 502X in the shed and we’ve been giving it a solid workout.

The Benelli name needs little introduction, as one of the most historically famous European monikers, but it is in fact no longer Italian, it’s Chinese while still designed in Italy. Benelli is now owned by the Qianjiang Motorcycle Group which is one of the largest manufacturers of motorcycles in China and they’ve been having a lot of success with the Benelli name in a range of markets. The TRK 502X is the company’s flagship adventure model and while we hear there are literally bigger things on the horizon, this is the bike Benelli is using to bust into the explorer market and they are doing it at a budget price. 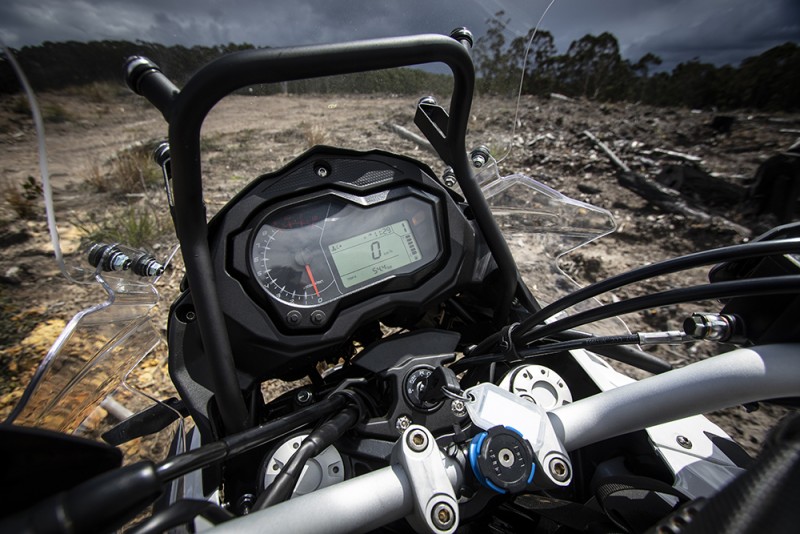 The ergonomics on the TRK are all adventure with wide, forward set bars, decent footpegs and a wide and soft seat. The bike has a good size windscreen, crash bars, handguards a centre stand, a USB accessories plug and a rear carry rack which are things that tick the adventure boxes and show that Benelli is pushing the value angle just as SWM is and its impossible not to be drawn to manufacturers when they’re in this generous mood.

The seat height is a reasonably low 840mm by which I can have both feet flat on the ground which opens the TRK up for use by the vertically challenged or female riders after a bike that doesn’t require a stepladder to climb on to.

The EFI fed engine is a 499cc DOHC, eight-valve parallel-twin that produces a claimed 48Hp (similar to a DR650), which runs to a six speed gearbox and finally to a chain drive.

The frame is a steel trellis design while the fork is 50mm USD (non-adjustable) and the shock does have adjustable spring preload and hydraulic rebound and compression. The spoked wheel set is 19/17 and the switchable ABS is handled by a Bosch unit. 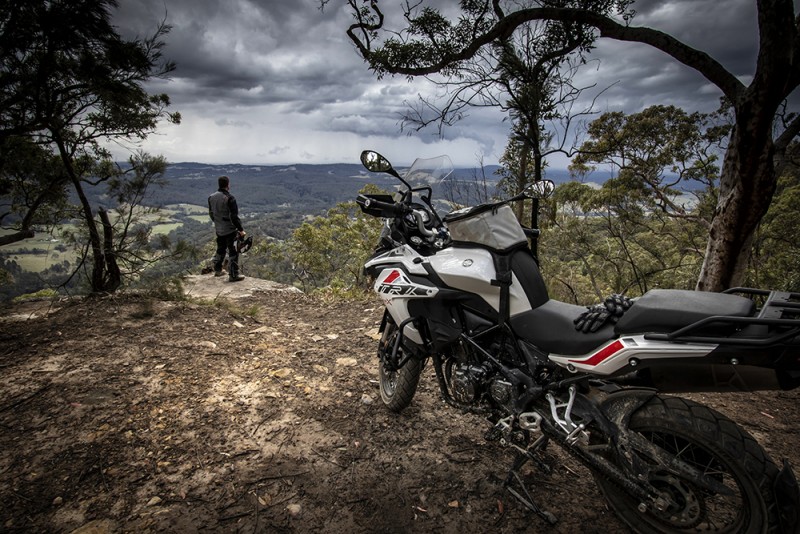 I found the bike comfortable in the sitting position right away; I took the rubber footpeg inserts off as soon as possible. The seat is excellent and the bar bend is good and the footpegs are well placed.

Standing-up is restricted by the 20 litre tank shape which is nice to look at but it digs into your thighs. This means getting well forward requires you to bend at the hips with basically straight legs which is both awkward and fatiguing.

The bike fires to a start with a fairly subdued exhaust note but don’t be fooled, the engine is the star of the show without a doubt. At 500cc it’s easy to manage but still has a decent amount of mumbo to it for a smaller capacity pushing the 235kg claimed weight. It’s happy to sit at 110kph or to chug up a difficult hill and while it sits at the smaller end of the adventure engine curve, it didn’t leave me desperately wanting more which was a surprise to be given I’d just come off the monstrous Triumph Tiger 1200 XCa and Honda Africa Twin AS. In fact it’s not all that dissimilar to the Ténéré 660 but without as much top-end. The gearbox is seamless and the cable clutch is light and has a great feel so feeding gears up and down in intense terrain or riding the clutch on hills is no big deal at all.

The rear brake and gear levers are both steal which is old-school and I like it because you can bend them back into shape should they be pretzeled by a solid knock.

The TRK is tempered by two things. One is the incredibly soft fork which is OK on the road, OK on the open trails but doesn’t do G-outs, or largish square edges well and pushed in anything soft. The fork has no native adjustment and while it can probably be sorted without much fuss in a workshop, it sets the tone of the bike quite early. The other is the rear brake which is quite weak and offers zero feel. The front brake is actually very good and you can rely on it as much as the fork will allow before it dramatically dives.

It’s a bike clearly for the commuter/light-adventurer who isn’t interested in straying off the dirt roads or 4WD tracks which the TRK aces at a reasonably sedate pace, and you can ride around the whole country on tracks like that. If the terrain gets more advanced, the TRK reaches its limits. If you’re after an aggressive offroad blast that clears the native fauna within a five-kay radius then this isn’t the bike for the task. But there are plenty of bikes out there that can offer that kind of bombastic performance though so what we need is more easily of the accessible machines, and that’s what the Benelli is. Having said that, I rode the Benelli through some pretty gnarly areas and while yes, the front did meet its limits and the rear brake did not much at all, I got everywhere I wanted to go and I kept on going ride after ride. 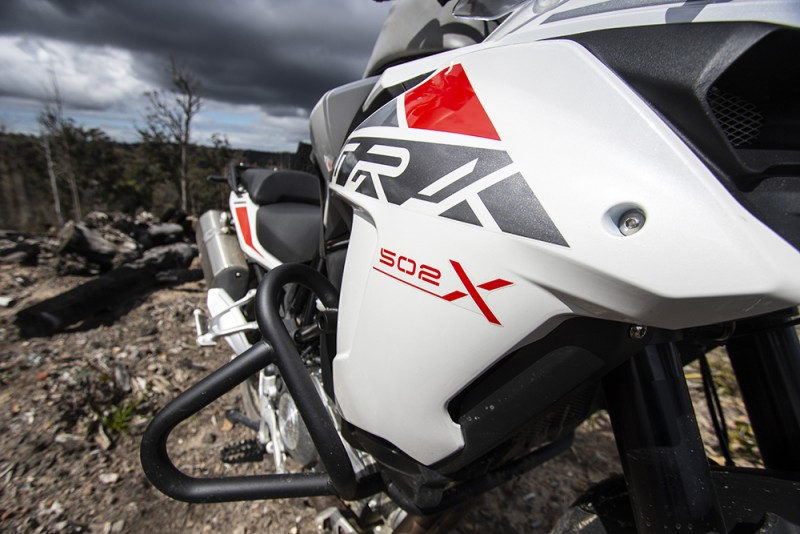 I guess the big question is; do I see $9390 worth of value in the Benelli? It’s not as capable offroad as the SWM, which has the better suspension, but it is more comfortable and certainly looks cooler. It gives-up 150cc to the Superdual X too but the SWM is geared so high it’s not that noticeable until it winds right-out. In fact, engine-on-engine the TRK will sit with the SWM and the Ténéré 660 all day in the bush and only lose ground on longer straights.

There are a few things that leave you scratching your head like the rearward placement of the fuel cap – no fun when you go to refuel and you have a tank bag on which then has to then come off. The wires to the rear blinkers are exposed and there is an unnecessary excess of plastic guard around the rear wheel.

If were to change a thing it would be to make the fork more robust because it’s the single biggest hindrance, but I have to temper that with how I like to ride which is reasonably aggressively.

So is it worth $9390? Yes it is. With a two year warranty that’s a great price and there’s almost nothing you need to add besides maybe panniers and grip warmers, so for about $10,000 here’s another bike ready to roll that’s impressively well-presented and embraces the adventure aesthetic.

It’s not going to perform like an Africa Twin because it’s not an Africa Twin and as such you aren’t paying for an Africa Twin – know what I mean? We have the TRK for at least six months, which I’m pretty stoked about so stay tuned to find out where we take the Benelli and how it holds up on our adventures. 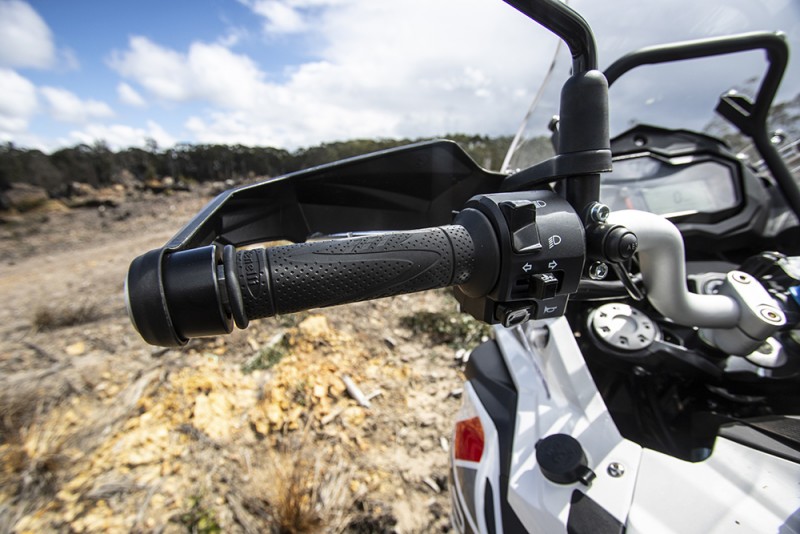 KTM OUTBACK RALLYE 2018 Settle in to the mellifluous tones of Adam Riemann as he takes you on a journey of discovery, open spaces, poor choices, proper adventure and all things KTM in the 2018 Outback […]

When adventure calls, it’s important to get there quick. All you need for the perfect adventure is an early start, a rough heading and a quick rendezvous with the mates – well, that and a new KTM 1050 Adventure. […]

Lost in the mountains of Nepal, escaping torrential floods and crumbling mountain trails, Riemann is befriended by village children, rides himself to sleep on a cliff-top road and experiences a place where people go to die. […]