If you had asked me what Italy was really good at yesterday I would have said football and…pasta. I really don’t have anything else. When I was a kid I had a mate called Vince and his mum used to yell at me for riding my BMX on her lawn. She could yell really loud, so I guess there’s another thing.

But it seems I’ve sold the Italians short because RedMoto Honda has released its RX line-up for 2019 and its got me stunned. RedMoto is an Italian World Enduro team that also offers racing kits through its distributors in Europe. What caught my eye here was the CRF400RX Enduro and the CRF300RX Enduro . The 400 based off the 450 but with an Athena kit that takes the CCs down to 413. It’s reported that this model was the highest selling CRF in Italy and France in 2018 and why not? It’s going to have all the great handling characteristics of the CRF-RX but with a little less animal so it suits a broader spread of riders.

Now these bikes are obviously just drool tools for us because we can’t get them here in Australia. Even if we could you can’t register the RX because we live in a nanny state and Honda Japan don’t see the point in making the effort – even though we reckon the CRF450RX is shit hot and would sell like crazy. But we’d love a chance to spend a day on the CRF300RX Enduro…that’s a really clever idea that would be ridiculous fun. 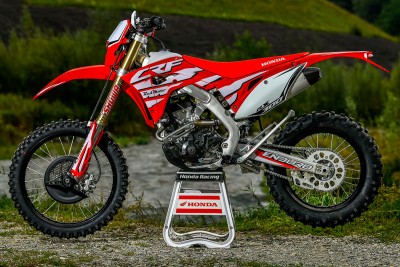