Honda is back in the 450 enduro game, announcing their all-new Honda CRF450L. Based off the motocross-model, the CRF450R, the 450L is a road-legal machine, featuring long service intervals, a six-speed gear box, cush drive hub and more usable power.

OVERVIEW
It is unmistakably a race-bred CRF – and looks it – but with the additions and modifications needed to be the road-legal dual-purpose Enduro we’ve been waiting for. As such, the CRF450L is a complete package, as happy roosting trails as it is linking them up on-road. It’s still a CRF450R; just one that’s quieter, from the engine to the new exhaust. Both fuelling and ignition maps are now managed by an 02 lambda sensor; compression ratio has been lowered and crank mass increased for improved drivability. The gearbox is a 6-speed – for longer legs on the road – and a cush drive has been added to the 18-inch Enduro spec rear wheel.

The plastics are lifted directly from the CRF450R and all lighting is LED, with the front headlight in particular throwing out a penetrating beam. Increased volume for the titanium fuel tank adds range and all the items that make the CRF450L ready to purchase as a licensed, road going machine – such as speedometer, horn, indicators and mirrors – are standard. When it’s a Honda, build quality and superior engineering are always a given, but this is where the CRF450L really stands out; it is designed to go 32,000km between major strip downs! From the trail-rider’s perspective, that’s all you want and need – something that is beyond reliable and expected of a new Honda Enduro machine. The CRF450L raises the bar in all areas. 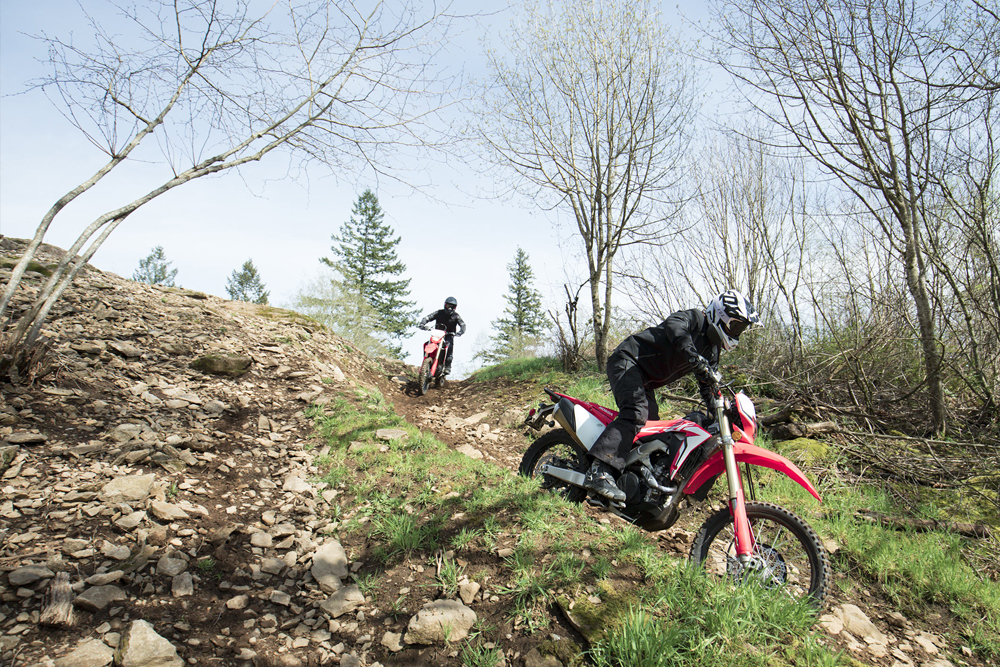 ENGINE
While the chassis was more straightforward to convert from its CRF450R moto-crosser specification to a dual-purpose performance level, the 449cc engine needed adaptation for road compliance and to ensure it was usable for a wide variety of riders in many differing situations both on and off-road.

While the fundamental architecture of the four-valve Unicam powerplant remains the same, many details have been changed to support the broader role: the crank’s mass has been increased, resulting in 13% more inertia which, for a trail rider, equals improved torque feel and response; valve timing has been revised to give the broader, smoother spread of power and torque; the gearbox is now 6-speed, rather than 5 for longer range use on tarmac; left and right engine covers wear outer covers to reduce noise; Elsewhere, the ACG has been uprated, to provide the required electrical power for the LED lights and to maintain battery charge during lower-speed running. The battery itself is a high-volume unit (Lithium Ion) Bore and stroke are unchanged from the CRf450R, at 96mm x 62.1mm, but the piston uses 3 rings instead of 1 for greater durability. Compression ratio is 12.0:1 (compared 13.5:1).

The redesigned airbox feeds the PGM-FI, managed by a lambda sensor in the large-volume single exhaust (which replaces the ‘stubby’ dual-pipe design of the CRF450R). An Air Injection (AI) system and catalyser clean up the spent gases. The four-valve Unicam cylinder head features a finger rocker arm on the inlet valves; valve lift is 10mm with 8.8mm exhaust valve lift. Inlet valve diameter is 38mm. The valve springs are oval in cross section and valve angle is 9° intake/10.5° exhaust. The clutch spins 7 friction discs with a 2mm clutch plate efficiently dissipating heat; the springs generate a good, consistent connection. 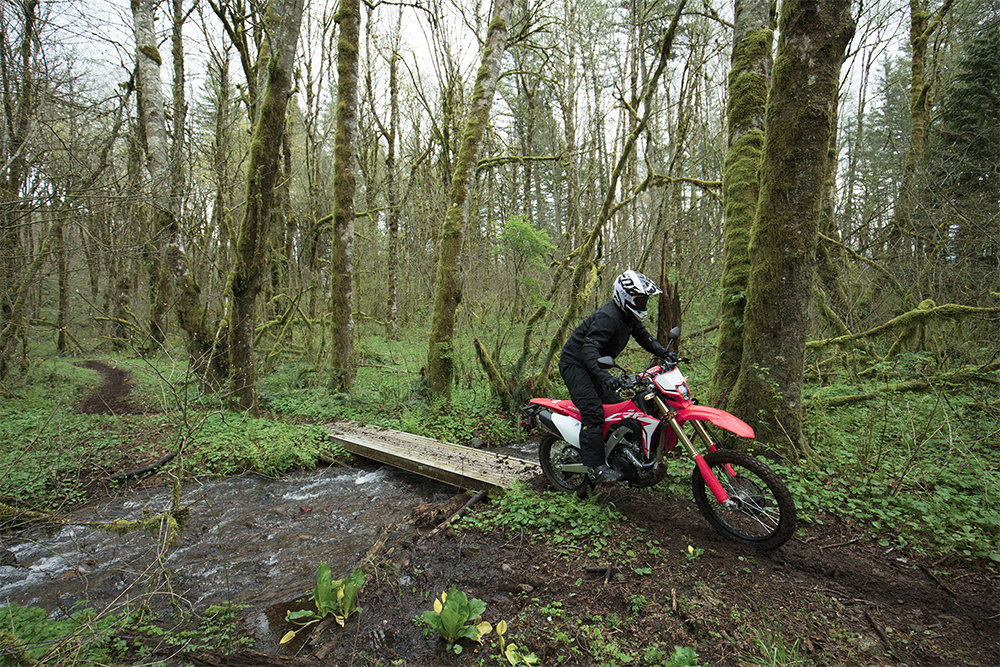 CHASSIS/SUSPENSION
Having received a ground-up redesign in 2016, the CRF450Rs chassis was a perfect place for the CRF450L to start from, with changes to match the machine’s vastly broader usage range and road legal mission.

Firstly, the tapered dual-spar aluminium beam frame was made slightly wider at the swingarm pivot points, to allow for the greater engine width resulting from the 6-speed gearbox. The headstock was modified to mount a steering lock and the aluminium swingarm injected with urethane to reduce noise. The rear subframe is the same, with mounting point adjusted to take the taillight and the right-exit single exhaust muffler. Rake and trail are set at 28.2°/123mm with wheelbase increased 3mm from the CRF450R to 1495mm, for greater stability. Both the R and the L feature 22mm fork offset and the same 466mm swingarm pivot point height. Kerb weight is 131.5kg.

A 49mm Showa steel-sprung USD fork – adjustable for preload plus compression damping – is matched by a fully adjustable Showa rear shock, operated through Pro-Link. A 260mm wave-pattern disc delivers effective heat dissipation, power and feel from the two-piston brake calliper working it; a matching 240mm wave-pattern disc and single-piston calliper is at the rear. Whereas the CRF450R machine uses a 19-inch rear wheel, the CRF450L has an 18-inch (to fit enduro-spec tyres), with the addition of a cush drive to absorb chain shock; a sealed 530 chain is protected by a plastic chain guard. The front wheel is a 21-inch and both rims are finished in black. Tyres are sized 80/100-21 front and 120/80-18 rear.

STYLING
The CRF450L carries the true CRF heritage, but with styling derived from Honda’s new-gen CRF-R model directive, including the durable film-insert graphics and stream lined bodywork. Also carried over are the rear mudguard, side panels and bash plate. Svelte side shrouds hide a larger radiator volume plus electric fan. All lighting (including the indicators and license plate light) is LED; a speedometer, horn, brake-light switch and mirrors satisfy legal requirements while a side stand adds convenience. The titanium fuel tank is 7.6L and the fuel cap locks in place.