Antonio Cairoli has rocketed back to the top of the MXGP leader board with a 1-1 result in Spain. Jeffrey Herlings struggled with poor starts but remains tied on points with Cairoli.

Watched by 26,000 fans Cairoli was in the mood for full points following runner-up positions in both Argentina and Holland. The Sicilian stalked Romain Febvre for seven laps of the first moto and crossed the line almost five seconds in front of teammate and championship leader Jeffrey Herlings. In the second outing #222 seized the holeshot. He passed Gautier Paulin and massaged a race-winning margin over a battling Herlings to record his first 1-1 of the campaign. The Grand Prix of La Comunitat Valenciana delivered the defending number one’s 84th career success and 300th top three moto finish. Cairoli’s achievement also ensured at least one victory in all fifteen of his world championship seasons since 2004.

Herlings went 2-2 and lamented a poor start in the first moto and a first lap tumble in the second. The Dutchman had a tough day cutting through the pack – setting the fastest lap both times – but the victor of Argentine and Dutch rounds secured a third consecutive trophy and ties on points with Cairoli at the tip of MXGP. Despite the same number of triumphs and second places the FIM have given the red plate to Cairoli for round four by virtue of his status as the most recent winner. 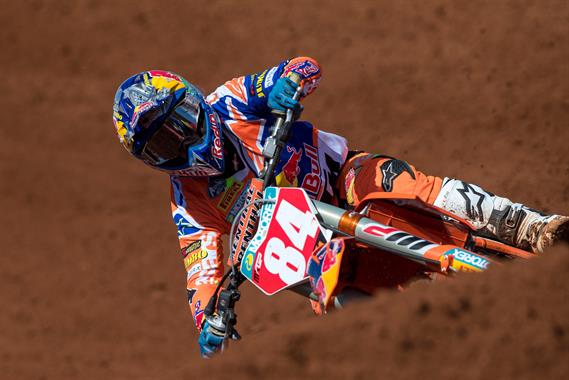 Cairoli: “I’m really happy about the weekend. We made some changes to the bike for improvement and I was very pleased to get back from a bad start to second on the first lap of the first moto. I struggled a bit to pass Romain. I had the better speed but took a while to make it happen. It was good to win. A holeshot in the second moto and Paulin was aggressive and with a good rhythm but I could pass him and control the situation. I knew Jeffrey was coming back strong but we could respond with some good lap-times. Everything went well and I’m really happy to win here in Spain. It is my 84th win; it’s really nice and the season is going good. I’m happy to fight with Jeffrey and the other guys. The red plate doesn’t matter too much at the moment. It is about trying to improve and we are trying different things but we have a good set-up.”

Herlings: “It wasn’t a good weekend and I came to this track aiming to win but I messed up both starts; the second one wasn’t too bad but I crashed on the first lap and had to come back from somewhere around fifteenth and was still able to fight my way up to Tony. The bike we have is really solid but we might have some new parts to try for the starts and hopefully we can improve with that. Once the starts are better – and I also need to look at what I am doing on the bike – then we’ll be able to put ourselves in a much better position. The competition is strong here and it is tough to come through the pack; every weekend has been like this and I either barely make it or run out of time. I have a great team behind me and we’ll be working on it in the coming weeks.”