The Yamalube Yamaha Official Rally Team of Adrien Van Beveren, Xavier de Soultrait, Franco Caimi and Rodney Faggotter are all-set for the most demanding challenge on the annual rally calendar – the 2018 Dakar Rally held this year in Peru, Bolivia and Argentina. In what’s expected to be the toughest Dakar in recent years, the Yamaha Racing quartet will be proudly carrying a special Ténéré 700 World Raid livery on their WR450F Rally machines.

Under the guidance of team director Alexandre Kowalski, team manager José Leloir and highly-experienced sport manager Jordi Arcarons the quartet of Yamaha riders head to South America looking to improve on last year’s highly positive performances. Their ultimate goal is to challenge for the podium and successfully complete the hugely demanding event.

Following a stellar performance in 2017, which saw him end his Dakar Rally adventure fourth and less than one-minute behind a potential podium result, Adrien Van Beveren is looking to finish even higher in 2018. Building his speed following injury early on during the 2017 season, the Frenchman is now at the top of his game and ready to do battle in South America.

Making a strong statement throughout 2017 following his Merzouga Rally victory and top three result at the Desafio Ruta 40, Xavier de Soultrait has demonstrated he has what it takes to battle on equal terms with the rally elite. Completing more than 20,000km of racing during the 2017 season, the Frenchman will be a strong asset for the Yamalube Yamaha Official Rally Team at the upcoming Dakar.

Demonstrating impressive speed in his first event aboard the WR450F Rally, team rookie Franco Caimi wrapped up the 2017 Merzouga Rally with an impressive third place overall result. Winning stages and continuing to improve during the season, the young Argentinean will be pushing for stage victories at the 2018 Dakar Rally while gaining further rally racing experience.

The Yamalube Yamaha Official Rally Team is completed by Rodney Faggotter. Entering his second Dakar Rally aboard WR450F Rally machinery, the Australian is looking to make the most of his experience and mechanical aptitude to assist the team and get as close to the top five as possible.

Honouring the imminent return of one of the most successful motorcycles ever, the team’s four WR450F Rally machines will be proudly wearing the Ténéré 700 World Raid name and graphics throughout the 2018 Dakar Rally. 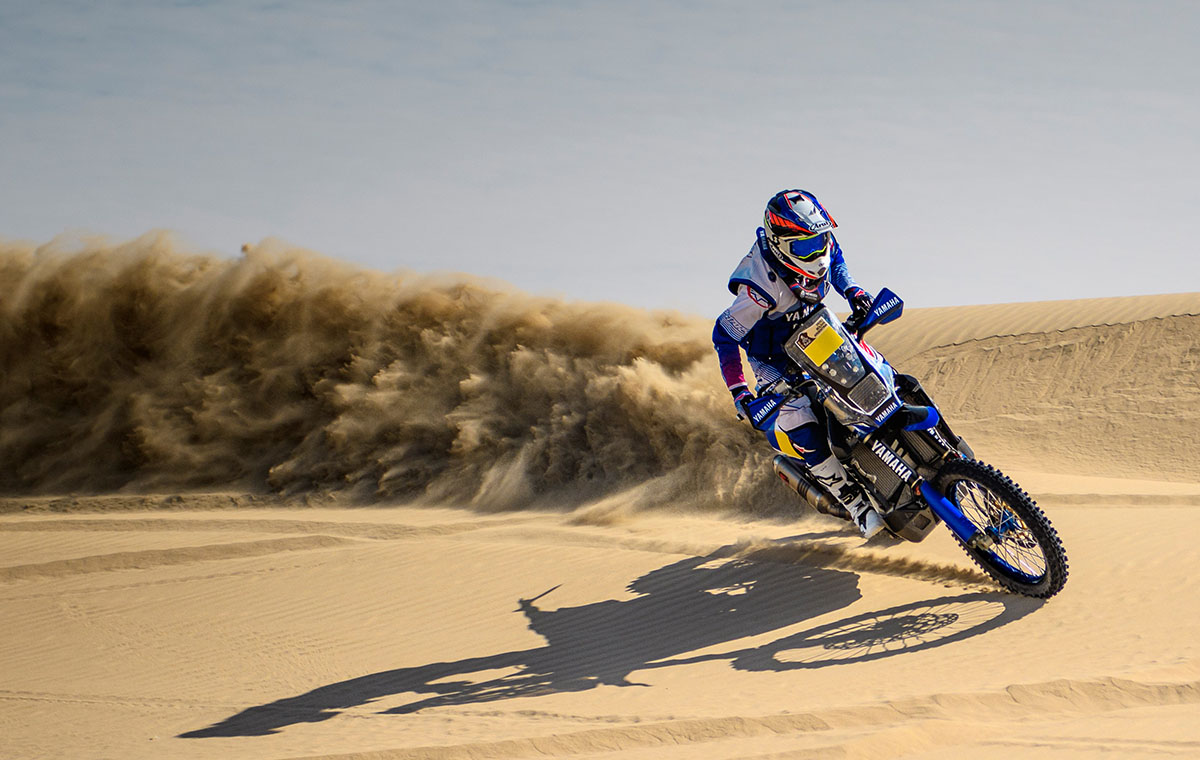 Including seven 100% off-piste stages and five stages at an altitude of more than 3,000 meters, this 40th edition of the Dakar Rally is expected to be one of the most demanding in recent history. Kicking off in Lima, Peru on January 6, 2018, competitors will have to contest 4,500km of timed special plus another 4,500km of liaison sections on their way towards the finish line. The big finish of the 2018 Dakar Rally will take place in Córdoba, Argentina on January 20.

Adrien Van Beveren – Yamalube Yamaha Official Team rider
“I’m super happy with the way things are at the moment. My training and preparation have been great and to be honest I’ve never felt so strong. I did lots of moto riding during the last couple of months, together with an intense programme of physical preparation. I won’t stop and my training will go on until the moment I get on the plane to Peru. I’m happy I had no issues and remained 100% healthy. I’m also happy I got to spend lots of time training on the rally bike. As an athlete, I always want to take things step-by-step and this is exactly what I did in 2017. I got back from my injury even stronger mentally and now I believe I am strong enough to win the Dakar. This might just be my third year but if all goes well I know I have what it takes to bring home the win. At the same time, I really want to do even better this year. It is going to be a long and tough two weeks, with no easy stages to recover. The key is to remain consistent and keep pushing as much as I can.”
Xavier de Soultrait – Yamalube Yamaha Official Team rider
“We’re heading to Peru in a month and I’m 100% ready for the challenge. I’ve had a good season of racing and also spent time training in Spain and Morocco. We did some long days of navigation training and lots of riding in deep sand. I’ve done more than 22,000km of rally racing and navigation training in 2017 and this has helped a lot. I feel that all is in the right place at the moment and honestly it’s the first time in my career that I feel that way. The new bike is awesome and within the team we have the right people to do each job. I want to give it 100% at the next Dakar. I am aiming for a strong start and then I will try to keep the momentum going. I’ve had some great stage and race results during the season so all the pieces of the puzzle are there for me to battle for the top next January.”
Franco Caimi – Yamalube Yamaha Official Rally Team Franco Caimi – Yamalube Yamaha Official Rally Team rider
“I’m really looking forward to the Dakar. I was happy get my rally machine over in Argentina a bit more than a month ago, so I immediately started training on it. Spending time on the rally bike helped me improve my speed and also my technical knowledge on the bike. I managed to adapt even more and now I am confident and happy to head to Peru in January. For me the special ingredient for the 2018 Dakar will be the sandy stages in Peru. Then there’s also the Marathon stage in Argentina and this is also going to be a big challenge. Navigation will once again be key. I would be happy with a top five overall result but obviously the final podium is the ultimate goal for me.”
Rodney Faggotter – Yamalube Yamaha Official Rally Team rider
“I can’t wait for the 2018 Dakar to begin. Following my wrist injury at the Baja Inka, I gave my body some time to properly recover. The last couple of months everything has been coming together and I’ve been focusing all my efforts into my training and preparation for South America. It’s been quite warm in Australia and I think this will be an advantage for me in the dune stages of Peru. I’m expecting the first week to be really tough physically, and in terms of navigation. The quicker you get through the tough moments the better it will be. Navigation will be paramount throughout the event, I believe. I want to have a good clean run and do my race. If it all goes well I am confident of a top 10 overall result and I know I could even do battle for the top five. I want to be there for my teammates when and if they need me and also make sure that I do my own race.”
Alexandre Kowalski – Yamalube Yamaha Official Rally Team director
“Going into the 2018 Dakar, I am proud to say that we have the strongest Yamaha team of recent years. Following our fourth-place result in 2017, we’ve made some vital changes and those have worked to our advantage. We are all highly motivated to succeed and we will do our best to make it happen. We’ve also made some big improvements with our race machines. The new bike is lighter, faster in a straight line and also more consistent in changing conditions. 2018 will also be a special year for us as we bring back the spirit of Ténéré. Racing has always been the base for Yamaha to develop their machines and that’s exactly our goal with the Dakar. Taking advantage of our experience after endless racing miles, we want to bring back the true spirit of adventure in the next generation of Yamaha production motorcycles.”
Race Schedule – Dakar Rally 2018
Stage 1 | Jan 6 | Lima to Pisco | SS: 31km | Total: 272km
Stage 2 | Jan 7 | Pisco to Pisco | SS: 267km | Total: 278km
Stage 3 | Jan 8 | Pisco to San Juan de Marcona | SS: 295km | Total: 501km
Stage 5 | Jan 9 | San Juan de Marcona to San Juan de Marcona | SS: 330km | Total: 444km
Stage 5 | Jan 10 | San Juan de Marcona to Arequipa | SS: 264km | Total: 770km
Stage 6 | Jan 11 | Arequipa to La Paz | SS: 313km | Total: 758km
Rest Day | Jan 12
Stage 7 | Jan 13 | La Paz to Uyuni | SS: 425km | Total: 726km
Stage 8 | Jan 14 | Uyuni to Tupiza | SS: 498km | Total: 584km
Stage 9 | Jan 15 | Tupiza to Salta | SS: 242km | Total: 754km
Stage 10 | Jan 16 | Salta to Belén| SS: 372km | Total: 795km
Stage 11 | Jan 17 | Belén to Fiambalá | SS: 280km | Total: 484km
Stage 12 | Jan 18 | Fiambalá to San Juan | SS: 375km | Total: 722km
Stage 13 | Jan 19 | San Juan to Córdoba | SS: 423km | Total: 904km
Stage 14 | Jan 20 | Córdoba to Córdoba | SS: 119km | Total: 284km