The KTM 450 SX-F FACTORY EDITION is a supreme and limited model with all of the parts that make the machine as factory as it gets. Already READY TO RACE right out of the crate with unrivaled performance, exceptional handling and the lowest weight in its class, this new model is win-ready from the very first push of the start button.

The 2018 KTM 450 SX-F FACTORY EDITION is machine that will be raced by Marvin Musquin and Broc Tickle at the highest level in the AMA 450 SX Championship. These highly sought after limited production machines feature a reworked chassis with new bodywork, an updated engine and new suspension settings with new triple clamp to ensure its owner will stay ahead of the crowd with agile, powerful performance at the lowest weight in its class. Combined with a lighter, more compact engine for enhanced handling, there is no match for this next generation FACTORY EDITION. 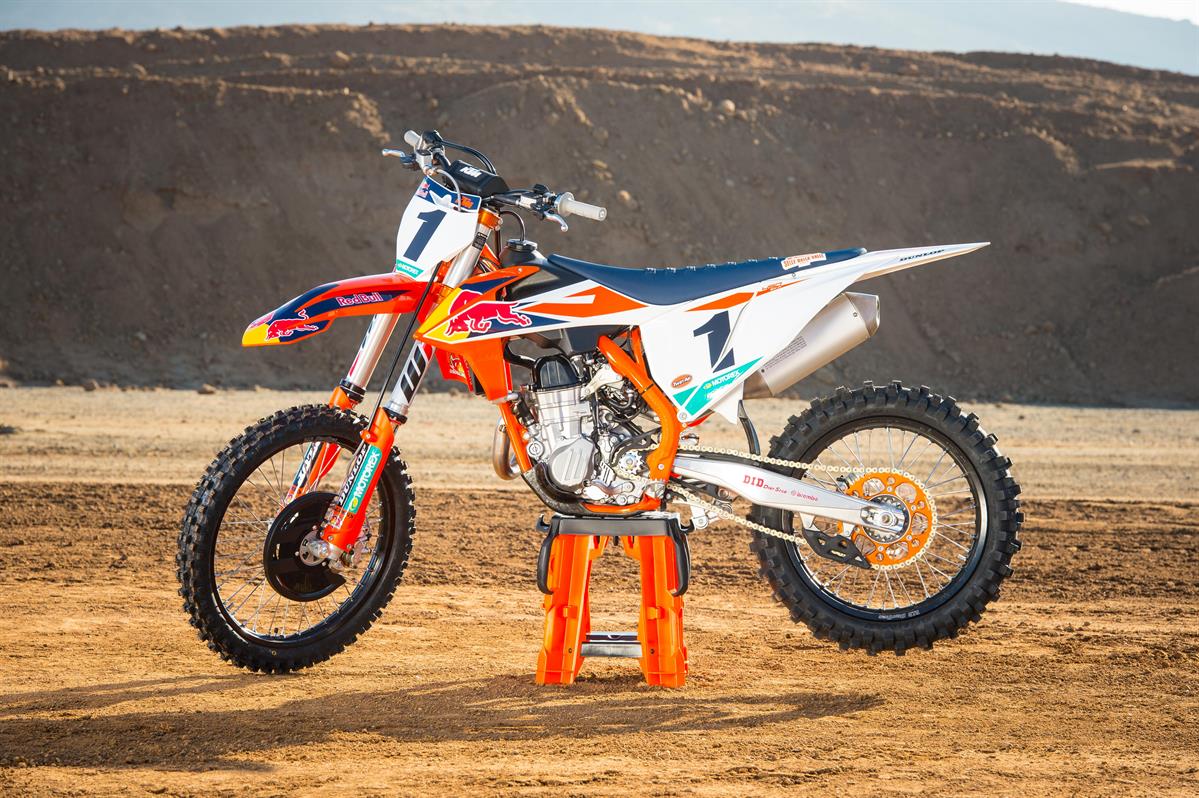 The 2018 KTM 450 SX-F FACTORY EDITION is also fitted with the following special equipment:

The Red Bull KTM Factory Racing Team, which is overseen by the legendary Roger De Coster and trained by Aldon Baker, is looking forward to contesting the new KTM 450 SX-F FACTORY EDITION in the new year. Musquin is joined by Broc Tickle, who won the 250 SX West Championship in 2011 and has enjoyed career podiums in both the Supercross and Pro Motocross series aboard 450 machinery.

For 2018 the Troy Lee Designs/Red Bull/KTM team will again serve as the springboard for the sport’s rising stars as the official KTM 250 factory team. The team boasts a mixture of old and new with rookie Supercross racer Sean Cantrell, rising star Jordon Smith, and a pair of season 250 class veterans, Shane McElrathand Alex Martin, rounding out the team’s solid lineup. Jessy Nelson will continue working with the team as a brand ambassador whilst working with the TLD amateur riders thanks to his knowledge and experience as a professional racer. Tyler Keefe will continue to oversee the team’s running whilst working closely with KTM with the goal of a strong assault on both 250 SX classes, as well as the outdoors series.

The Rocky Mountain ATV/MC – WPS – KTM team, which will field two riders in the 450 class for both AMA Supercross and Pro Motocross next season, as well as two riders aboard 250cc machinery, continues its association with KTM for 2018. Following a strong season in the Pro Motocross series, where he held the points lead during some stages this season with overall wins that earned him third position by the end of the championship, Blake Baggett will once again line-up on KTM machinery to contest the 450 classes both indoors and outdoors. He is joined by Benny Bloss, who steps back up to the higher capacity class having shown great skill and incredible promise leading into his professional career. Dakota Alix, who enjoyed fill-in rides for injured competitors aboard the KTM 450 SX-F last season, will contest the 250 SX West Coast series and outdoor 250 motocross championship. Anthony Rodriguez from Venezuela will compete the 250 SX East Coast Championship, having enjoyed a strong amateur career in the US as well as strong results in the East Coast series over the last three seasons.