From the get go our 2017 Husqvarna TC 250 long term project bike was always going to be an interesting and exciting dirt bike to really get to know.

I have to admit when I first got the call saying there was a 250 two-stroke heading my way to spend the next six or so months riding and racing, there was a Nano-second of hesitation and angst that crept into my mind.

Since 2005 every bike I have owned has been some form of Four-stroke MX bike, I had never really considered jumping back on and spending a year racing a smoker again, especially not with my current fitness regime!

But that slight hesitation, quickly turned to excitement as the prospect of seeing how well this new age two-stroke performed and with the aim of keeping the bike close to dead stock as possible and racing it at the usual list of events I race year in year out.

I picked up the crisp white beast from Moto Adelaide in South Australia and embarked on what would turn out to be an exciting year of racing.

The first item on the agenda was to spend a few days taking full advantage of  Adelaide’s beautiful sunsets to capture the TC 250 in all its glory, with two photo shoots. The bike out of the great is a work of art to look at and even after six months of racing MX, Enduro and Hattah, the Husqvarna though running white plastics and a white coated steel frame still looks amazingly good. 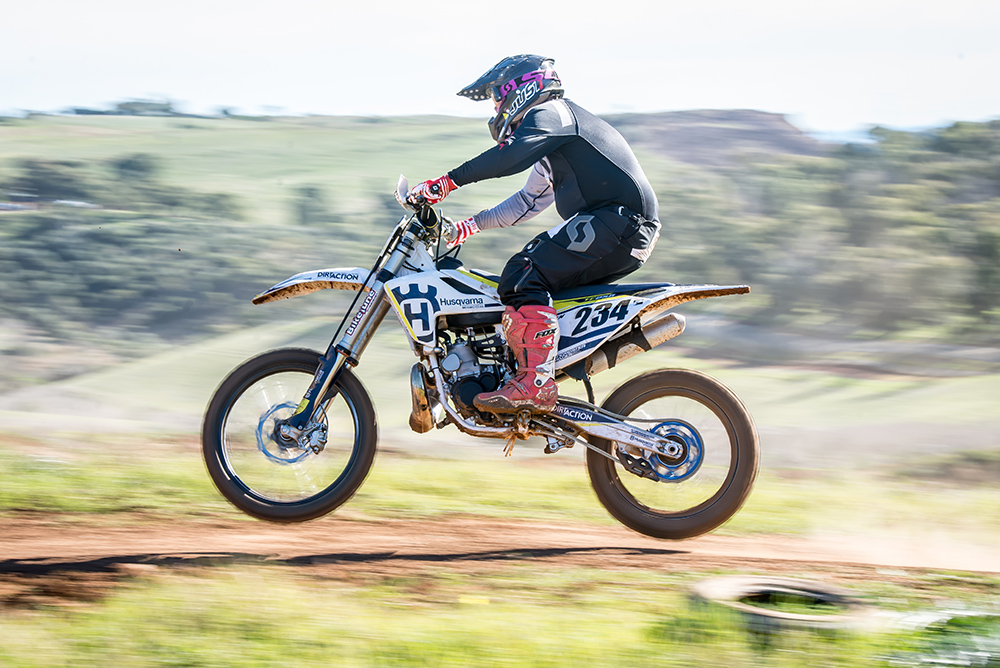 The bike has held up well, with only a few minor scuffmarks on the frame where my boots rubbed, up against it. As expected the Ringmaster Graphics that we fitted early on, were more than up to the task and still look close to brand new today.

The idea and then the execution by the crew at Ringmasters to run the number graphic set up that would easily allow me to cover up the first number on the plates as I swapped between different disciplines of riding also worked a treat and saved a ton of issues when jumping between local Motocross and Off-road events.

The idea of running a bike in stock trim was always going to be an interesting one, it is something I have done to some degree once before with a project bike, however in that case there was still a need to change a few things up, and coming into this, before I had the bike in my possession I was certain that I would need to change a few things up to get myself comfortable. Things like grips, the bend of handlebars, shift levers, brake levers, all the basic stuff that generally gets changed before you go racing.

However that did not end up being the case with the 2017 Husky. Coming with the same ODI grips that I have been running for the past few years, mounted to what proved to be a bend of Pro Taper bars that felt comfortable from the get go and stock brake and clutch levers, there was nothing in the cockpit that needed attention. I thought for sure the stock hand guards would come off after the first ride, but again with the way they have been designed and mounted to the handle bars they never once got in the way or felt like a burden to have on the bike, apart from looking a little awkward and big in the occasion photo ( A little like myself on a bike anyway!) they were not noticeable at all while riding. 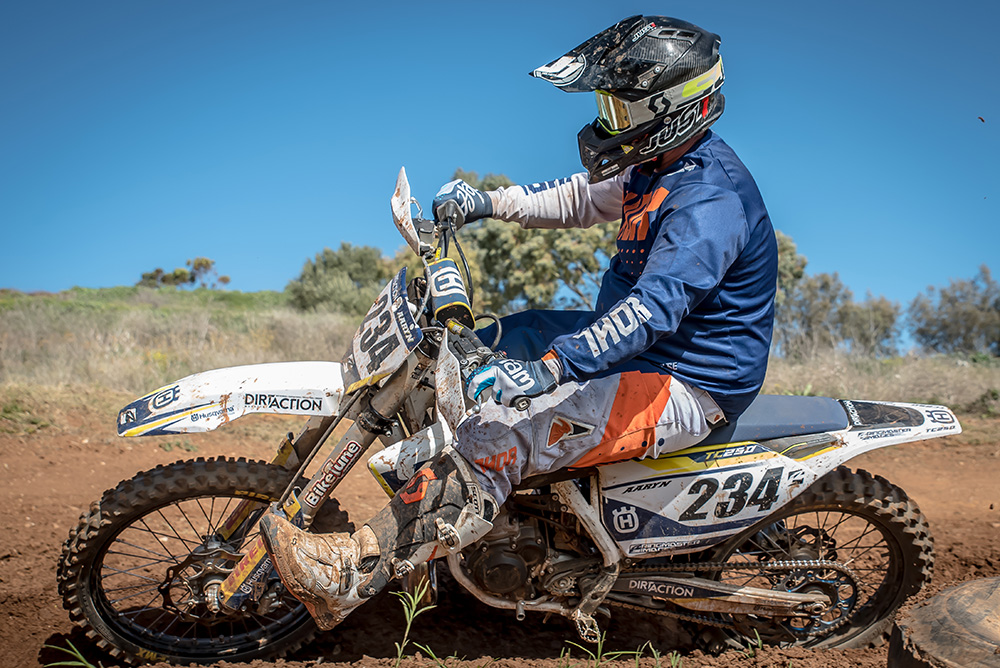 After six months of riding, apart from out weekend at Hattah where we ran the bigger tank from a TE250 thanks to Fraser Higglet, the only stock part on the bike we changed were the tyres, switching to the tried and tested Pirelli MX32 Mid Soft to suit the majority of riding as we jumped between sand tracks and deep loam in South Australia.

While the aesthetics and controls on the bike all became comfortable near instantly, there was once major part of this bike that was always going to take some time to get used to.

The switch from over 12 years of riding four strokes, over to a two stroke was always going to be an interesting one, and it did take some getting used to, but in the end for a different reason than what I thought.

The motor on the TC250 really did surprise me, sure it had plenty of get up and go, especially as you hit the meat of the power curve and the bike rocketed off into next week at the speed of light.

It was that two stroke sensation of speed that I thought would take some time to get used to and while it certainly was fun running the bike higher up in the rev range and listening to the two stroke scream, and would probably be an ideal way for a A grade or pro rider to race this bike, for a weekend warrior, Vet / C grade rider for myself after a couple of months of riding I found taking advantage of the great bottom end torque of this bike  and riding the bike lower in the rev range through the turns and winding it on out of corners proved to be not only and easier and more efficient way to ride, but also a lot quicker. 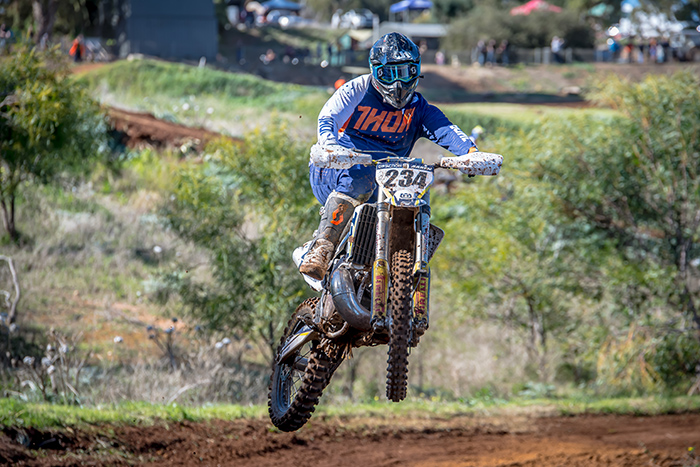 It amazed me just how well this bike would pull from low in the rev range, and at pretty much every race this year with the exception of Hattah, my lap times were faster later in the day once I had stopped trying to ride the wheels off the bike and scream it through the turns and rode pretty much how I would a four-stroke!

Overall my time with the 2017 Husqvarna TC 250 was a blast, from the tight and twisty South Australian MX tracks, to the wide open spaces of Hattah this bike handled and pulled my 100kg frame around with ease.

It is a bike I would love to keep in the shed and race at a few events each year, but more so the type of bike for a vet rider like myself that you take down to the track for a local ride day and just have a blast on. There is still something about riding a two stroke that leaves you grinning from ear to ear and this Husqvarna TC 250 delivers in spades in that department, yet has the ability to be ridden in the same manner as a four-stroke. This new age husky two banger does give you a taste of both worlds, but comes with that unforgettable two stroke sound and smell.