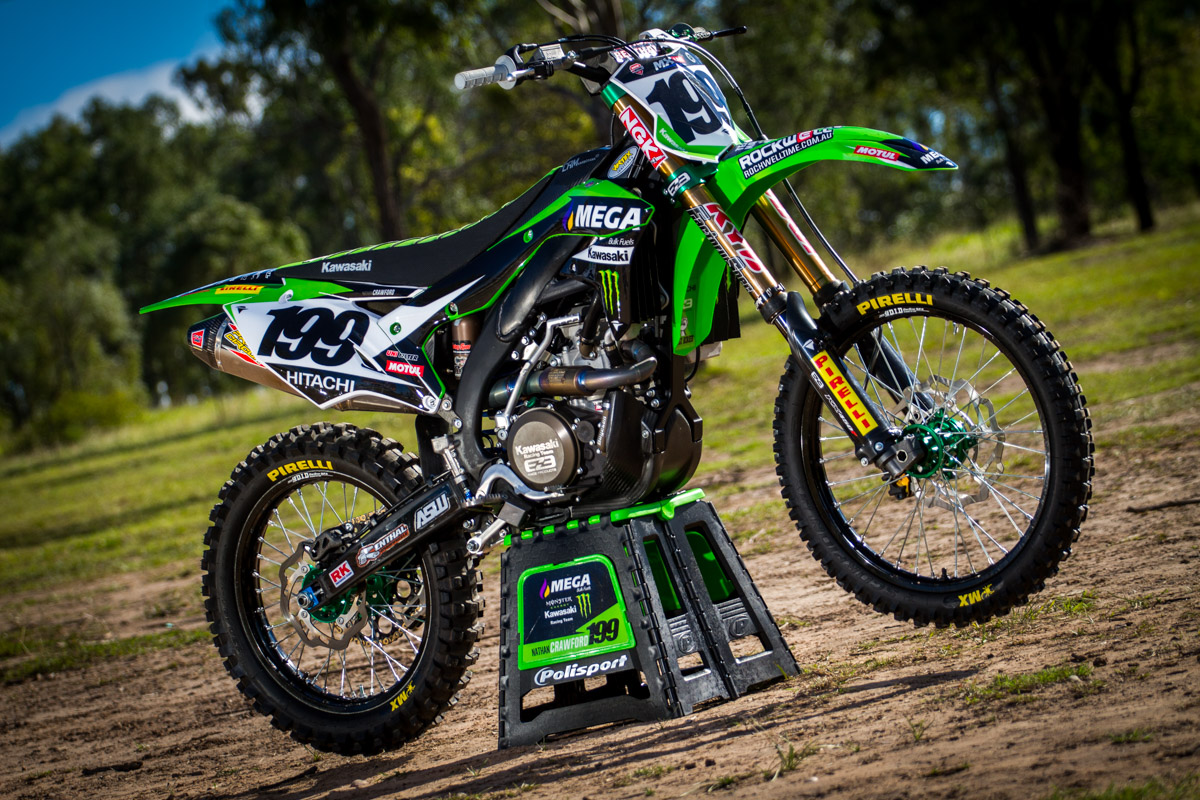 Where do you start with such a trick looking motorcycle? Cosmetically the bike is trick. Takt graphics are busy from a logo point of view but very clean from a design perspective. They have a bunch of anodising done which also give the bike its factory look. The frame and swingarm are anodised black along with brake calipers and some engine parts, very cool. The fuel tank, air box, sub frame, skid plate and various other little pieces are all carbon fibre; these parts alone give this bike a pretty exotic look. There are titanium foot pegs and plenty of other billet alloy parts like triple clamps and hubs. Items like alloy the foot peg guards and brake snake are sweet additions. There is a Titanium Pro Circuit exhaust system which looks right at home on this bike, a Boyesen water pump and billet clutch cover. The suspension is KYB A kit, the coatings not only adding to performance but also the overall look of this bike. There is also a Vortex ignition, braided rear brake line and Topline seat cover fitted.

The fuel tank, airbox, subframe, skid plate and various other little pieces are all carbon fibre; these parts alone give this bike a pretty exotic look 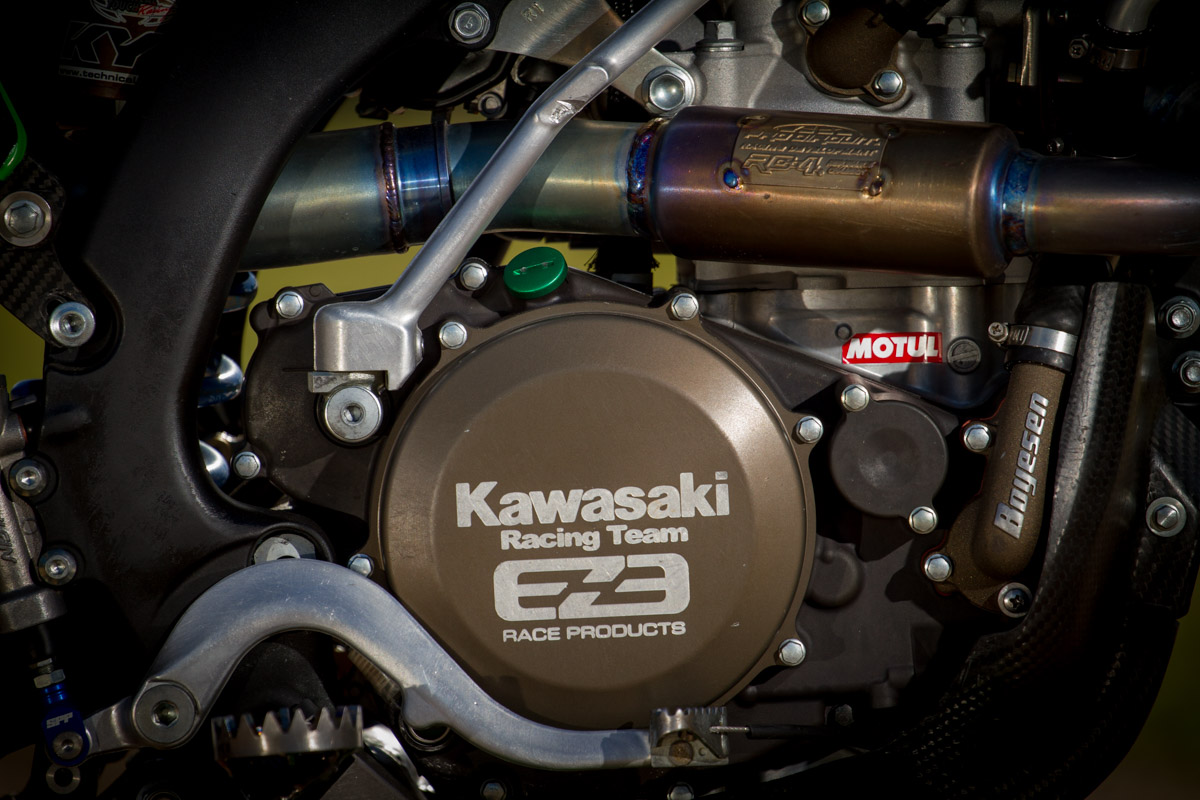 The team are working with a solid base here, the KX450F has always been a strong package and the current model is no different. The team have worked on increasing torque rather than brute horsepower in an effort to keep the bike as rider friendly as possible. They have increased compression slightly and added a Vortex ignition to customise mapping. Pro Circuit not only supply the exhaust but also the cams and the rest of the work is done in house with the race team. On the track the result is plain as day; even before you are on the track actually. As soon as I started this bike, which fired first kick, you can tell there is some grunt underneath you. Combination of a little extra compression and a Pro Circuit exhaust makes sure there is no mistaking that. This bike sways to the more aggressive side of power deliveries, even with the boat load of torque it produces there is some serious punch at the ready. I could ride it in third just about anywhere and at times would still use some clutch to deliver the power smoothly. 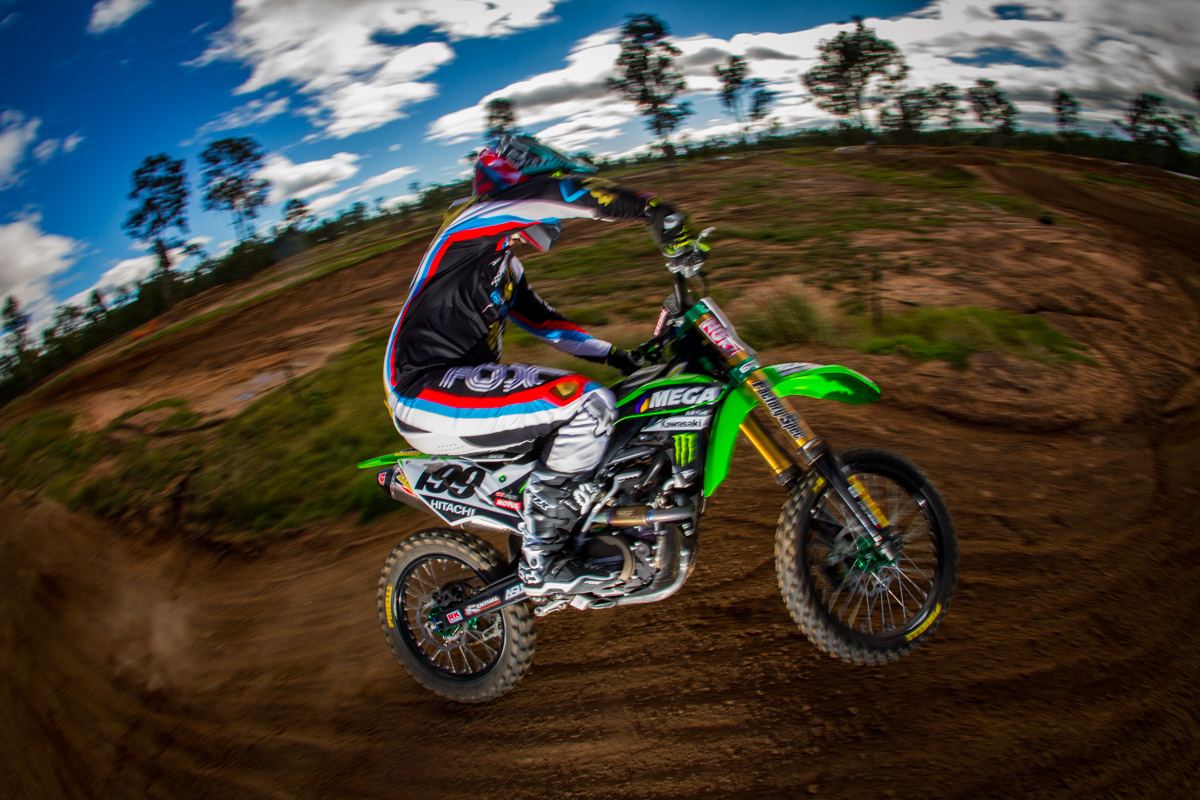 Ride off a turn in second gear and you will stretch your arms, there is power available here that is no joke. A trait I often talk about from race bikes is their potential to over rev and this bike has just that. Right when you expect it to sign off it goes again, a crazy feeling on a 450. I don’t think it is the ideal way to ride a 450 but if you need to hold a gear you can and the bike will still produce power. The pull of the clutch was slightly heavier than standard but not a major issue, most likely due to different springs and clutch internals. This was an exciting bike to ride, anyone but a high level pro would find it an absolute task to hang on to, in the right hands though it’s a beast. 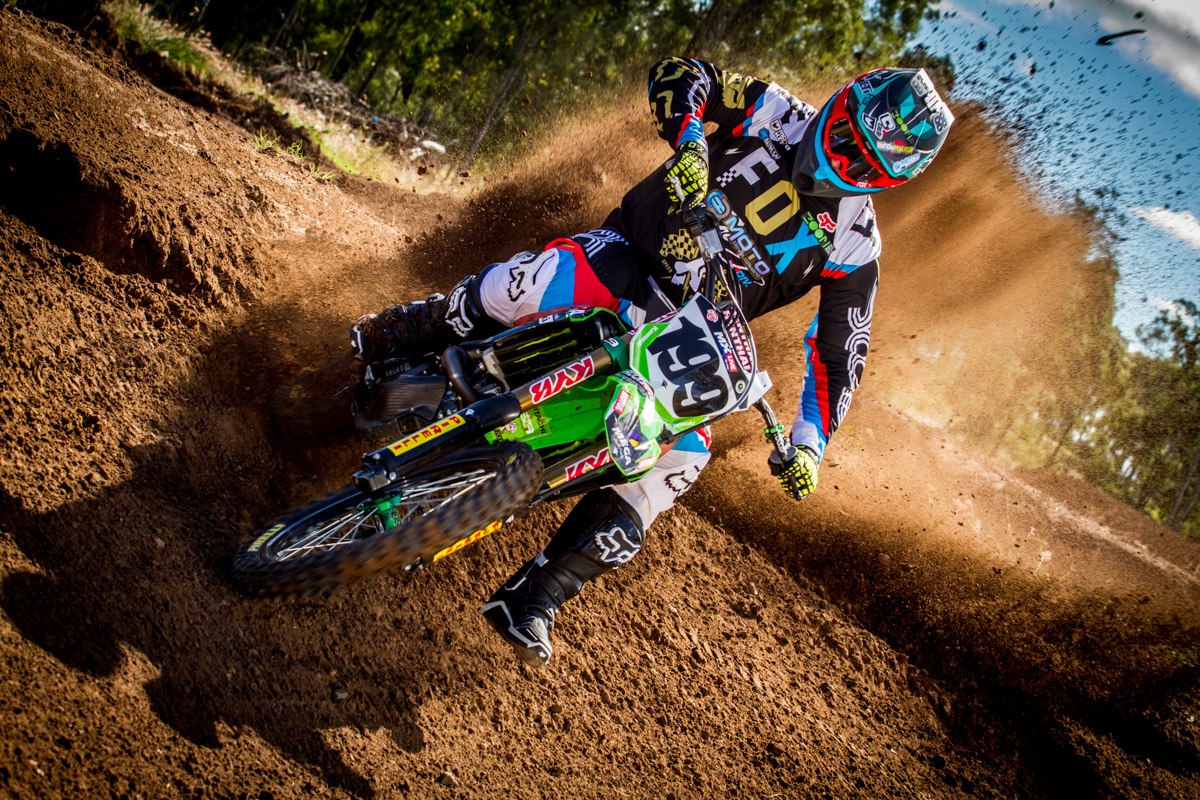 Nathan Crawford has had a long relationship with Factory Spec suspension and that has continued with his move to this team. The suspension setting is a combination of a base setting from the race team and some input from Factory Spec. The bike has KYB Air forks that are A kit spec and the rear shock has the same A kit spec treatment. Tighter tolerances, higher quality bushings and coatings both internally and externally are mostly what makes up the “A kit” reference. At the end of the day all of that is only as good as the suspension is set up for the individual and it seems that Factory Spec and Nato Crawford know how to reach that happy ground. On the track the bike feels nicely balanced, it’s not a low riding rear end like some race bikes I’ve ridden in the past. A very conventional set up which was nice to ride. The setting is firm, exactly what you would expect in a pro level 450 and it gets better the harder you ride it. Of all the race team 450’s I’ve ridden I would say it is towards the firmer end of the scale as far as overall settings go. The balance I mentioned felt great in turns and I could get the bike to sit in a rut easily; and it’s high speed stability was great. Where we rode at Willowbank MX Park, there was one set of big rolling whoops and this is where you notice how well it works on big hits. The harder you hit them the better it felt, staying straight and not reacting to even the hardest of hits; that type of suspension breeds confidence in a rider. 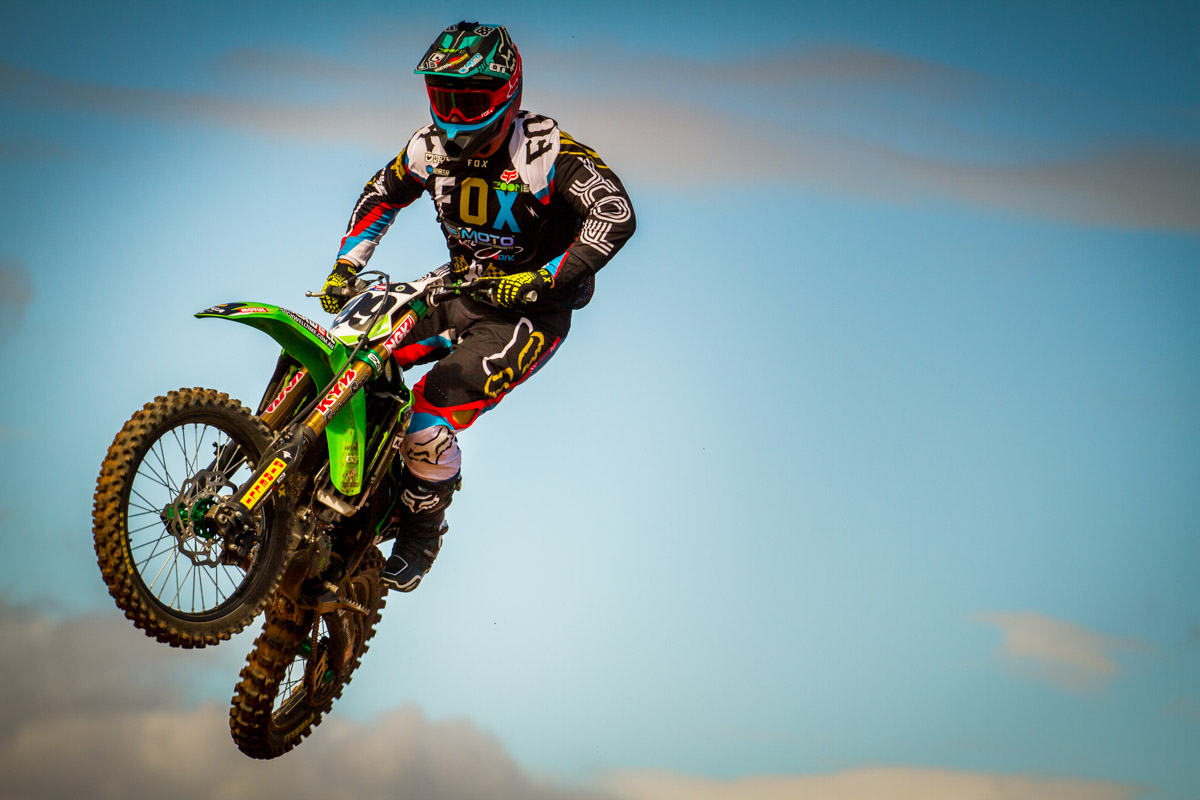 I felt really comfortable on this bike, the KXF has always felt good to me so to ride this one was a blast. There is no mistaking this is a pro’s bike, there is brute power and the suspension setup is firm but that’s what makes it so cool to ride. It doesn’t and shouldn’t feel like your average KX450F because it’s not being ridden by an average rider. This thing is a beast and at the hands of Nato Crawford you’ll most likely see it at the pointy end of the pack more often than not. 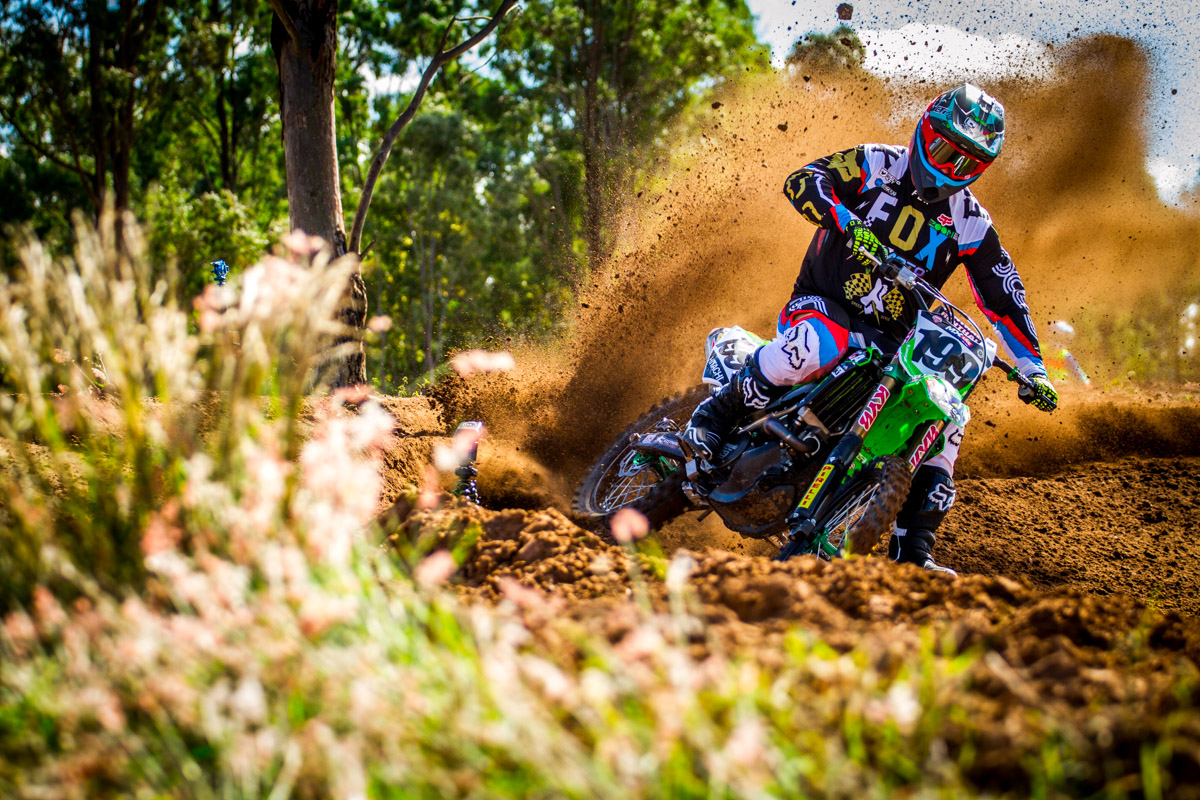 SEE IT IN PRINT!
Check out issue #217 for the full test feature and more images from our test! 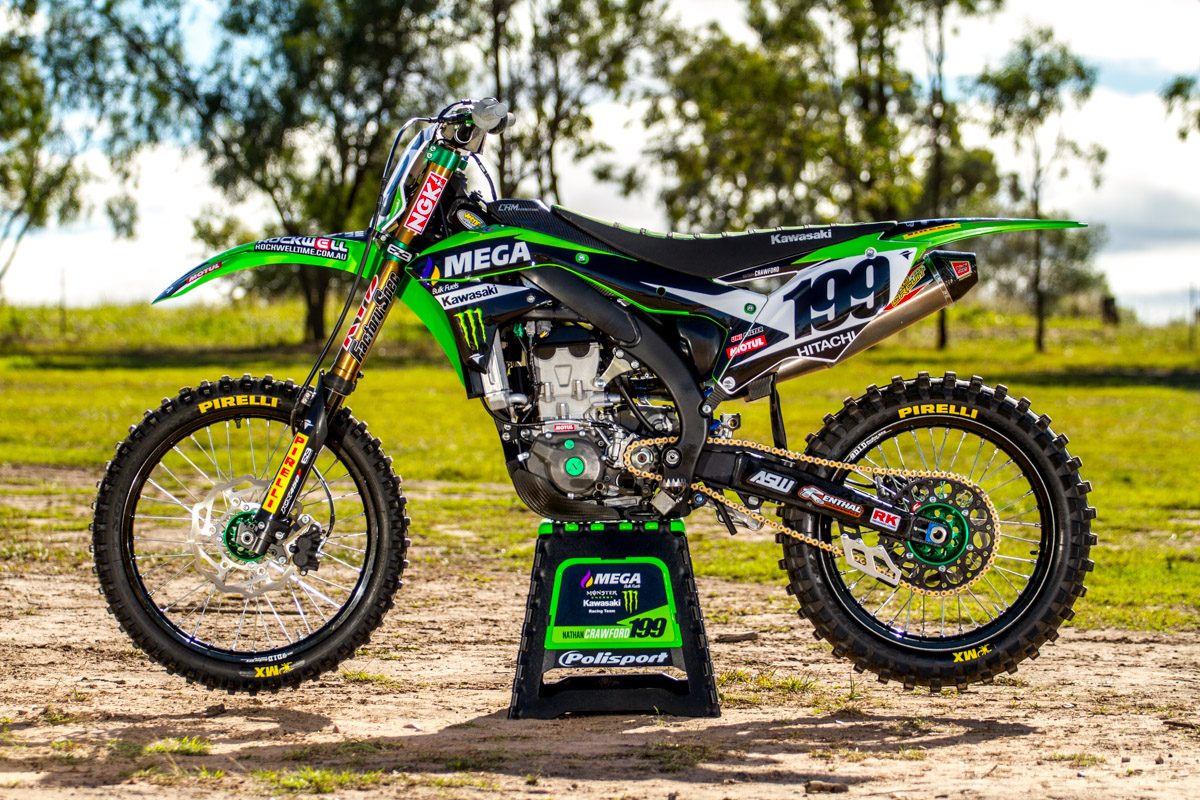