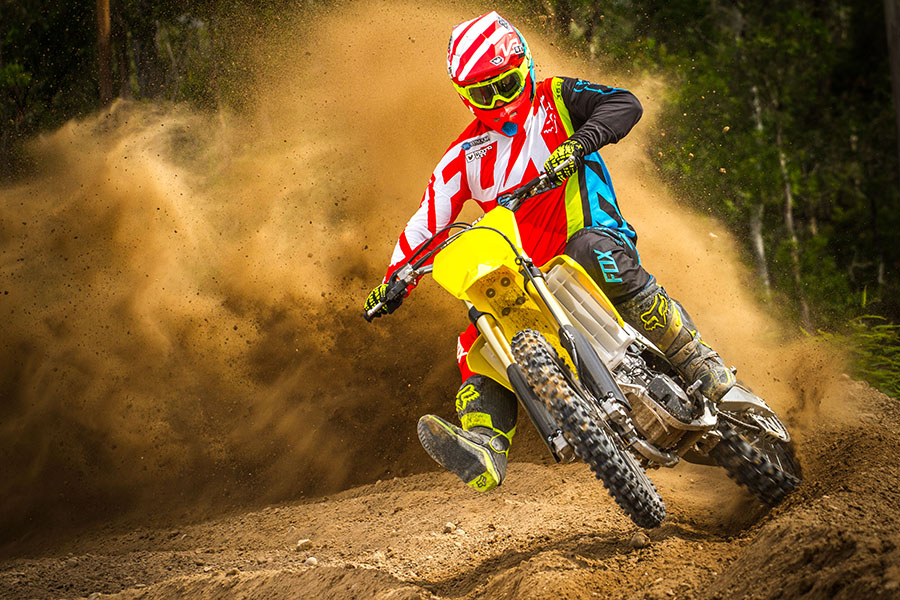 Following the launch of the 2017 RMZ 450, Suzuki was nice enough to leave us with one of the bikes for a couple of months and let us get some more seat time away from the official press event. Here’s what we thought.

While this bike isn’t going to win any outright horsepower contests on the dyno, what it does have is delivered in a way that goes a long way towards making that a moot point. This bike’s power is dished out in a way that more riders would be able to use than if it was just another angry 450. (And haven’t they reached saturation point? It has to be asked, who do they serve?)

It has a strong bottom-to-midrange delivery that makes it feel easy to get off turns and its smooth delivery is all about being able to keep it under control. The top end is solid but it’s not the highlight of the RMZ’s powers — it’s the delivery that the yellow lab coat guys have got right. Suzuki has nailed the power curve and this is one of the easiest 450s to hang onto without feeling mellow or slow and certainly never dull.

Sometimes less is more on a 450 and the way this bike hooks up keeps it competitive in the performance stakes, where the secret to winning is less to do with outright power than with usability

Sometimes less is more on a 450 and the way this bike hooks up keeps it competitive in the performance stakes, where the secret to winning is less to do with outright power than with usability. Couple that with an excellent chassis and suspension package and you have a bike that’s good to go for the average bloke without a mountain of coin flying out of your wallet.

The RMZ also features the coupler system that allows you to select different EFI maps. After trying them all I settled on the lean plug; it added some throttle response and made the bike feel a little livelier, which I liked. 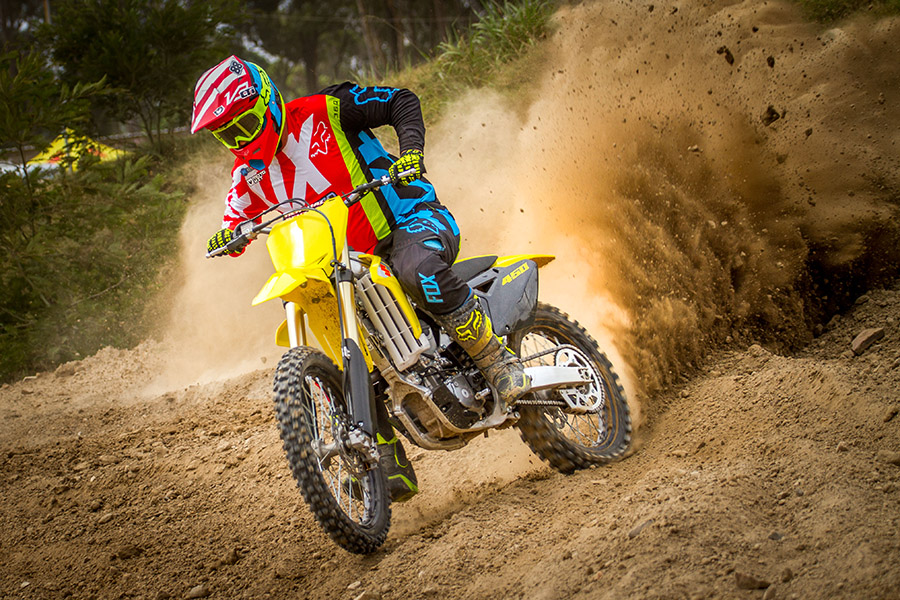 This bike can turn on a dime. The way the RMZ 450 corners inspires confidence and is definitely its strongest handling trait. If feels nimble, as if you can put it where you want in a turn; if you want to switch lines you can and it doesn’t take too much effort. When it comes to higher speeds, it gives up a little stability for that cornering prowess but I can deal with that.

When an update comes along for this bike — and rumours are that it will be in 2018 — let’s hope it keeps the cornering performance it has now. A combination of the smooth power roll on and the shock setting results in solid hook-up off turns, even on hard-pack slick stuff.

BLACK IS THE NEW YELLOW

Suzuki did make an effort to improve the look of this bike for 2017 and I think it did an OK job of it. Black rims will never look bad, so that’s a win in my book.

What Suzuki has here is a bike that in many ways has broader appeal than some others. It’s certainly a 450 well suited to the average rider. Oh yeah, and it’s good enough to win an AMA championship. That’s not a bad spread of talents

Suzuki also added black triple clamps, shock spring and side panels. I like the look of the black side panels; they tie in well with the rest of the bike. But anyone racing a 450 will cover them up in white, which actually changes the look of the bike a bit. Maybe white side panels would have been the go. It definitely looked sweet when Roczen ran with white plates.

All that aside, this is a bike that hasn’t seen a major update in quite some time yet still manages to look very tidy at the track. 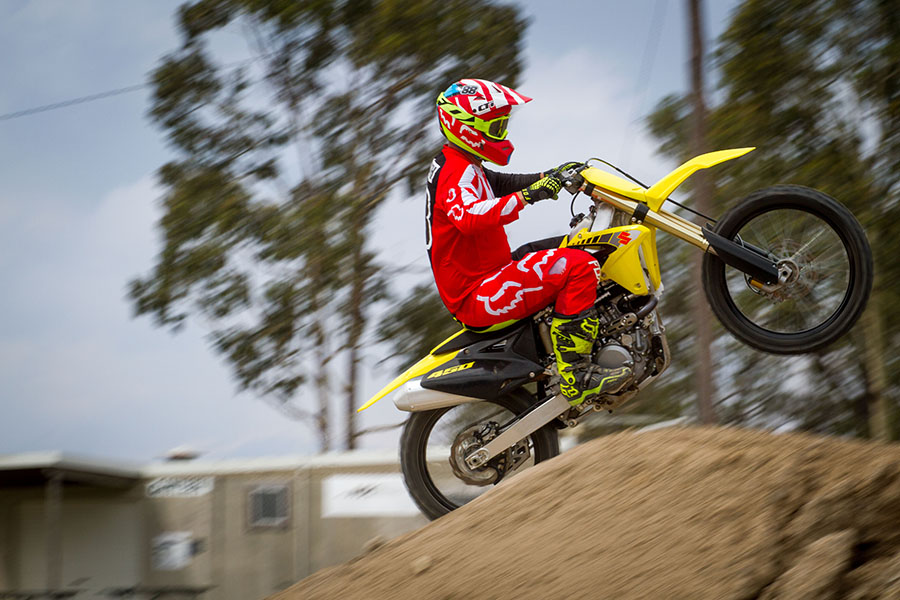 There are plenty of 450 riders who’d enjoy the way this bike delivers its power — as well as the way it gets through a turn. Suzuki has built some of the best-handling motocross bikes of all time and in 2017 it’s clear that its focus hasn’t changed, which is a win for all of us.

To be able to pull a bike out of the crate and carve straightaway isn’t a feat all the competing models can match. What Suzuki has here is a bike that in many ways has broader appeal than some others. It’s certainly a 450 well suited to the average rider. Oh yeah, and it’s good enough to win an AMA championship. That’s not a bad spread of talents.

Keep an eye on the Suzuki Australia website for some of the best package and financing deals, too. This in itself is a super-competitive area and Suzuki is very aggressive and generous in what it offers from time to time. 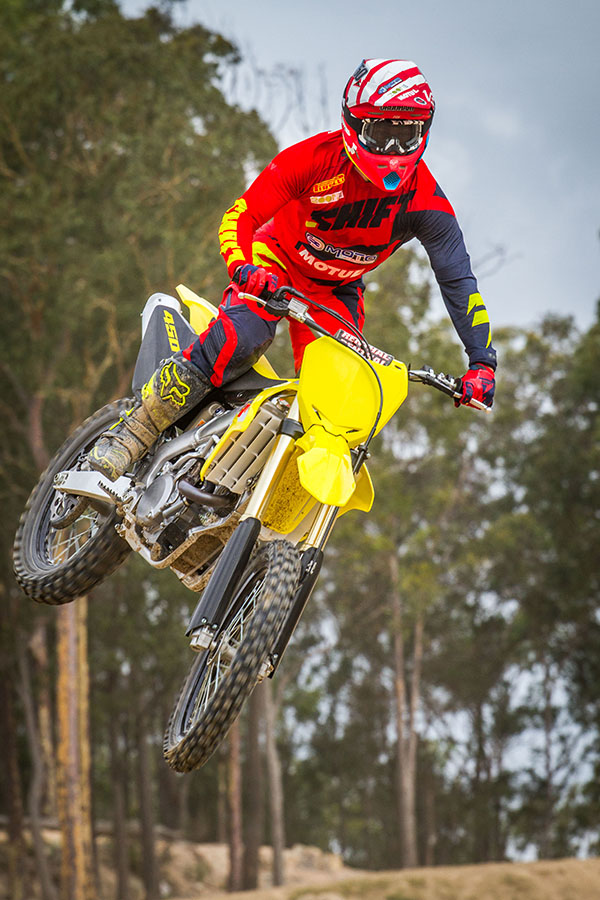 This is a system that does make big changes to the way you can launch the bike off the line, but you do need to spend quite a bit of time practising starts using the different settings on different surfaces to learn what works well where. Do that and you have an extra little weapon in the arsenal on the start line.

A Mode: For hard surfaces or slippery conditions at the starting gate. In this mode, S-HAC alters ignition timing at the moment of launch and the ride over the gate to reduce wheel slip to deliver a smooth takeoff. It also advances ignition timing during this sequence for stronger acceleration. After 1.2 seconds or when you reach third gear, the system shuts off and returns to normal ignition timing.

B Mode: When conditions at the starting gate offer better traction and a more aggressive launch is desired, S-HAC will advance the ignition timing to allow increased throttle response and stronger acceleration off the line. The ignition timing alternation is in a similar sequence as Mode A but with increased overall timing. One of three conditions will return the ignition to normal operation (whichever happens first): (1) after 4.5 seconds have passed since throttle opening; (2) when you shift to fourth gear; (3) when the throttle is closed.

Base Mode: Standard power launch, no action required on the S-HAC switch. 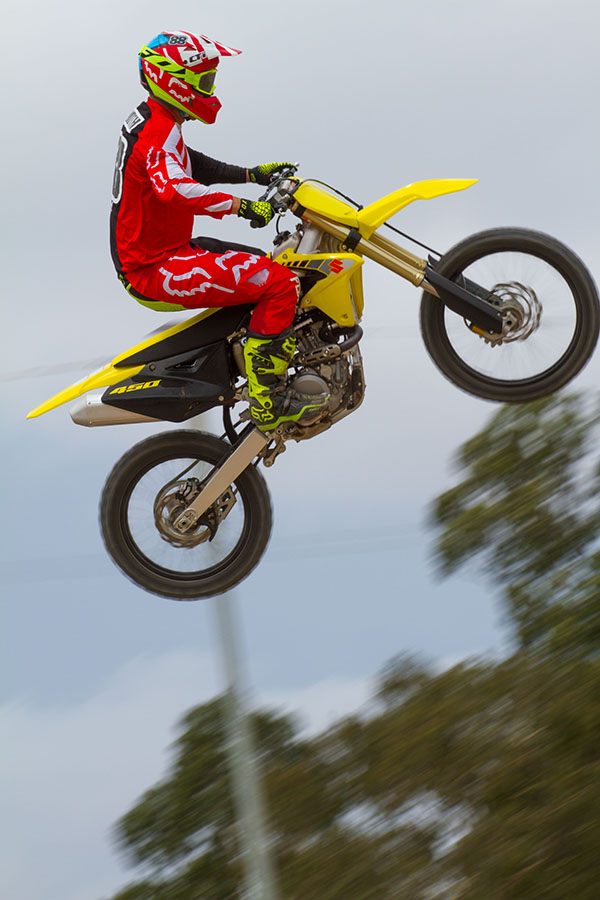