Not too long ago I attended the Australian launch for Ducati’s first true adventure bike, the Multistrada Enduro 1200. The launch was a good experience. The guys from Ducati were obviously enthusiastic about the bike, which is the company’s first proper crack at the off-road market, and they have every right to be. It’s packed with features, has a pedigree that displays quality and reliability and is very much aimed at the upper end of the scale long dominated by BMW.

But the launch ride was short. At about 100km, it was a good ride but, in a positive sign for any bike, I was left wanting more seat time. Ducati was happy for me to take a bike for a good run and I’d wanted to head a certain way for a while (ie, away from the office), so as soon as the window of opportunity opened I made some hasty plans and hit the road.

GO YOUR OWN WAY

Last year I rode from my home in Newcastle (NSW), which is a coal-mining town, and headed to Cobar and Broken Hill-Silverton to see how other mining towns were doing in difficult times. I also got to tour the old Daydream Mine, which was established in 1882, and I recommend that tour to anyone as it blew my mind. Those old miners had it tough beyond explanation. You have to see it for yourself and that whole area is a crucial history lesson for any Aussie.

So I like doing this sort of stuff on a bike. I’m almost always alone (got no friends) and just checking things out a long way from home. I’ve travelled a lot overseas but I never get enough of seeing different parts of Australia so, in keeping with my mining theme of the last ride, I thought I’d head out to Lightning Ridge to see what opal mining is all about. On the way there I planned to go through the Pilliga and then after a couple of days at Lightning Ridge head to Bourke via Talawanta and then home again.

My first challenge was to navigate the ride. I planned it out on Google Maps but I had no idea how to take that info and export it to my Magellan GPS. This became a war between me, my laptop and the GPS. I know there are plenty of people with boundless knowledge on this topic but I’m not one of them so I was figuring it out as I went. And, believe me, it went slowly and it nearly sent me mad given I ended up plotting the entire ride turn-for-turn manually (about 2000km) in some dodgy piece of software. I wasn’t even sure if what I’d done worked so I packed my maps in the event I needed to just do it the old-school way. I’m just friggin’ hopeless at stuff like this but I learned one thing: next time I’ll ask someone else to do it for me in exchange for beer.

Ducati fitted the bike with the sweet panniers designed by Touratech and I filled them with some clothes and camera gear then strapped my tripod to the rear rack and I was good to go. I left my street at 4:30am and headed towards the Coonabarabran and then on to the Pilliga. 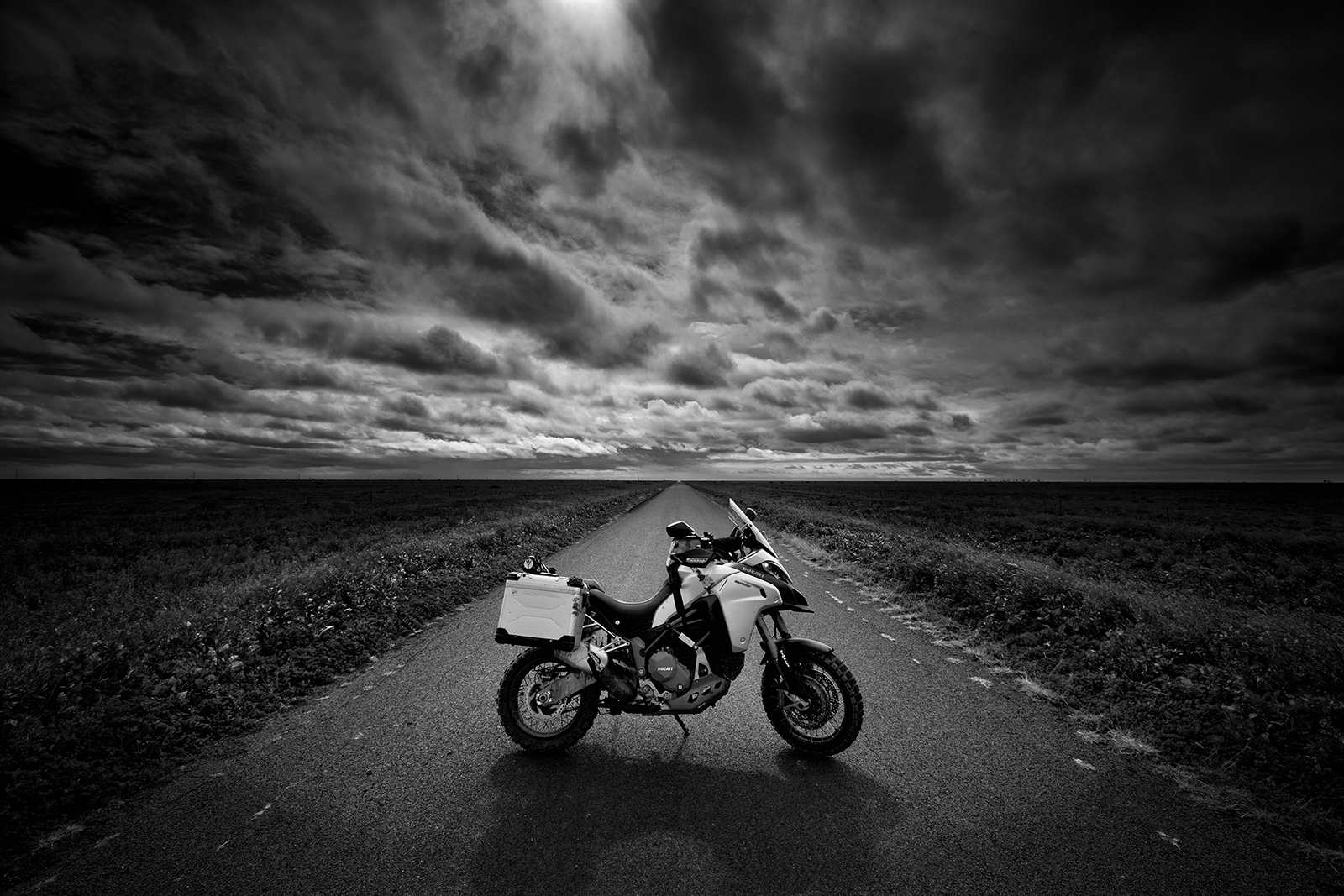 The Pilliga is an interesting place. There’s a hell of a lot of scrub there — and there’s one more thing. Before I left I Googled “The Pilliga” and most of what came up on the screen was about the Yowie. Apparently the Pilliga National Park is the home of the Yowie, the Australian Bigfoot. It’s easy to laugh at this sort of thing until you get a look at how thick the scrub is and realise there could be anything in there and if it doesn’t want to be found it probably won’t be.

This is where I got onto the dirt for the first time and breathed a sigh of relief. I hate riding on the road because I find it about as boring as the instructions to a slow cooker. This was also the first time I could put the bike into Enduro mode and have some fun. The sandy roads are pretty good but got pretty slippery in the turns as I skirted around Narrabri, watching for kangaroos and sending clouds of light dust into the air behind me.

The Ducati has cruise control and from the moment I got back on the tar I pretty much set it and kept going till I reached the right-hand bend off the Castlereagh Highway and into Lightning Ridge.

This is where I discovered my clutch reservoir was totally empty. I managed to mash down through the gears and came to a stop at the “Welcome” sign. There wasn’t much point sitting there so I got going again, made it into town and pulled up at a servo with a clunk, having to just stall it to stop. A couple of legendary locals stopped for a chat while I was trying to sort things out and told me the only motorcycle mechanic had left town a while ago. I enquired at the servo as to whether they had any hose so I could bleed and refill the clutch — and of course they said no. Why do we bother calling them service stations any more?

There was pretty much no fluid left in the system so I pushed the big unit up the main street to my hotel where the owner offered me a beer or rum. The couple who ran the hotel were the best type of people you can meet while you’re travelling. They knew all about the region and would do anything to help or at least bring a laugh to the situation.

That night I finally got the clutch sorted the super-old-school way, which was a relief, but I still didn’t know where the fluid had gone. More on that later. 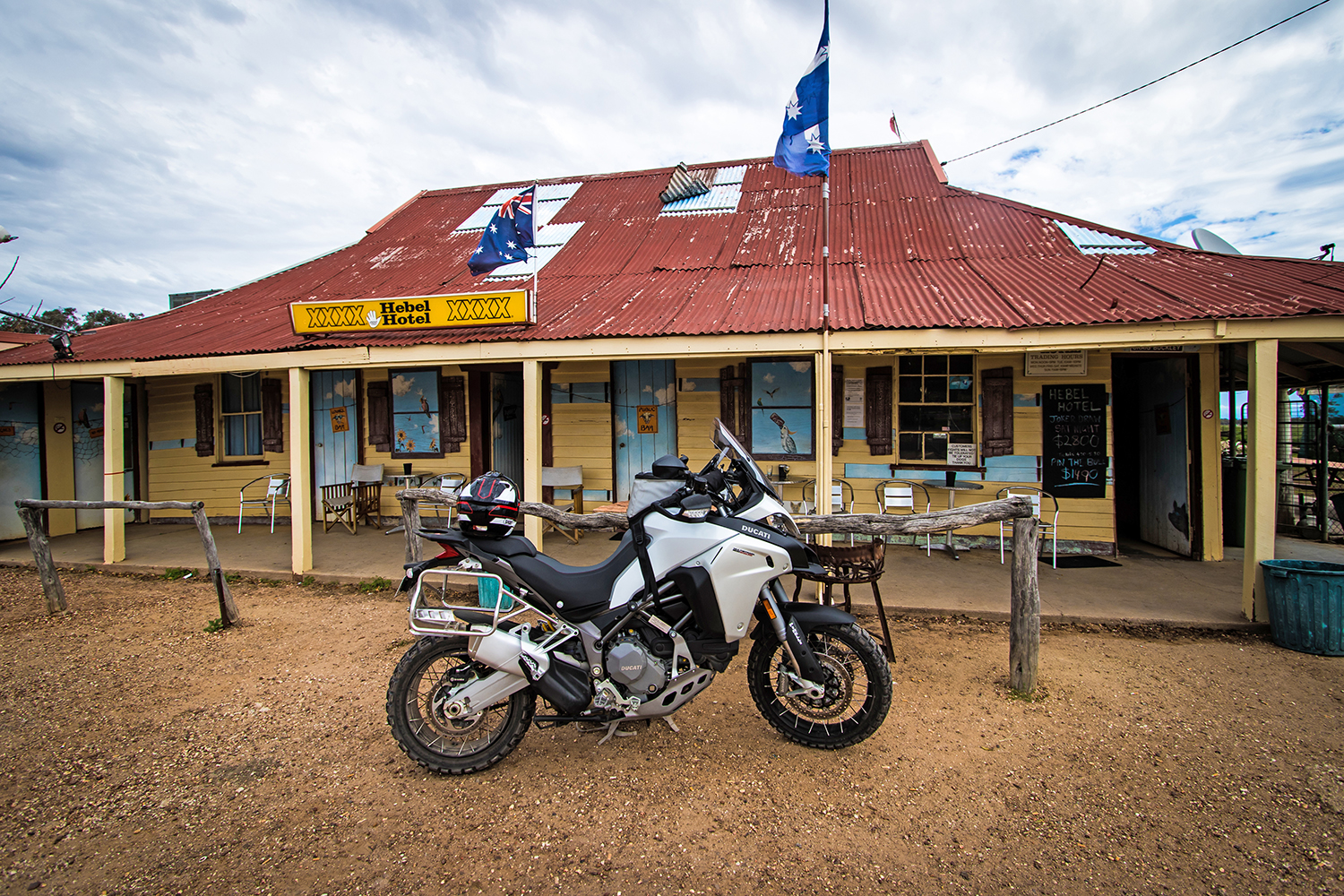 Lightning Ridge isn’t a big place — there are pretty much just two main streets — but it’s a pretty busy town. I don’t usually do touristy stuff but I followed the two “car door” tours of the town in which you follow the arrows painted on specifically coloured car doors. I did the red and the yellow tours and got to see how opals are mined. Opals are the backbone of Lightning Ridge, which I’m told has the world’s richest deposits of black opals in the world, among other gemstones.

I spoke to a local woman about how the mining works and she told me that you buy a plot, which used to be rectangular but is now round, you peg it out and then you dig down maybe 120 metres and fan out within your plot’s boundaries to find your treasure. It looks like bloody hard work and the mines are all contained in various zones that look a bit like shantytowns with busted caravans, ancient trucks and mining equipment both new and weathered from decades in the unforgiving weather.

There’s a lot of art on display around the town and that’s something I also found in Broken Hill and certainly Silverton and a lot of country towns.

I found people would come up and have a chat almost every time I stopped. I spoke to a couple from Nowra who had bikes at home and had plenty of questions about the Ducati. Soon enough, another couple wandered over and wanted to know about the bike, too.

Now, there was a time when I’d sense an old couple were up for a chat and I’d leave as fast as I could. I had no interest in talking about Kochie or mushy peas and that’s all old folks do, right? Then one afternoon in a pub in Bright I helped a couple of slightly confused blokes who must have been 80 order a beer taster selection. I sat with them for a while and they told me war stories that I feel the beer helped loosen out of them.

I realised then that these two blokes who were travelling with their wives in caravans and who I would curse if I had to sit behind on the road and ridicule for … well, just being old, I guess, were in fact absolute legends who’ve seen more and done more than I ever will. They’ve laid it all on the line and then they worked and raised families and I couldn’t get enough of their stories. I had this in mind in Lightning Ridge while I listened to more stories of travel and what some of my favourite places like Alice Springs and Broken Hill looked like 30 years ago when they first went through there.