What you see here is a 2018 Kawasaki KX125. Say what? Kawasaki stopped building the KX125 in 2008, however Jay Cox has crafted this work of art into what is essentially a current model 2018 KX two-stroke. 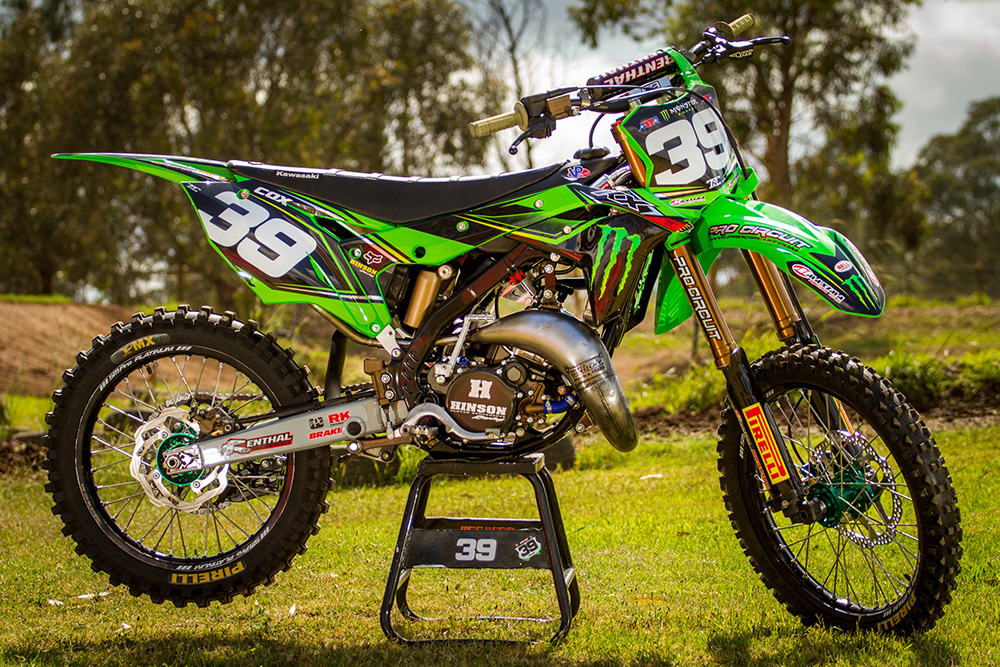 From a distance, this bike is impressive. However, up close you are stopped in your tracks. The intricate details that Jay has perfected on this bike is amazing.  “This bike started as a the 2008 KX125, the last model which Kawasaki built. I bought it with the upgraded 2012 SFF forks and brakes front and rear, other than that and a pipe, it was pretty stock.” Spoke Jay as we wandered around his bike.
“I then gave it a complete strip down and rebuild. That was when everything changed. I saw Pro Circuit mechanic Jon Primo had built a KX125 which looks like this one does now. And I had also seen one the guy who designed this kit in New Zealand has built. I started talking to both the guys and began my research, a shit load of research!” 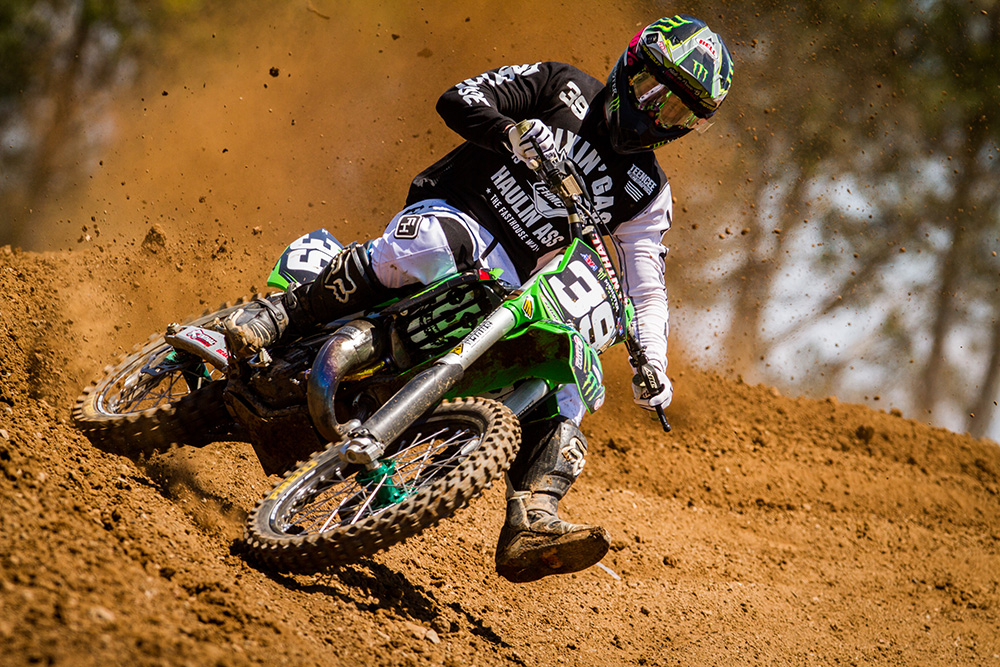 Being only one of about five bikes currently built in the world, the research led Jay to securing one of the KX conversion kits.
“I was able to get my hands on one of the kits. I think there was about 30 made in total and I think there’s only about 5 of these in the world in the moment. It involves a complete 2018 KX250F subframe, seat, fuel tank, airbox and plastics kit. The tank itself needs to be moulded to fit inside the 125 frame. – there’s a bit of work in that. Everything bolts up perfect, everything sits and fits like a genuine 2018 Kawasaki.” 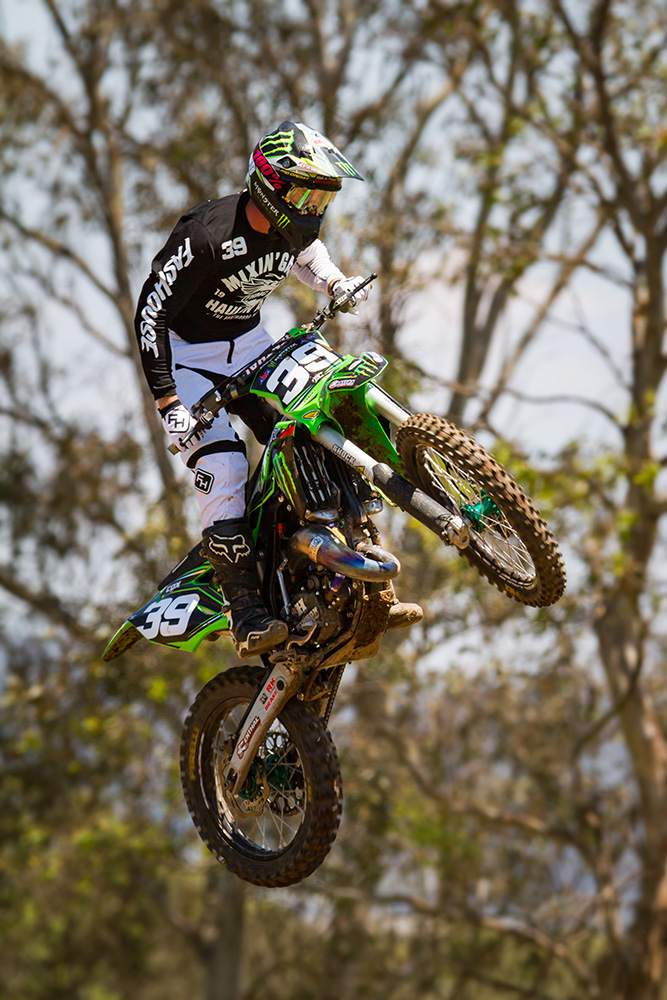 PERFORMANCE
The engine is far from stock. Jay knows his way around a motocross and supercross track, and wanted to ride his KX125, not just polish it in his shed. What he has built would be close to a factory KX 10 years ago.
“It has an isotropic super finishing coated gearbox. I did that as they are pretty much bulletproof, I didn’t want to be going and replacing a gearbox on the bike, it also reduces friction and offer longevity to the parts. The Cerakoted engine cases and crank cases are done in grey, to match with the Hinson clutch cover. It has a V Force Reed block, the barrel has been ported and polished. It has a Bud Racing head which has been squished to 1mm clearance. The engine is finished off with a full Pro Circuit exhaust – I also have a jet-less electro carb coming.
“The shock is a standard 2008 shock. It’s too much modifying to fit a current shock, so I kept the 08 shock had it ti-nitrate and Kashima coated as well as a revalved to suit me.  Up front are the 2012 SFF 47mm forks, and triple clamps to suit. The clamps are EZE clamps, I had those Kashima coated which is purely decorative. I just wanted to do something nobody else had. Being that I have fitted the updated front-end, I have been able to fit a 280mm front disc rotor, the brakes also have braided lines front and rear. 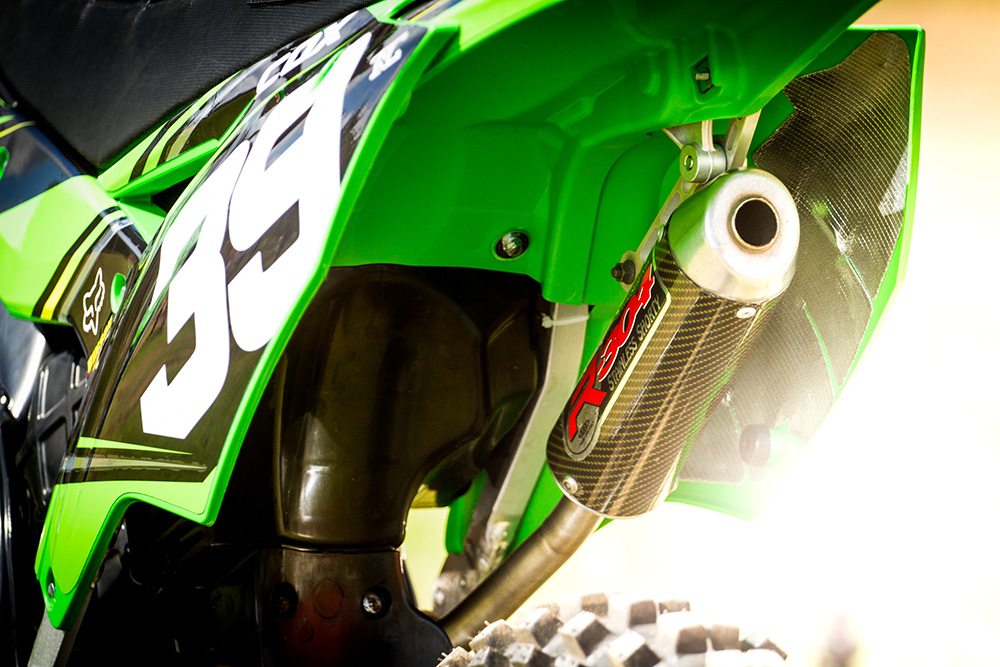 NOT JUST A SHOW BIKE
With our shots finished Jay throw on his very fitting, Fasthouse “Mixin Gas, Haulin Ass”, jersey and clicked her into gear for the maiden voyage. After a few laps the #39 KX125 was screaming around the Appin circuit. This bike is an incredible bit of gear and a bucket-load of time and research has gone into it. The cost? Well, not as much as you might think. This has been a long and tireless project for Jay who has spent a long time researching parts and purchasing them when opportunities arose. It would be east to expect this bike to owe him over $20,000, but the figure is about half that according to Jay. Who acknowledged it would be easy to hit that $20k mark without the research and time online searching for parts and deals around the world. We take our hat off to you Jay, this bike is wicked.