The 2018 Honda CRF450R isn’t just a ’17 with a button. Honda has refined the package well to produce a bike that will serve all skill sets

Honda dropped an all new CRF450R on the planet in 2017 which was received well and you could’ve forgiven them if they left it well alone for 2018. But here we are a year on and the 2018 CRF450R has received some decent changes that seem to have flown a little under the radar. The ’18 is not, as many seem to think, just a ’17 with electric start. While they didn’t make massive or numerous changes Honda did tweak quite a bit and the changes have been worthwhile.

The 2018 is all about acceleration and getting the power to the ground. Out of a corner the CRF is a beast and this is such a huge asset, particularly in supercross. There are no glaring holes in the power from the mid to the top and the revised engine mapping really pays-off in offering a super smooth power curve on a bike that’s happy to rev hard. The power delivery is better than that of the 2017 model and while it may require a little clutch work right off the bottom where it’s not as aggressive as the ’17 but the climb into the brilliant and robust mid-range makes it all worthwhile.

Gear changes are positive and smooth and the dual exhaust is incredibly quiet too which we whole heartedly applaud.

We rode on a pretty dusty track that had received some rain overnight but not enough to quench its thirst. Overall we preferred the Standard map of the three available (Mellow, Standard and Aggressive), but it is damn handy to have all three on call on the fly. What would be even better is a situation where you could load your own maps in as easily as can be done with the Yamaha, and then switch from one to the other via the bar switch. What manufacturers worry about here is that people will get lost in the endless settings and screw-up their own ride enjoyment and that’s a valid concern given suspension clickers are confusing enough for plenty of riders. 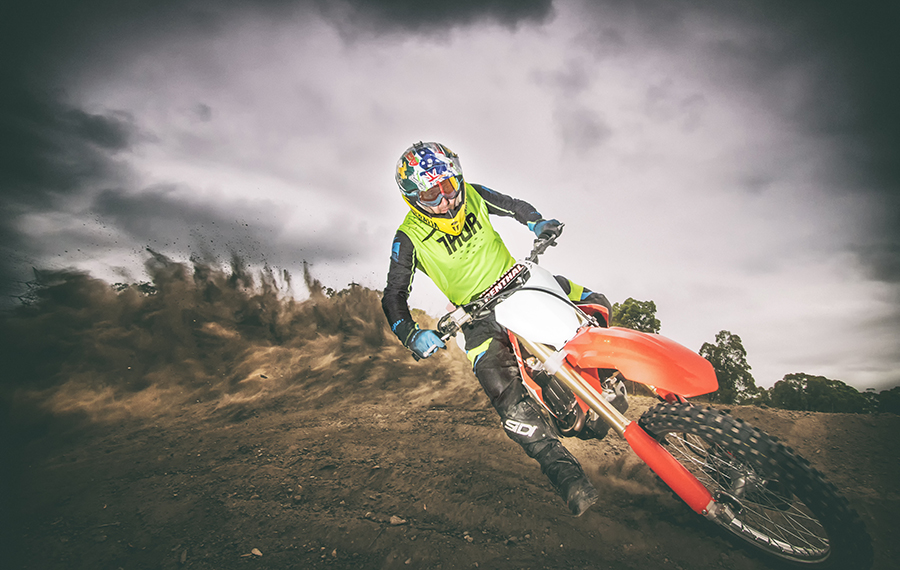 Obviously a big change for this year is the loss of the kickstarter and the inclusion of electric start as standard equipment. Along with the lithium-iron phosphate battery this gives the bike a significant weight saving and leaves just Suzuki and Kawasaki with 2018 450s that don’t have electric start. Is it a deal breaker? No – but it is good and tough to say goodbye to once you have it.

‘ROUND THE CORNER
The handling is improved on the 2017 but not by a hell of a lot. We’d prefer a slower rebound and higher rear than the stock settings, but there’s a trade-off happening here. The CRF squats nicely out of corners and hooks up so you get maximum drive. However if there’s a jump or lip just after that corner you’ll feel the rear kick as it unloads. This is us riding a very new and completely stock bike and it wouldn’t be a tough issue to solve but we wouldn’t want to lose that amazing drive. If you wind the power-on hard on say, a YZ450F, you will have to fight to keep the rear in check and this goes for pretty much every one of the current 450s. You’re just dumping so much power down these days that the rear will wander and look to step out. Not so with the CRF, which holds the initial line and hooks up without getting squirrely. A few years ago this would’ve been put down in part to less power but the new engine has plenty of ponies and this is all about chassis and suspension. One important note here though is that we weren’t a fan of the Dunlop MX3S tyres. We just couldn’t get comfortable with them on a track we’ve done endless amounts of laps on and in particular found the front pushed in places we didn’t expect. 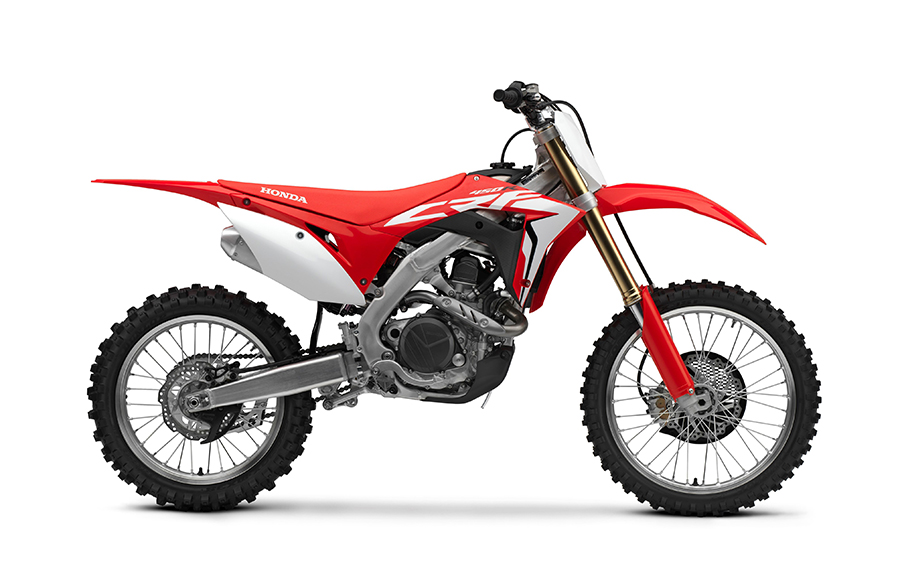 The 2018 has stiffer suspension than the 2017 and it needed to be, but we’d make the forks harder still and with a bit more time on the bike we think we may also go a stiffer shock spring with valving to match.

BIKE FOR ALL TYPES
The 2018 CRF450R feels like a bike that’s come a long way and learnt a lot as it travelled. It’s slim, nimble and powerful but not difficult to keep in check. It’s heavy-ish compared to the competition but we’d take the weight gain for the advantage of the electric start and to be honest it’s barely noticeable.
The Honda shines in the way it gets its substantial power to the ground and that epic mid-range that when pout together make it a tough bike to beat exiting a corner which is a point where any advantage is fought after.
The RRP of $11,999 is marginally less than much of the competition and for the average rider there’s very little that needs to be done for this to be a competitive ride that’s not as hard to manhandle as some. There’s no doubt that at the highest level the Honda can be a threat as we’ve seen with the way Roczen and Sealy have been riding but more important to us the way the same bike can work for a C Grade rider as well as a champ. It’s a tough ask but the Honda is up to the task.