The Little Monster: Yamaha brings the Japanese back into the quarter-litre enduro market with its best 250F for more than a decade. But can it take down the dominant Euros?

Forget the WR250F that has graced our presence since 2007. It is dead. It is a relic of the past. It earned its stripes and served extraordinarily well. But the new bike is so much better.

The 2015 WR250F has little in common with its predecessor except that it’s blue and has Yamaha WR250F written on it.

We attended a launch of the new WR-F at Coffs Harbour, which turned out to be the first launch ride for the bike anywhere in the world. The WR250F is very much an Australian project, driven by Yamaha Australia brand manager, Peter Payne, with the assistance of none other than Kiwi motocross legend Josh Coppins, so it’s only fitting Aussies get the first chance to get the bike dirty. In fact, cast your mind back to the WR250F’s initial launch in 2001 and we have Geoff Ballard, Peter Payne and Yamaha Australia’s head honcho, Steve Cotterell, to thank for the development of that iconic model. So the WR250F’s Aussie heritage is real. 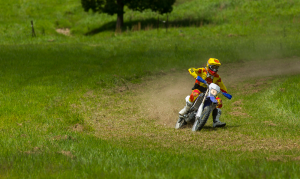 From MX to Enduro
The 2015 WR250F is essentially a YZ250F with as little done as possible to make it off-road ready so that it retains its aggressive edge. And that job has been done well.

The frame is YZ-F with a couple of different engine mounts. The engine is YZ-F with a slanted cylinder and wrap-around exhaust. In fact, it’s easier to list the components that aren’t from the YZ250F, which happens to be one of the best balanced and sharpest-turning bikes on the market and went all the way to winning our 250F motocross shootout last year.

Some important differences include using the previous-model-WR-F’s rear brake calliper and brake disc while retaining the YZ-F master cylinder. The reason for this is that the WR-F’s was able to stand up to sustained braking such on long downhills better than the YZ-F’s. The front brake is straight off the previous-model WR-F.

The engine oil level is 200mls greater than the YZ-F’s and while the radiators are the same, the WR-F now has a thermo-fan attached.

There is, of course, a six-speed gearbox, for which we are eternally grateful, and the bike runs a new clutch that has an easy action. The generator is straight off the 450 so there’s no shortage of available electrical power with 14V and 160W at the ready. The seat is from the YZ-F, which is OK for the first two to three hours but a bit hard from then on, and there’s an unfortunate opening just behind the shock reservoir that leaves the fuse mounts and a bit of wiring exposed. That’s a little too susceptible to a stray branch infiltrating and ripping into it for my liking. A simple mesh guard (like the MX team runs) would be an early mod for me and hopefully one will be made available. The shroud assembly also seems overly complicated and if it takes a knock on either side that puts it out of shape, it looks as though it would upset the whole piece fitting properly again.

The four-way adjustable bar clamps are a nice touch, as are the excellent footpegs and brake and gear levers. The rear brake cover and bashplate are reasonable but there will be far better options as more genuine and aftermarket parts become available. 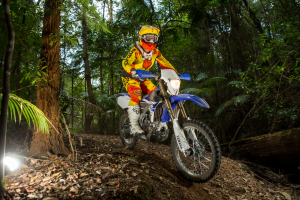 Amongst the Muck
Our launch ride was under the guidance of the Detour boys and they really know how to put a ride on. If you’re after a ride with a heap of variety and some awesome tracks, then hit up Detour and head to Coffs Harbour for a ride you won’t forget.

We left from the Big Banana (of course) and headed into the hills early on the Monday morning. My initial feel from the bike was that it was extremely stiff, probably due to the fact that my bike only had 22km on it so the suspension was yet to bed in and that the chassis isn’t built for a great deal of flex. I made some adjustments to the clickers, which made it worse. That’s because the rebound is on the bottom of the fork now with compression at the top and I went and changed it like it was the old forks where the rebound was at the top. Once I had that pointed out by someone with a higher IQ, I was able to find a happy place and as the bike started to settle in, the real feel of the WR-F started to shine through. Particularly on the amazing and super-fast grass track loop we hit. The bike was stable at speed, which, for a fast-turning bike like this, was a bit of a surprise. You kind of expect some give and take but so far, it had handled every situation well and as we put more and more hours on the trails, the bike got better and better.

The engine is fuel injected, which also brings into play the Yamaha Power Tuner. The Power Tuner is a brilliant tool and the best tuning instrument offered by any manufacturer. In my opinion, it’s of more use on the 250F than the WR450F and so the WR-F not only gets a new engine but one that can be manipulated and moulded in countless ways. Better than re-jetting, right?

The engine is fast revving and fairly aggressive with a nice mid-range punch. It’s a fun engine that’s so far beyond the old mill that it’s like comparing a Viking row boat with a Concorde. It’ll lift the front nicely at pace and pick through single trail as easily as it tears up open tracks. It loves to rev and while it feels less torquey than the KTM engine, it’s also arguably more exciting in the way it spools up so fast, but we’ll have to do a side-by-side comparison before we go too deep into that. We did have a bike fitted with a GYTR exhaust and a different engine map and it felt like it had much more torque and was able to hold gears longer. It was happy to sit in third through single trail where the stocker would prefer second with the occasional up-shift. I preferred the GYTR set-up and would recommend going that way as it covers the only slight gripe I could come up with for the engine, while running less revs and managing traction easier.

The suspension is so much better than the awful stuff that was on the previous model. It’s a comparison that’s laughable in that there is no comparison. The shock runs a spring rated for a rider about 75kg, which I have long since passed due to my love of Red Bull and Pringles. That said, I never thought the rear was a problem. Over logs and in ruts and downhills, it stays planted and tracks predictably. The fork rewards riding were you push it rather than just plodding along and, while I found it deflected at times in really rocky conditions, it does handle a huge variety of terrain and obstacles really well. And to be honest, the magic of this bike lies in its chassis and suspension package and the precise handling it delivers. 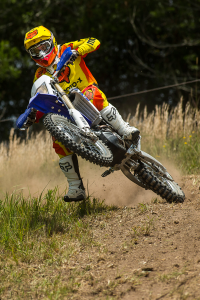 So You Want to be a Champion?
The 250F market is depressed. Aussies don’t seem to be interested anymore and, as I’ve said before, that’s a shame because the best 250s ever built are on the market right now. And this is one of them. The average bloke would ride faster for longer on the WR250F than he would on the WR450F. The WR250F is a better bike than the 450 is. Don’t be hypnotised by CCs.

The WR250F is a superb bike that will suit a wide variety of riders. It’s light and responsive and is built for fun. Racers will win on it but the rest of us will just have a heap of fun on it. And that, my friends, is why we are all here. 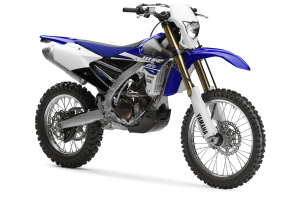