In 2007–08, Honda and the CRF450R were kings of the jungle. In fact, many people still believe the 2008-model CRF450R, the last before fuel injection, was one of the best production bikes built. The 2009 was an all-new machine and met with a lukewarm reception around the world. It was good, but not the knockout blow Honda riders were hoping for.

As the development process moved forward, so did the Honda CRF 450, until 2012 when it was again seen as one of the better bikes in the 450 market. That brings us to 2013, when Honda again updated a large part of its 450. Motor, chassis and suspension all received major updates, the introduction of the new air fork seen as the most topical. So now Honda lovers are hoping that, again, the development cycle can kick in and the bike improve each and every year. 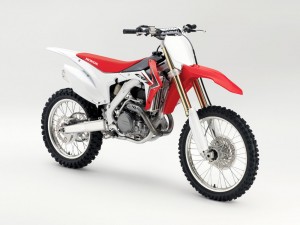 The motor and the fork received the majority of attention for 2014. New cylinder head porting, new dual–timing fuel injection and a new muffler see out the motor updates while the fork gets new internal spec changes.

I’ve always been a big fan of the Honda fit and feel. I like the shape of the levers, the pull ratio on the clutch perch, the hardness of the seat foam and the thinness of the bike.

But, having said all that, the Honda ergo layout is starting to get a little tight and dated. In a bid to get the cockpit as compact as possible, things are getting snug in there and taller riders look massive on the CRF. It has also has a slight “sit-in” feel. Compared to the Kato, Honda could look at making the layout a little flatter across the seat and tank.

The brakes aren’t bad but certainly not class leading as all the Japanese bikes have very similar brake performance.

Honda Australia imports and distributes the European-spec version of the CRF450R, not the US version. The difference between the two is mainly the exhaust and also the airbox, both which have significant effect on motor performance. The exhaust note on the bikes used in Australia is so quiet you could ride it in a library and not get noticed. Combine that with a choked-up airbox and you have a motor screaming for air and not living up to its full potential.

The bike has a soft, almost gentle-natured motor. It comes on mildly, battles away through a solid midrange and then just can’t quiet unleash in the top end. Most testers said they used a bit of clutch to snap the donk into life on the exit of turns and that clutch abuse did result in some play at the lever. A stronger bottom end would help riders lay off the clutch. As a racer, you listen for an exhaust note to signify when the bike is really up and humming but, with the choked-up exhaust and airbox, you never really get the sound you’re after.

But it is deceptive. As a group we did a number of starts on a long uphill drag and the Honda was always competitive and certainly not left behind. It’s far and away the easiest 450 motor of the group to use and no doubt a perfect fit for a rider looking to make the step up to a 450 or the guy who just doesn’t have the time to train as often as he’d like, as mastering this motor is less physical than with some of the fire breathers in the class.

Honda must be commended on the quietness of the bike. But for racing, the exhaust is the first thing I’d look at to improve the power. The motor has plenty of potential and, by getting a good exhaust, opening up the airbox and maybe some gearing and ignition mapping, it isn’t too hard to change your Clark Kent CRF into a Superman. Or pretty close to it.

Honda has engineered a very little motorcycle and this has always been one of their strengths. Not only does it feel light in motion, it actually is, and that has a big effect on the energy required to manhandle it around the track. Every manufacture targets weight and Honda has always done a great job on keeping the weight down on the CRF450R.

The overall feel of the bike on the track is much in line with the motor. Soft, gentle and forgiving were the words most frequently used to describe the bike’s handling. There’s no doubt the frame has plenty of give in it and, combined with its light weight and plush suspension, it does have a way of massaging its way around the track.

The fork was a bone of contention in 2013 and the 2014 model has some changes. The air fork now comes with 35psi standard as compared to last year’s 33psi. This is closer to what the majority of racers used on their bikes in 2013 and offers a better ride up front. Honda riders need to be aware that a 2psi change is equivalent to a spring rate change. There have also been some internal changes and the fork this year does feel a lot better than the one supplied 12 months ago. It has some plushness at the top and a fluid, although softish, stroke.

The shock has a similar ride: again, on the soft side when pushed hard but very tractable and predictable on braking and acceleration bumps. During our testing, ride heights were set between 100 and 104mm for best results and most riders found a setting to their liking.

Honda has produced a solid, workable motocross bike, far and away the most manageable and easiest-to-use 450cc motocross bike of the 2014 fleet. It doesn’t have any hard edges or anger management issues; it’s a gentle, friendly motocross bike with enough power on tap to get you from A to B but a heap more if you go looking for it.

The design concept of the bike carries right the way through and if an aggressive, arm-stretching race bike isn’t what you’re chasing, the CRF is right up your alley. It still offers 450cc worth of joy — just in a pleasant and easy-to-use fashion.

The bike felt really small to me. The chassis felt compliant, which gave a smooth feel. The engine felt really restricted, which I think comes from the standard airbox and pipe. It’s a really good entry-level 450 straight off the showroom floor.

The Honda is a bit of a sleeper among this group of bikes. It seems a little restricted in both the air intake and the exhaust, which really takes the edge off. It doesn’t feel as hard hitting as any of the other bikes but that is very deceiving. This bike won’t tear your arms out but I would bet my house that many riders would be faster with this type of power delivery. The bike’s handling is very forgiving and gives you a confident feel, doing everything well. The ergos of the Honda are almost a little too slim, giving the bike a small feel for me. A few mods to open up the CRF’s lungs and you’ll have yourself a different bike but off the shelf, stacked up with the others, it’s just off the mark.

The front end on the Honda CRF450R feels much improved in standard form over the 2013 model. In the last model I felt it blew through the stroke too easily with the amount of air pressure required to give a plush feel. This model however holds up well and offers a positive feel in the front end. The engine on the Honda lets it down. The bike feels like it’s choked up and begging to be revved. The power is there; it just needs to be unearthed. The bike is thin around the legs and I wouldn’t want any less to hang onto with the knees. Although the bike hasn’t changed aesthetically this year, I’m still a fan of its edgy lines and modern look.

The power didn’t blow my wig back but the handling, controls and seating position had a comfortable and familiar feel. In comparison to the other bikes, it didn’t seem to possess that aggressive MX attitude one would expect from a bike in this class. This could be a good or bad thing, depending on how you look at it.