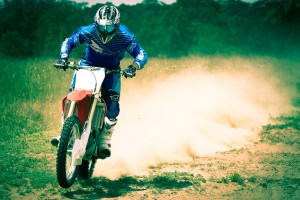 The 2007- and ’08-model Honda CRF450s were as good as any bike made at the time and dominated the open class motocross market. They were light, powerful, easy to ride and as durable as they come. As a result, the start line was often a sea of red.

But, by 2008, the bike had reached the end of its development cycle and Honda engineers were going to unleash an all-new CRF450 on the market in 2009. It landed to mixed reviews. The old bike that everyone knew and loved had been replaced by a bike that wowed with its newness but also struggled to meet the expectations of the market and the level of the previous model.

Race teams struggled with the 2009 bike. As with any new model, it takes time to work out the bugs, improve the strengths and iron out the weaknesses and it was a full season before Honda teams and riders got a handle on the new bike. Since 2010, the CRF450 again proved to be the choice of privateers. The world’s fastest privateer at the time, Chad Reed, elected to race a Honda after he test-rode every other bike. And, while the Honda 450 didn’t win many media shootouts in that 2009–2012 period, racers knew that an exhaust, some ignition mapping and a bit of fine tuning were all that was needed to build the bike into a race winner.

Why am I telling you this? Well, after a day on the all-new 2013 Honda CRF 450, I feel we’re headed down the same path. The new bike has plenty of new and exciting parts and changes but, just as in 2009, I think it will take time for teams and riders to get the most from them. That’s not bad; it’s just a new and different platform to start development and one which, just like the 2009 model, could ultimately lead to plenty of success. 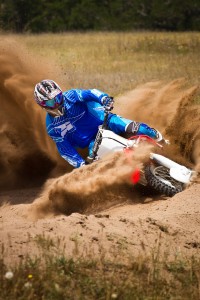 There is an awful lot of new stuff on the 2013 model and it probably would be easier just to list the things that weren’t changed. But, for simplicity’s sake, here is the new model’s highlights package. 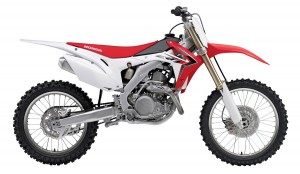 * Slightly heavier fly wheel has been added to reduce flame-out

* Frame dimensions remain the same but welding points, head stem and motor mounts have been updated

As you can see, there isn’t much left untouched with the new bike. It was Honda’s aim to increase bottom and midrange power, improve the handling — especially at turn-in — and keep the bike the lightest in class. On paper, the majority of those mods point that way, so it was time to hit the track and get a real-world feel for the all-new Honda CRF450R. 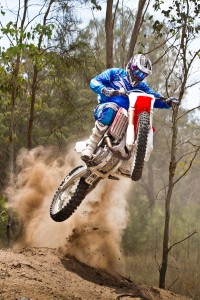 Does it feel the same?

I read through the updates a few times and never saw any mention of changes to the ergos but to me it felt like the rear of the bike was slightly lower than in years gone by, giving it a more “sit in” than “sit on” feel. It might be just the fact that every other bike feels flatter across the seat, tank and bar area. In any case, while it’s still comfortable and easy to move around on, if there’s one area where the CRF needs to be updated, it could be the ergo layout.

The levers and controls are top quality and light to pull, as always. The throttle cable could do with a quick-adjust capability on it while the rest of the bike feels and looks pretty good. From a visual point of view, it takes a few looks but it does grow on you and then, when lined up next to an older-model bike, it looks cutting edge.

Did Honda improve the bottom end?

Yes, no question the bike is sharper and livelier in the bottom end than the 2012 model. To make a ’12 model come alive, a few changes needed to be made or the motor could almost fall off the power, especially between shifts.

The new motor responds faster, has more grunt in the bottom end and generally gets on top of the ground much faster. I’ve already ridden the 2013 model RMZ and YZF and, while the CRF doesn’t have the outright pulling power of those bikes, it is improved and much more competitive right off the bat than in previous years.

It sounds like a trail bike. Seriously, the bike is amazingly quiet; if you close your eyes and just listen to it, you’d swear it’s an off-road bike, not a motocross race weapon. The bike meets all FIM and AMA requirements and we commend Honda for getting a bike so quiet without sacrificing huge gobs of power.

Now, I put this question here because, to a lot of riders, if it sounds fast, most think that it goes fast. That’s not always the case; it’s the opposite effect when a bike is quiet. Because the bike is extremely quiet, as a rider you don’t think you’re going that fast but that new CRF is deceptive. The motor is smooth and the exhaust is quiet so it doesn’t feel fast until you have to haul the big red beast down.

Don’t get me wrong; it’s not a top fuel dragster and I dare say it isn’t the most powerful in class, but it does get along at a deceptive rate of knots that will surprise many riders. 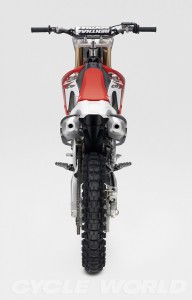 The motor comes on earlier, is sharper on the throttle and has more substance to its power through the bottom and lower midrange. On top of that, it’s quieter, so that’s a tick for it being a better motor than last years’ bike. The KXF would still be the motor to beat in the Open class but, for 2013, Honda might have closed that gap a little — but not enough to have the KXF rider shaking in his boots on the start line.

What would we change?

At the risk of contradicting ourselves, the first port of call for getting more power from the CRF donk must be the exhaust. Take a look at the size of the pea shooter holes on the back of the dual exhaust! Surely, this must be corking up some power. I also wouldn’t be surprised to see many of the aftermarket exhaust makers go to a single-sided exhaust.

Tell me about those air forks

Fork technology is coming at us thick and fast at the moment with SFF (Separate Function Fork) and now the air fork being introduced in the past two years. While KXF has an air fork in its 450, the one for the Honda CRF 450 is purpose built for this machine and different from that of the KXF unit.

In a nutshell, instead of a spring to control the height of the bike, the new fork uses air. While it was hard to get any information on it, the air measurement (in psi) for the standard fork is 33 and a change of every 2psi is equivalent to a spring rate change.

I started on 33psi, which we believe will be the standard setting from the showroom floor, and took a spin. They were way undersprung. The bike would dive the instant I hit the front brakes and then head shake like a wet dog. The faster I went, the worse it got, so it was straight back to the bike pump for some more psi.

With two more psi in each leg, it was on again and this time the bike felt better, although it was still really busy in the front end on deceleration, so I went two more and it was pretty good. The front stayed planted under brakes, kept front wheel traction in turning and gave a far better ride than the first setting I tried.

Just for the sake of testing, I did another two psi and this was too far. It became harsh at the top of the stroke, wouldn’t settle in turns and gave away too much feedback. I think most racers will find the 36–38psi mark in the ball park and maybe fine-tune any steering issues with the steering dampener.

Are these forks any better than conventional forks?

As it stands now, they probably aren’t better but they are the platform of the future so we’d better get used to it. I have a couple of criticisms: the first is they are very sensitive, so you must be careful when putting air in and out and ensure you measure it right; second, I want both forks linked so I can measure and change air from the one spot, not do each leg at a time and risk not getting it right.

The last is we now have so much external adjustments on dirtbikes I think many people will tune them to a standstill unless knowledge is easily accessible. Within a minute, you can change every setting in the ECU and fuel injection, take all the air out of your fork and drastically change the way your bike works. Guys like to tinker — I just hope they all have a basic knowledge of what they’re tinkering with and how that can affect the performance of their bike. And I can see the mini dads coming out with fork tampering claims in years to come.

How is the overall handling?

Once I got the front up a bit and found a setting in the fork I liked, the overall handling of the bike was quite good. Even though the bike is a touch heavier than 2012, it still gives a very light and flickable feel, especially for a 450 — and that’s something you can’t fake or hide. It has a light feel about it that makes it change directions quickly, a BMX-like feel in the air while jumping and a predictable rear end on fast, choppy ground.

The weight of this bike and previous CRFs can’t be underestimated. It’s a good four to five kilos lighter than any other 450 motocross bike on the market and, make no mistake about it, every other brand wants to get their bike to weigh the same as a Honda. With the radiators lower this year, there appears to be a lot of space under the tank and, from a rider’s point of view, it even gives the visual effect of being light.

Honda has produced a solid, likeable, mainstream bike that few people will find offensive. The motor has pumped up the volume in the low end and that only makes it easier to ride. Combine that with a light feel and generally soft-ish suspension, very little vibration and deceptive top end and it gives off a built-for-comfort vibe.

But once I got the hang of it, pumped up the fork and rode it with some aggression, some race heritage started to surface. For all its newness, the 2013-model CRF450 isn’t head and shoulders better than the 2012 model but, just as in 2009, it’s a new platform to start development with and the true performance of the bike will be revealed as that development cycle continues.