The 2013 CRF 450R has had a major overhaul; with a new look and a host of changes underneath it harbours plenty of promise. Welcome to part one of Australia’s most comprehensive review on the 2013 Honda CRF450R

The all-new Honda CRF450R bike has already won events in the hands of Honda’s fastest racers adding to the anticipation of its release. When it showed up at the DA headquarters we were more than keen to hit the track and see what Honda’s new open-class weapon had to offer. The list of changes is as long as your arm, so we’ll sift through that first. 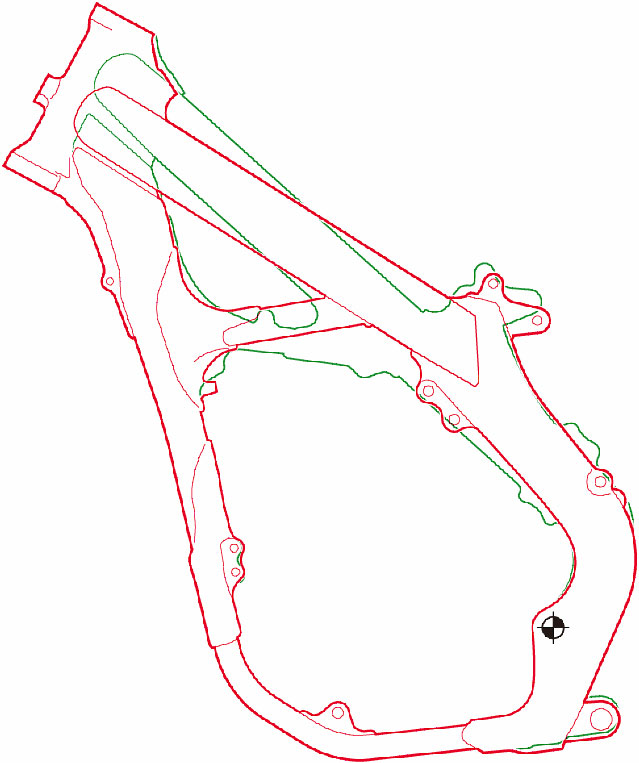 The new frame was redesigned from scratch with the goal of improving mass centralisation. This not only included the main frame but also the subframe and the new dual muffler exhaust. There is a noticeable difference where the frame meets the head tube: this intersection is much lower than the 2012 model which is said to maintain rigidity while lowering the centre of gravity. The footpegs have also found a new home 5mm further to the rear. 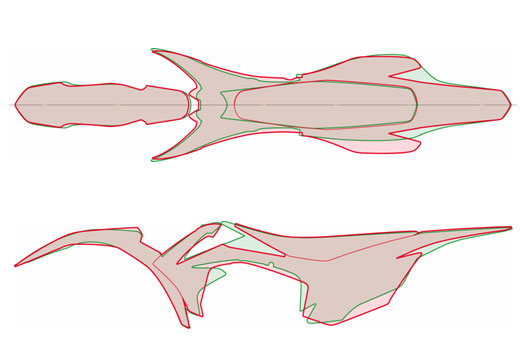 Fresh, sharp lines feature on the new Honda. There has been plenty of thought put into the bodywork, a high priority being a seamless feel for the rider. The radiator shrouds are designed to improve air flow into the radiators while the fenders have been designed to be rigid while minimising weight. 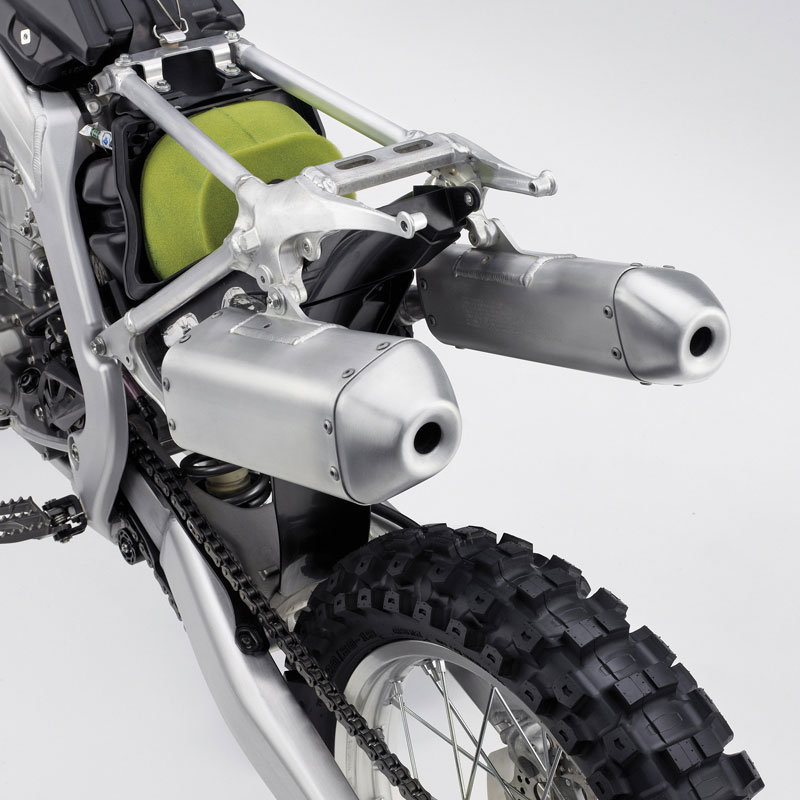 One of the first things you notice on the new CRF 450R is the return to dual mufflers. By returning to this design, Honda claims it not only makes for a laterally better-balanced bike but also allows the mufflers to be shorter and more compact. This in turn allows the mufflers to be tucked in closer to the centre of the bike, which helps with the goal of improving the centre of gravity. The dual short mufflers also actually increase the silencer capacity over the usual single muffler which allows the bike to meet noise restrictions more easily.

The inertial mass of the ACG flywheel has been increased by about 11 per cent to improve torque feel through the bottom-to-midrange power delivery.

There is a new six-spring clutch inside, offering increased durability and, more importantly, improved feel. The change should see the clutch staying more consistent throughout the duration of a race.

A redesigned air boot has been fitted to the CRF; it’s slightly straighter and smaller in diameter to help increase throttle response along with allowing maximum performance at high rpm. 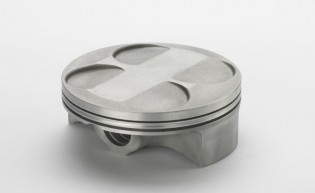 There is a new piston inside, too. The adjusted shape of the piston has resulted in an increase of compression from 12:1 to 12.5:1 which raises power output. A new coating also reduces friction. The new piston shape also tightens the clearance between the piston and the cylinder, improving the seal during combustion and adding performance.

Keeping in line with the goal of lowering the centre of gravity on this bike, Honda has also gone to work on the rear shock. Its total length has been shortened by 14.5mm, which leaves the body of the shock that much lower. 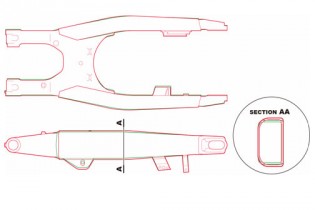 The swing arm has been redesigned to improve rigidity and improve rear-end handling and feel. Adding wall thickness to specific areas has allowed Honda to control the horizontal and vertical stiffness to ideal levels. 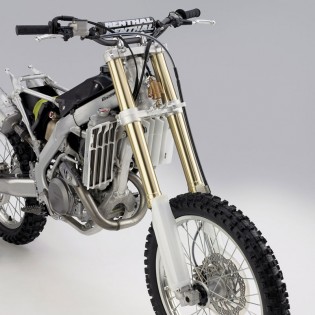 Honda has gone with KYB’s new 48mm Pneumatic Spring Fork (PSF) for the 2013 CRF 450. These forks feature compressed air in place of the regular fork spring, reducing their weight by almost one kilogram. Removing the fork springs is claimed to reduce friction, which improves performance. No springs also make room for larger-diameter pistons, from 24mm to 32mm, allowing for better control over the damping. Adjustability is also greatly increased by the capacity to simply add or remove air pressure to adjust the stiffness of the fork. Previously, that would have required a spring change.

The forks also have an exclusive cap that features an angled compression adjuster that allows adjustment no matter the handlebar position.

To give you an insight into the differences between the 2012 and 2013 model CRF 450Rs, here are some comparative illustrations showing the details. If you look closely you can see how Honda has tried to compact as many components as possible towards the centre of the bike. Red is the 2013 model, green is the 2012. 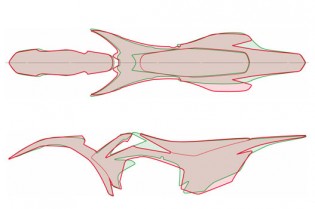 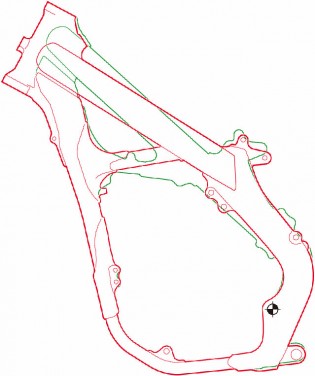 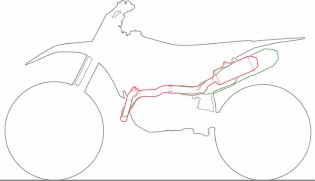 As soon as I sat on this bike it felt like a compact package. Even though technically it should feel very similar to last year’s bike as far as width goes, this seemed to have a nimble feel before I even started it. It felt more like I was sitting on a 250 rather than a 450. As you look down from on the bike there doesn’t seem to be much there. The new shrouds use minimal plastic and I think that helps trick you slightly into thinking this bike is small.

It fired up without any problems and didn’t take too many laps to feel comfortable on it. The first thing that stood out to me on track was the exhaust note: there’s no real bark from this bike. It’s pretty quiet, almost with a trailbike note, which can deceive you into thinking there isn’t much punch, either. That’s not the case; it’s a very smooth delivery but there is plenty of torque on offer as you would expect from a current 450.

The controls all do their jobs well and the new six-spring clutch has a good positive feel without adding any weight to the pull of the lever. The forks have a nice action; they probably could have done with a few psi extra to hold them up better under brakes, which I will certainly test next time we get out on this bike. They seemed to resist bottoming well and didn’t deliver any unexpected moments when I was riding.

I had no issues with catching my pants or boots on any of the plastic and seemed to be able to move around on the bike without any problems. I must admit, looking at the bike before I rode it I thought I may have a chance of catching my boot on the front point of the radiator shrouds in deep ruts, but there was no such issue. I didn’t notice the twin exhaust and the bulging side panels on both sides at all when I was riding, another thing that you think may happen when you look at the bike on the stand.

Overall, for a quick few laps on this bike I was impressed, I’m very keen to spend some more time working with the fork settings and then in turn with the rear setup, too. I must admit I’m a little sceptical of the pneumatic spring forks as far as durability goes; a leaking fork seal on a spring fork isn’t ideal but you can still ride. As far as I understand, a leaking fork seal on PSFs will leave you with collapsed forks and unless you can change fork seals on the spot you’ll be packing up and heading home.

I was surprised at how usable the power is on the new 2013 Honda CRF450R. For me, a real aggressive 450 is a blast to ride but easy to get into trouble and beats me up quickly trying to hang onto it. The Honda has a strong broad powerplant that feeds the power on smoothly, but is by no means lacking in power — it has a good, manageable 450 engine. When on the bike, I was surprised at how slender the new Honda is; I have spent time on the KX450F and also the YZ250 two-stroke as project bikes recently. It’s very easy to move around on when in the saddle and I was comfortable on it straightaway. The CRF feels closer ergo-wise to the slender YZ than the KX — it’s that slim. The big plus for the air fork is it allows riders to save money on heavier springs straight up, as most guys are too heavy for standard springs when they pick their new machine. There are obviously questions around the fork, but time will tell and hopefully it’s a proven design. It’s pretty amazing at how the fork can change the entire characteristics of the machine via a few psi changes, so I’m looking forward to hanging on to this bike for a while to see how it all works.

I’ve always liked the CRF450R, mainly for the fact it’s one of the least intimidating 450s when you’re trying to push hard on an MX track. For that reason, it’s even been the weapon of choice for many off-road and enduro professionals over the years, especially in desert racing. This is the bike that once dominated the entire podium and most of the top 10 in the Finke Desert Race. The CRF450R has always tracked straight as a rocket when the throttle’s wide open, which suits the flat-out conditions of Finke.

The 2013 is still the compact, agile machine of years past, but the new engine is definitely punching out more grunt from the bottom to mid, which was the main difference I felt over the 2012 model. It’s a great combination of bulk torque and smooth delivery, so you don’t get arm pump in the first five minutes of swinging off the thing, despite the fact it accelerates so hard.

The handling of the bike is typically CRF450R but has the flighty feel of a two-stroke when the rear steps out, no doubt from the two tucked-in mufflers and springless air fork reducing the overall weight and centralising its mass. As for the air fork, I can’t say that the front end feels any better than the previous Hondas, despite the reduced weight contributing to the bike’s agile feel. The main thing that concerns me about this fork is how it will cope in an off-road environment, where you can be racing for up to six hours in the day through terrain that will inevitably perish your fork seals. The fact this fork is dependent entirely on fork seals suggests the bike will become unrideable once the seals leak.

Dropping two to three psi of pressure in the fork is effectively decreasing a hypothetical spring rate. With a standard pressure of 33psi, dropping just 3psi is a large percentage of its volume. I would hate to ride a bike that could basically alter its spring rate over the course of an event — especially as it will drop its ride height and become a tank-slapping nightmare. That’s the last thing you want in the back of your mind before a 240km charge down the Finke track. At least a conventional spring fork will maintain the bike’s ride height, regardless of pumping out oil through a blown seal.