Bit of Both: Ride in the trails on Sunday, cruise to work on Monday – Honda finds replacement for missing link. 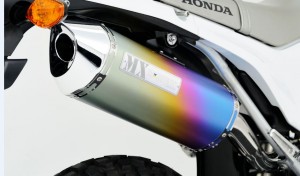 It was a sad day for trail riders when Honda announced the XR range would no longer be produced. The humble XR250 was the hardiest of trail bikes and something often suggested to learners entering the first stage of trail riding. The CRF250X is a worthy machine, but a more race-oriented bike with higher maintenance costs and more potent engine than that of the XR, forcing many beginners away from the red ship and onto a DR-Z or TT-R.

Honda has addressed this missing link in its arsenal by producing the all-new Honda CRF250L. The 250L is the happy medium between dirt and tar, closer to the old XL range than the XR, but still dirt ready none-the-less. It’s equipped with dual-sport tyres, has a low seat height and a nice comfortable seated position.

We tested a brand-spanker according to what we believe the majority of riders who buy this bike would be looking to do. There’s no point dragging this bad boy up vertical climbs, launching mammoth drop-offs or rut-infested single trails; we headed for a nice and easy trail ride and spent plenty of time on dirt and tar roads. 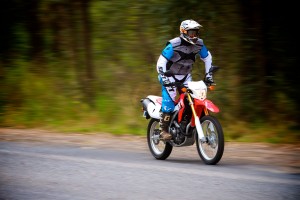 Bang For Your Buck

Now, before we get too far into this review, let me get one thing straight. This bike is hitting Australia with the introductory price of $6030 — an absolute bargain as far as I’m concerned.

The engine on the CRF250L is the same as the CBR250R road bike and is a liquid-cooled 250cc four-stroke tuned to perform best when at the low-to-mid RPM range. The fuel-injected engine is designed to be not only reliable, but to also feature good fuel economy and be environmentally friendly; 02 sensors and a catalyser help in that regard. This engine puts easy-to-use power to the ground but is designed at the entry-level rider. If you’re looking for a ball-tearing 250F, then jump up the Honda range to the Honda CRF250X; if you are after something nice and easy to ride with a tame and polite power curve, this bike is for you.

On the road, it has plenty of power at the bottom to get up to pace when pulling out into traffic. It’s comfortable to sit in the saddle and I would be more than happy to spend an hour or so cruising on the black-top on this machine. The main road in and out of where I live is very windy and smooth and I could run laps around the estate without a care in the world. The seat is nice and soft and very wide, which adds to the comfort.

There’s little excitement coming from the engine if you’re an experienced rider, yet it’s the perfect little power plant for a rider new to the sport or after something that’s just easy to jump on and cruise aboard. An exhaust and maybe some work with the gearing and this machine could be a little more aggressive; it feels pretty choked up. 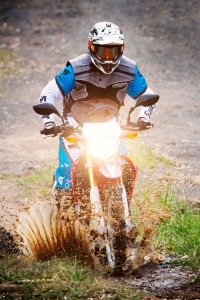 The CRF250Ls frame is a twin-tube steel structure that feels pretty wide between the legs. The suspension is designed to cope with both the trails and the tar. The fork is an inverted 250mm design and the shock has 240mm of stroke via a pro-link shock.

The suspension is fine for fire trails and dirt roads or for tackling some single trails at a moderate pace. It handles the small bumps well, yet is comfortable and confident on the tar too. If you are a bigger guy or are pushing hard, you will find the limits of the suspension. If you are considering a bike like this, there’s a good chance you won’t be attacking snotty up-hills and gnarly log jumps and you’ll find it has a good suspension package for what it is designed for.

You can feel the weight of the Honda when you stop or are pushing the bike, but when you are on board and cruising along, the weight is just a number. It’s actually quite nimble and easy to turn tightly. I wouldn’t like to be lifting it over logs or lifting onto a box stand too often. On the flipside, the extra kilos give it a planted feel on the tar.

A multi-function digital computer sits proudly in the cockpit of the CRF250L. Just in front of the handlebars you are presented with an easy-to-read fuel gauge, a trip odometer, and the best and worst part, a clock. You will have no excuses to return to see the misses after a quick arvo run on the CRF, but you also won’t miss the footy.

The CRF250L is a pretty sweet-looking machine. Sure, it doesn’t ooze the badarse aesthetics of a full-blown motocross bike, but it looks pretty cool. The design replicates the new look of the CRF450R and, in turn, has a modern appeal. The rear guard features cargo hooks to carry a small amount of luggage or a couple of bags from the shops.

I had fun with the Honda CRF250L. If you’re after a smaller dual sport machine, then you’re on the money. It’s well suited to trail riding, not hard-core enduro riding, and if you’re after a bike to kick off your life in the trails or to go for a squirt on the tar and ride to work, then I think you’ll be pretty darn happy with the Honda CRF250L. And for $6030 it’s hard to go wrong with this machine; it’s not an enduro race bike, it’s not a road bike, but it will happily do a bit of both with ease.