Each year, rumours start to fly regarding a new Husky TC250 with an ultra-powerful engine and a cutting-edge design, but those rumours never translate into reality. Sure, there have been plenty of changes made to the little Husky, but the reality was that the bike, while light and compact, was slow and not competitive enough in the balls-and-all Pro Lites category.

Every year there has been some disappointment when testing Husqvarna’s new bike. A slow 250cc is torturous to ride. So, when Husky called the press for the new 2012 model and distributed info on the new bike, it was pretty hard to get excited given the history. After a day of testing, however, I’m man enough to say I was pleasantly surprised by the new model and came away believing the Husky is a much-improved bike.

All major components on the 2012 model got a work over or, at the very least, a work out. The engine gets a lighter piston, new cylinder head and valves, new exhaust and updated airbox. The suspension, now KYB (since 2011) received new valving and spring rates as well as updates to the frame. It may not be all new, but there are enough significant changes to make a real difference on the track. 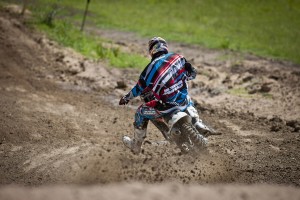 In a nut shell, it’s competitive. After years of being well behind the eight ball in terms of power, placement and delivery, the 2012 model offers a modern style of power and a decent amount that suits Australian conditions. Typical of most manufacturers’ early attempts at EFI, the power is bottom and mid-range focused but is far stronger than previous Huskies and in the ballpark of its rivals.

The top end runs a little flat but thankfully doesn’t hit a brick wall. It maintains reasonable power high in the rpm and will rev if needed.

One thing the EFI, as well as the lighter piston, has done to the benefit of the engine is sharpen the delivery. Older models had a slow, almost off-road turnover of rpm, but the new bike responds far faster, turns quicker rpm and has some energy about it. The engine is definitely a step in the right direction for Husky.

How does it compare against its rivals?

The KX250F is the king of the class with power all over the range. The remaining four bikes (RMZ/ CRF/ YZF/ KTM) are all pretty similar in terms of the amount of power each bike puts out. The Husky would slide comfortably into that group, matching most and beating some.

Where did the extra power come from?

The Australian Husky techs believe the increase in power has come from the newly designed head. The factory brought in the right people with the right knowledge to get the most from its engine, which certainly has paid dividends.

After years of mucking around with Euro-built suspension, Husky bit the bullet and mounted KYB forks to the bike for the past couple of seasons. Husky finished the deal this year by installing a KYB shock as standard equipment. At least the components are high quality and it’s now up to Husky to spec them right.

The fork is much improved. After the TC250 spent years being under-sprung and soft, the 2012 units have good spring rates and a decent action. A .46kg fork spring comes stock and is right for riders in the 75kg range. Our test bikes still had a new feel about the action, but the firmer action at least let riders attack the track with a little more aggression and have some confidence in the front end.

The .46kg springs are also important as the front brake has a 260mm rotor standard and as a result the front brake is quite strong. There’s nothing worse than having a strong front brake combined with a mushy fork because as soon as you hit the brakes going into a turn, the front dives and doesn’t recover. The forks are good.

The shock is also far better than previous models. The old Sachs shock just didn’t gel with many riders, but the new KYB unit is a known quantity with a proven track record. The fact that it works well with the chassis and the fork of the bike means the new TC250 is off to a great start. Setting the ride height at 100mm is a good and simple start and allows the bike to hook up well, particularly on acceleration.

The frame has also been beefed up in the steering stem region. It has been a complaint of Husky riders that the old frame flexed a lot and as a result it stretched enough to change the handling of the bike. We can’t comment on the future, but the increased steering rigidity does help the cornering precision while new.

Are the ergos still a quirky euro setup?

In the past, I have often complained about the seating position on the Huskies. I always felt that even though I sat at the very front of the seat, I still wasn’t far enough over the front of the bike. In 2012, the cockpit has been refined with new triple clamps, sleeker feel and a change of position of the footpegs and it’s all for the better. It feels more modern to sit on, more aggressive to ride and allows the rider to be more authoritative when controlling the bike. 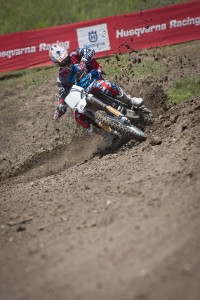 What do we really think?

The promo pack says “the most competitive 250 motocross bike offered by Husqvarna” and they are absolutely right. The changes made to the bike were exactly what were needed to make it a viable option to the racing public. The engine is faster, accelerates harder and runs cleaner with more power. The chassis and suspension are firmer and stiffer and more race-oriented. And that is probably the biggest benefit. I have always felt Husky made and designed a good off-road bike first and then tried to make a motocross bike from it, whereas this bike feels like it was designed and developed for motocross with no compromise.

It’s not perfect and there’s room for improvement, but there’s no question it is a huge step forward for Husky. It’s a competitive bike off the floor and something that will work in Australian conditions. Just like the heading says, I was pleasantly surprised.