Two-Bang Berger: The Husaberg TE250 is one of many choices in the 250 two-stroke range. Is it the bike for you? Why the hell not, we reckon.

First of all, let’s not pretend that when Yamaha released the YZ400F the world stopped spinning and all the two-strokes fell off. In the years after its release, the Japanese may have fallen out of love with the two-stroke but the Euros were smacked by Cupid’s arrow at a ratio of 60:1.

The two-stroke obviously isn’t as strong in numbers as it once was but it’s every bit the potent and relevant machine that it always has been. In fact, we’re presently spoiled for choice when it comes to quality smokers and if you’re a trailrider or enduro gun, then you’re on a European bike.

From Gas Gas to TM, from Husqvarna, Ossa and Fantic to KTM and Husaberg, there remain plenty of machines to sling a leg over. We recently spent some time on the Husaberg TE250 and if you want to know what we think of it, wait no longer — just keep reading. 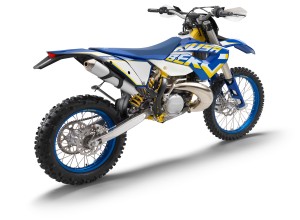 Many of you may be under the impression that the Husaberg is just a blue KTM. To be honest, it mostly is, but that’s not the whole story and it undersells the ’Berg a little. If you happen to choose blue over orange, it’ll be because you want the closed cartridge fork — yes, please. Or perhaps the ignition switch, flex levers, slightly larger fuel tank or slightly taller seat height and increased ground clearance. Or maybe the machined triple clamp. That’s the difference between the Husaberg TE250 and KTM250EXC.

They might not seem like a lot of important details and by and large they aren’t. The closed cartridge fork is, however.

For many years the trail/enduro crowd has been fed the discarded technology of the motocross machines. We have to wait until it’s done its time on the tracks before it appears on the trails. Sure, there’s a few examples where enduro bikes have led the way (EFI being one) but generally we run slightly downgraded equipment compared to our motocross brothers. Much of this has to do with the need for a less intensive maintenance ritual in the bush and makes perfect sense.

The closed cartridge fork on the TE250 is an example of a motocross regular visiting the bush basher’s world. What you get with the TE’s fork is a unit that’ll be better suited to hard hits and hard riding. The softer setup on the KTM would better suit the casual trailrider but the ’Berg will accommodate the rider who pushes the limit more.

Riding the TE250 is good fun. It’s got plenty of poke right through the range and the torque to tiptoe through trail crap or up snotty hills. The engine is superb for a range of conditions and with a bit of clutch you can launch out of corners at a fair velocity. The variable ignition is an asset and the supplied switch on the ’bars is something Kato owners have wished for.

Our test bike was brand new and as such it was stiff. The front felt a little flighty but I reckon that’s because we were the ones who introduced the TE to the dirt. It’s not ideal, but having ridden TEs plenty of times I know the front isn’t usually that harsh or skittish.

The electric start is something that will draw buyers — and why not? It’s bloody handy. I actually kicked it a fair bit and never had trouble starting the bike; nor did it ever cough with the e-start button.

The clutch is light with plenty of feel and the Brembo brakes are the best in the business. The ergos are excellent and through this the TE really just lets you get comfortable and concentrate on riding. Get up the front and the TE will plant in any rut and stay there.

The gearing was good for the range of riding we did, which stretched from single track to motocross and wide-open fire trails. 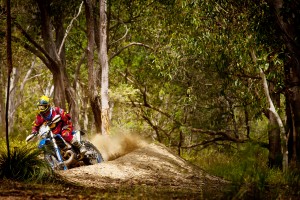 All That And Then Some

The TE250 is a well-sorted machine that comes from good stock. The family tree houses a pretty impressive pedigree, after all. It would make an excellent race bike or trailbike for the bloke who hits the dirt pretty hard. It probably doesn’t suit the casual rider as well as the KTM but this is just finding a point of difference between what the two fork setups offer.

The TE250 was a fun bike to ride, especially in single trail. It takes a bit of clutch to get it to really take off; it’s not as gutless as a 125 is at low rpm and the power isn’t quite as broad and usable as a 300.

I had fun when riding it in the tight stuff; it sticks in ruts very well and loves to be revved and thrown into a nice loamy turn. The suspension is quite well balanced. And although I didn’t push it overly hard, it feels to hold up well in the stroke yet not feel too harsh. Riding it on open fire trails was less enjoyable for me. It vibrates a fair bit compared to a four-stroke but it’s by no means a massive turn-off; it just takes a little getting used to if you don’t ride two-strokes often.