Heavyweight Champion: Husaberg has gone a long way to revitalising the big-bore market with its FE 570. If it’s power and glory you want, look no further.

Australians love a big bore. Whether it’s a five-litre V8 or a lawn mower with a 454 big-block jammed in, we love our steak sangers big and our engines even bigger.

The same goes for dirtbikes. Aussies love their big bikes and always have. The XR650 sold by the bucket loads, the Husky and Kato thumpers are everywhere and Husaberg has what might well be the best big-bore ever made on its hands.

We spent some time on the bad boy to find out what it offered and whether we should all be upsizing. 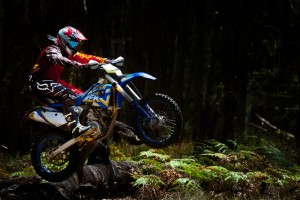 You all know the story: the Husaberg was kinda good, then kinda crap and now it’s kinda weird but damn good. The engineers stepped back, reimagined the entire range and released what we’re now so familiar with. The odd design that got so much attention initially has lasted and excelled; they just got it right in so many departments that first time.

The FE570 is the biggest of the blue-and-yellow crew by some margin. You might be wondering just why you’d need all that muscle and whether you can in fact handle it. Let’s get straight to the beauty of the Husaberg: it’s big but it doesn’t feel big. That’s the magic formula big-bores have been chasing since they were first devised by a crazed engineer with a fetish for cubic centimetres and no regard for his own life. Yeah, the power’s fun, but if the bike’s as nimble as a limbless wrestler then what’s the point?

Gas Gas did a damn fine job when it released the FSR515 but that wasn’t long for our shores. Husqvarna’s always been up there without quite topping the rankings, although that current TE511 is very good. And then of course there’s KTM’s mighty EXC. It may have changed its manners a little over the years but the 2012 500 EXC is a good honest big-bore again with some fire back in the belly.

However, in my humble and too often shared opinion, the Husaberg FE570 is the standout machine in the heavyweight rankings — and I’ll tell you why. 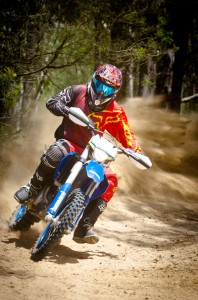 The suspension on the ’Berg range is the best package in the off-road world today. The excellent fork and clever frame/shock design work so well on the 570 and go such a long way to convince you that you’re on a smaller bike.

Then you have the engine. It sounds like Tom Waits. Nobody in a white coat thought they should calm the bark and that’s good. It’s not loud; it’s just aggressive and straight to the point. No mistaking this for anything but a big-bore.

The power is magic in its delivery. The Husky TE449 is the smoothest overall but the ’Berg isn’t far behind. Its ability to hold traction even when you dump a handful is so impressive but, whatever you do, don’t take this as a sign of meekness. You go grabbing more than any situation allows and you’ll take a little sit down in the bush while the 570 continues on without you.

We did find the engine had an odd flame-out now and then early in the throttle but couldn’t find a hole in any other points.

For 2012 the frame has been painted yellow, which I don’t much care for. The actual frame, however, is a clever piece of engineering that’s there to compliment all other major components on the 570. Given the mass centralisation achieved by that slanted cylinder, the ’Berg was on the right track to begin with, but a dodgy frame can ruin everything. It’s a credit to the engineers that they pushed themselves to make sure the suspension, frame and engine all work together and didn’t compromise in the effort to produce a complete machine.

Four-fifty owners might be surprised to learn that in many cases the 570 is easier to ride. On all but the twistiest tracks, the weight seems hidden; in all but the gnarliest terrains, the bike’s easy to keep in check.

There is a point — on hills, say, or rock shelves where you might end up dropping the bike or having to prop it up — that you’ll get a reminder of the size of the ’Berg, but overall the 570 rarely burdens you with its weight issues. Imagine Oprah the gymnast and you’ll get what I mean.

Husaberg has truly nailed it with the FE570 and I couldn’t recommend another large one over it. It turns, it climbs and it can frighten you. It sounds cool, rips open tracks like nothing else (oh, man, it’s good on fast open turns) and packs all the top tech gear.

This might sound a bit odd, but if you’re drawn to the FE450 because you want the power of an Open-class bike, just give the 570 a go as well before you lay down the cash. I reckon it’s a better bike and it should be remembered as one of the greats. 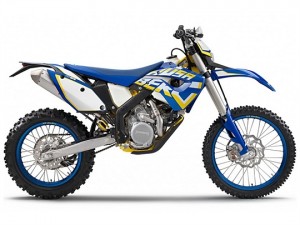 I have limited experience on riding big-bores in the bush, so I wasn’t sure what to expect jumping the ’Berg 570. I really like 450cc enduro bikes but the 570 sounded intimidating. Damo assured me it wasn’t as scary as it may have seemed; he was right.

I liken riding this thing to driving a turbo diesel car: it’s not super quick off the mark but as the revs and momentum build it hurls shrapnel out the back and turns the tree line to a blur. Click it up a gear and the grunt of the engine will pull you out of the trickiest of situations. You don’t need to work hard unless you want to and despite its large capacity you’ll find it difficult to feel much of a weight difference from a 450.

If you’re into power slides and fast open trails, throw your leg over this thing and you’ll be in for some serious fun. — Matt Bernard 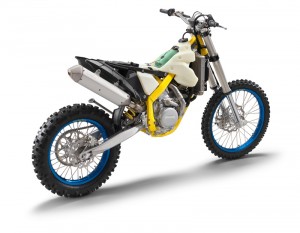