16year old Cody Dyce has taken his maiden MX Nationals round victory at round two of the series held at Appin Raceway over the weekend. Competing in the MXD (Under 19) division, Dyce stood atop of the podium after an intense day of racing on a difficult racing surface.

On board his Yamalube Yamaha Racing YZ250F, Dyce overcame a first turn pile in race one and wet and muddy conditions in race two at log the round win and move closer to the championship lead after two rounds.

Moto one saw Dyce down in the very first turn with several other riders but re-joining the race in near last position. He then unleashed some fury in the next three laps as he tore through the 40rider field to be in fifth as lap four got under way.

But that charge took its toll on the rookie Victorian racer and his momentum was halted as the race wore on. He continued to fight but with his arms pumping up, he was only able to salvage a seventh- place result but he was clearly disappointed in where he finished.

Race two took on a completely different completion as light rain had fallen on the racing surface just prior to the start of the second MXD moto making it extremely slick and difficult for the inexperienced riders to get around. But Dyce handled it like a pro. He roared into the first turn, demanded the lead and instantly gapped the field. 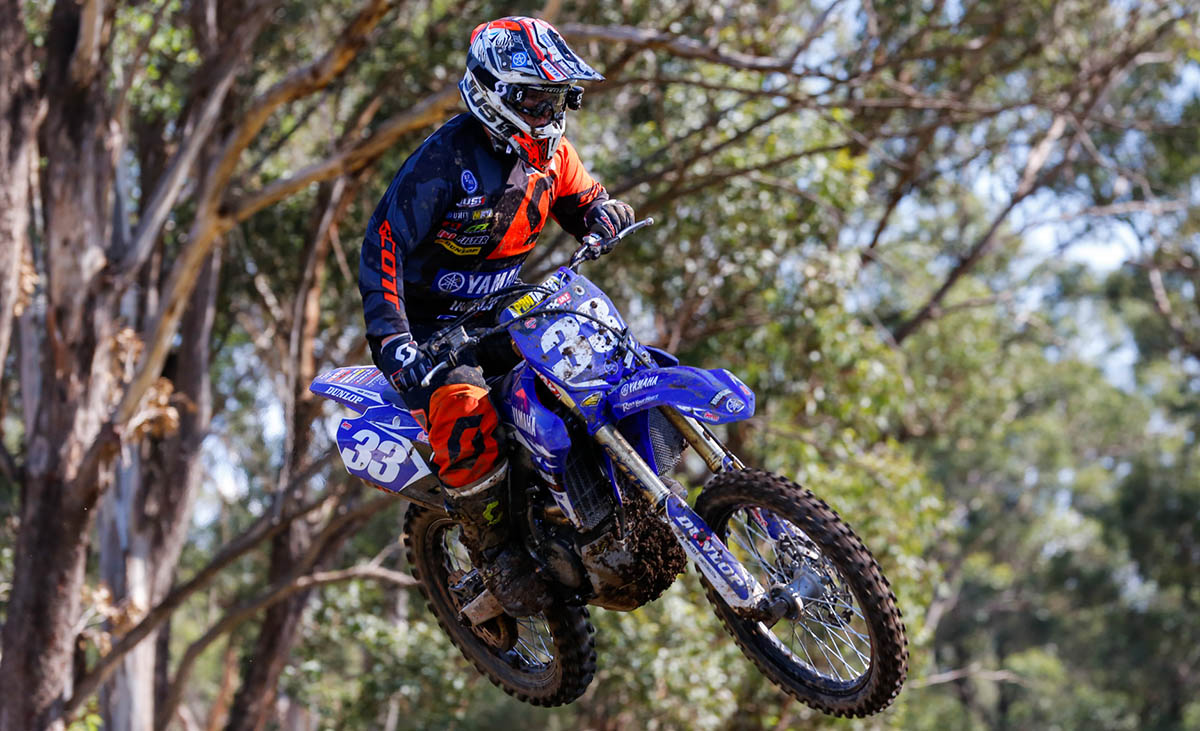 His lead was out to over 15 seconds in the early stages before he fell in the sticky mud on one of the long Appin down hills. He was able to remount his bike, retain the lead but with his clutch lever bent and twisted and his left-hand grip torn from the bike.

But it was then back to business as usual for Dyce who picked up where he left off and proceeded to open up a 20 second margin over his nearest rival by the final stages of the race. Dyce took the win and his combined 7-1 results produced an unlikely overall round win that had the young Victorian speechless when informed of the result.

“With a win in the last race, I was thinking I was probably going to be third for the day but happy to ride well in race two but when they told me I won, I couldn’t believe it. I’m stoked about that!

“Race one wasn’t good. I corked my leg in the crash, ride like a madman for two laps and then an idiot for another 10 laps so I was pretty determined to finish on a good note in race two.

“When I saw the rain came in, it didn’t both me as I don’t mind racing in those conditions so I just got out there and went for it.

“It’s awesome to win a round so early in the season and a huge thanks goes to Cory and Mike who busted their but all day keeping our bikes in great shape,” Dyce said.

It was a contrasting day for team mate and round one winner, Cooper Pozniak, who came home in fifth place for the round after two fifth place positions in each of the motos.

Pozniak again showed plenty of speed and was well placed in both motos only to make some costly mistakes that robbed him of any chance of a podium finish.

Moto one saw the red plate holder charge down the big hill in the top four on the opening lap and looking to gain a position. But has he entered the turn, the bike got cross-rutted and Pozniak was ejected spectacularly as his bike flipped through the air. He quickly remounted and began the long haul back through the field to finally land in fifth place.

Moto two would be one that Pozniak would like to take back. In the top three in the opening laps, a series of crashes in the wet and slimy conditions saw him yo-yo between fourth and eighth for the remainder of the race until a last lap burst saw him move back into fifth place.

Despite the tough round, he still holds the championship lead as we move onto round three.

“I’m just frustrated at myself,” Pozniak fumes after the final race. “Every race I was in the top three and I threw it away trying to make things happen when I just needed to be patent, consolidate my position and let the race come to me.

“If I’m ever in the same position again, I won’t let that happen as today was a steep learning curve for me and one that I will never forget. The team had my back all day and thanks to them for the huge amount of work they had to do to keep us going.

“If Conondale was tomorrow, I am ready to go and I want to redeem myself as fast as possible,” He says with determination.

The rolling hills and green grass of Conondale in the Sunshine Coast Hinterland host round three of the MX Nationals on May 7.